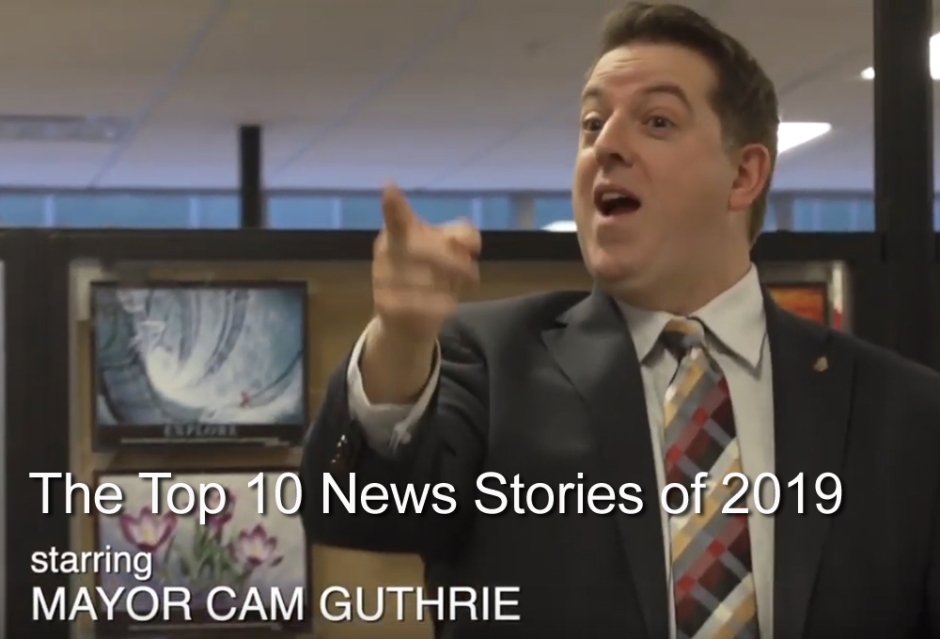 The year is coming to close, and the non-stop news cycle is about to go on a holiday hiatus. There’s been so much news to cover these last 12 month that it’s hard to nail the Top 10 stories of the year, let alone rank them all in order, but that’s the cross we bear in the news business at this time of year. So, without further ado, shall we get to the Top 10 political news stories in Guelph for 2019?

He was one of Guelph’s most beloved older statesman, his advice and insight was sought by many community leaders in the Royal City for the better part of the last six decades, but 2019 was the year that marked the passing of William Winegard. From his days leading the University of Guelph, to his two-terms as Member of Parliament, to his commitment to volunteerism and public service, Winegard left an indelible mark on his adoptive home. There’s a school that bears his name in the east end, there are lots of reminders of his days at the U of G, but what will endure is the human connection he made with everyone that met him.

After key votes in 2018, the planning for the new main library went into detailed phasing and community engagement, and everything was going well until the Ontario government started futzing with the Development Charges (more on that in a minute). Then, in the summer, a report came back to council suggesting that the budget for the library should be capped at $34 million instead of the originally approved $46 million, but that was reneged in a new report in September when staff suggested a hard cap of $67 million for the project. The new, more expensive price tag started to break the united front, and with the changes to DCs, plus a growing list of demands for infrastructure funds, a new library seems less certain this year than it did this time last year.

For local transit users, the year started with a hopeful tone with the eager embrace of the recommendations from the Transit Service Review, but at the end of the year, when the bill came due, some members of council balked at the price tag of expanding transit. In regional transit, the addition of two new trains on the Kitchener Line caused initial disruption in the commuting routines of travelers, but by the fall there were more trains going to Toronto and back in the afternoon and evening. Elsewhere, the great Wroute experiment failed, but Wellington County is experimenting with its own ride share, and two new buses will be running from Owen Sound to Guelph in the new year. Is this progress? Let’s hope so.

The 2019 Federal Election gave the national media a lot to cover, but there was a lot going here in Guelph too. This riding had a total of nine candidates running to replace the incumbent Lloyd Longfield, and although they were unsuccessful, the election did lay out a number of insights. Green Party candidate Steve Dyck failed to capture Mike Schreiner’s universal appeal, but he did finish a strong second, which secures the Greens as a local political power. The Conservatives drifted to third after running another low key campaign that focused on door knocking over debates and media appearances, while the NDP had a strong candidate, but had maybe not so strong support. People’s Party candidate Mark Paralovos got over 1,000 votes, and the two ferociously pro-life candidates got over one per cent of the vote between them, which should send a message to Guelph voters that the fringe is alive and well here.

Guelph is a university town, and the University of Guelph was hit hard by the unveiling of the Student Choice Initiative in January. The move allowed students to opt out of select student fees including government, campus media, and university clubs, but excluded sports and key services like universal transit passes. For groups at the U of G, it meant a loss of over $500,000 in fees for the fall semester as over 8,500 undergrad and post-grad students opted out of at least one fee. It cost the city an annual Halloween food drive that raises thousands of pounds of donations for the food back because the Central Student Association couldn’t afford to run it this year. In November, a court overturned the Student Choice Initiative and student groups across the province breathed a sigh of relief, but for many, the damage has been done, and it will continue to be done as the Government of Ontario appeals the decision.

Guelph saw turnover in three high-profile leadership positions this year. The City of Guelph announced that Derrick Thomson was leaving the Chief Administrative Officer position in February, and his responsibilities were assumed by Scott Stewart, the Deputy CAO of Infrastructure, Development and Enterprise, in the summer. Gordon Cobey was hired as the new Chief of the Guelph Police Service in January, and officially assumed the responsibility in the spring upon Chief Jeff DeRuyter’s retirement. And finally, the Chamber of Commerce saw its President and CEO Kithio Mwanzia chose retirement from his position, and was succeeded in the fall by Shakiba Shayani, who hosted her first all-candidates debate just a few weeks after she was hired. That’s a lot of new blood, and not to sound morbid, but you have to wonder who’s next in 2020?

The 2020 Budget process was always going to be a difficult one, but the percentage of difficulty went up significantly when the Guelph Police Service asked for nearly 10 per cent more money over 2019, and at a time when the City was asking all departments to cap their increases at two. Chief Gordon Cobey made the point that the increase was needed to better cover a growing city, and ease the dependence on overtime, which has been burning out a lot of officers and exacerbating the personnel issues. The spike, which accounted for nearly two per cent of the eventual 3.91 per cent levy increase for 2020, was tough for council and the public to swallow, but at the end of the day, there wasn’t a lot that could be done except register the protest. Many people though did welcome the increased budget, and that’s because of another growing issue…

Mayor Cam Guthrie said at a meeting of his Task Force on Homelessness and Community Safety that he had heard the urgency on homelessness, and it seems that many in the Guelph were hearing the urgency too. Of course, there’s a difference in hearing the urgency and doing something about it. Councillor Rodrigo Goller tried to get the City to take a look at building supportive housing at 106 Beaumont, but the explosion of anger from area residents quickly scuttled the mere idea it. Not that the City would have been able to do much because technically social housing is run through the County of Wellington, and the City doesn’t have that expertise. More people were now taking part in the advocacy for the homeless, but getting more homes for people in need is continually a case of easier said than done.

Before the new year, the Government of Ontario announced Bill 66, which included a provision that would allow development proposals to override typical planning processes at the municipal level that cities would be unable to appeal even at the Local Planning Appeal Tribunal (LPAT). The outrage was such that the government had no choice but to pull the controversial provisions, but the provincial Tories had another whammy up their sleeve in the form of Bill 108. With this one, municipalities were told that they could no longer collect Development Charges (DCs) beyond those that cover the construction of “essential” infrastructure like roads, water pipes and street lights, and the so-called “soft” DCs, like those collected for parks, libraries, and other community centres, would now be funded through a new tool called the “Community Benefit Charge.” The what, why and how of the application of the CBCs are still up in the air, and that’s just one of the unanswered questions the provincial government dumped on Ontario’s 444 municipalities this year.

2019 will probably be remembered as the year that Climate Change finally galvanized the world to action. The “Person of the Year” worthy work of Swedish teen Greta Thunberg lead to a series of global strikes and marches that saw millions take to the streets to demand climate action. Climate Change was a major issue in the Federal Election, perhaps for the first time, and it had an effect on the votes of millions of Canadians (see above). And while some provinces fought the carbon tax in court, only to see those same courts refute their arguments and force a final challenge at the Supreme Court, municipalities across Canada started declaring climate emergencies.

Guelph wasn’t one of them though.

After a tough debate in the spring, city council opted to stay the course on getting to net zero and 100 per cent renewable by 2050 while not declaring an emergency. It was the second blow for local environmental activists after the University of Guelph voted against divesting from fossil fuels despite a huge campus push in January. But in Guelph, there was still some good news on the environment. One long simmering environmental matter was resolved as the City of Guelph announced a deal to shut down the Dolime Quarry, and thus secured the safety of Guelph’s drinking water for the long-term. Then, in November, the Upper Grand District School Board declared a climate emergency and formed its own committee to look at ways for the board to reduce its carbon footprint. On the environment, there will definitely be more to come in 2020…