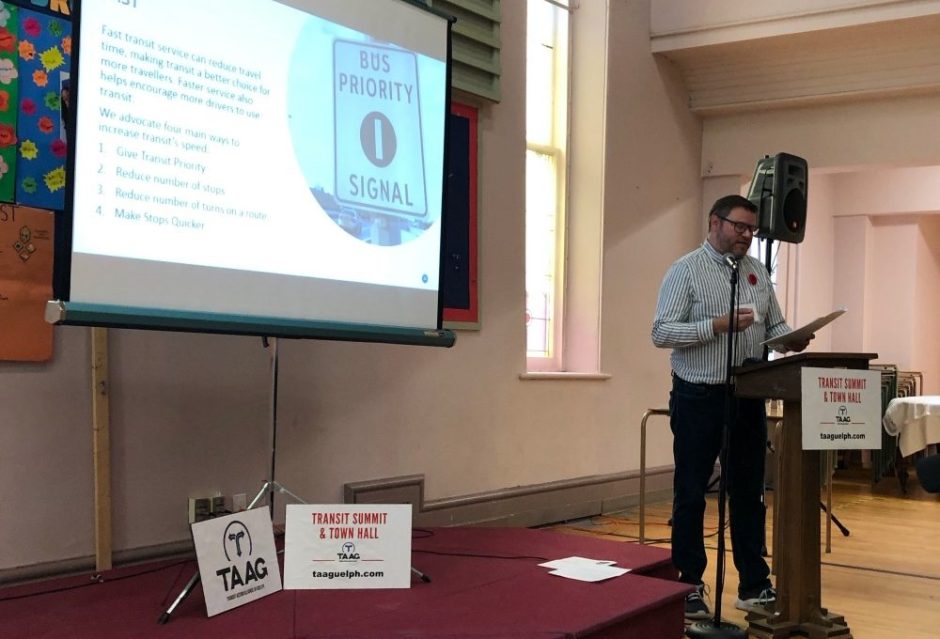 Merry Christmas! (Though this is far from a holiday-themed podcast.) Yes, it’s a transit themed podcast this Christmas week as we go backward to the Transit Summit and Town Hall hosted by the Transit Action Alliance of Guelph (TAAG) that happened in November to hear from the three out-of-town guests who took part in the festivities.

First, there’s Vincent Puhakka of the advocacy group TTCRiders. Puhakka has written for the Toronto Star, Torontoist, and Spacing Magazine; and promoted transit action on Newstalk 1010 radio and CBC Metro Morning. At the Transit Summit, Puhakka talked about some of the ways his group has been successful in promoting action on transit in Toronto, and how people can follow in their example.

After that it’s Sean Marshall, who is a Toronto-based geographer and writer with an interest in public transportation, pedestrian safety, and local politics. Marshall actually appeared on the Guelph Politicast in advance of the Transit Summit, and he talks here again about the long-term challenges of transit development, how preconceived notions stifle innovation, how different transit options have had difficulty getting off the ground, and how we can all help them grow and expand.

And finally, we’ll hear from Terry Johnson, who has been actively involved in campaigning for better bus and train services across Southwestern Ontario since 2011. He’s served on the board of Transport Action Ontario for two years, and was elected national president of Transport Action Canada in May 2019. Johnson talked about Transport Action’s efforts to raise awareness about the tremendous holes in transit service in Southwestern Ontario, including a report they wrote a couple of years trying to get more attention to the problem.

These three speakers layout an interesting case about getting to work on all that needs to be done to deal with the lack of transit options across the province. The challenges are certainly great, but at the same time they made the case that there’s a lot of different things people can do as advocates and users to encourage the creation of more transit options here, and around Ontario.

So let’s talk about getting better transit options for Christmas on this holiday edition of the Guelph Politicast!

If you want to hear more from TAAG, you only have to wait until next week’s edition of the Guelph Politicast for a quarterly discussion on transit issues with TAAG, and our recurring segment, The Transit Pass.