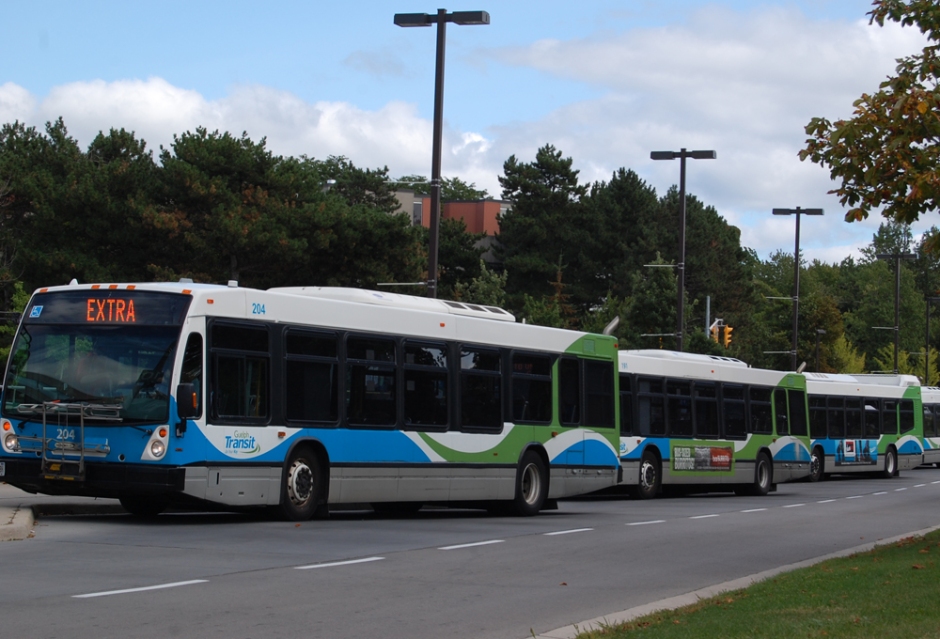 In a closed session at Wednesday’s council meeting on the COVID-19 response, council will hear information about the University of Guelph universal student bus pass, and the options they’ll need to consider if students don’t return to school for in-person classes in the fall. Less than eight weeks before the start of the school year, there are still a lot of unknowns about this important source of funding for Guelph’s transit system, and what happens if the City can’t collect.

To put into context the impact of the funding coming from the universal bus pass (UPass), the City of Guelph budgeted for $13.5 million in expected revenue for 2020. According to Colleen Clack, the deputy CAO for public services who oversees transit operations, the UPass accounts for $3.5 million per semester in the fall and winter in terms of revenue.

In other words, over half of City’s transit revenue, $7 million, comes from the sale of the UPass to U of G’s graduate and undergraduate students in the fall and winter semesters. “Our biggest revenue loss across the Corporation for this pandemic has been transit,” Clack told Guelph Politico. “Like municipalities across the country, our transit is at the top of the list when we talk about COVID impacts because we have needed to keep transit systems running but the revenue has dropped.”

The City’s response to such a precipitous loss of revenue for transit is complicated. U of G students pay for the UPass though their tuition and student fees, which are then allocated to the Central Student Association who administers the program. The CSA, and its graduate class equivalent the Graduate Students Association, negotiate the cost of the UPass and sign a contract with the City, which is ratified through referendum by the students themselves.

When the contract was last renegotiated in 2016, U of G’s students agreed to a $50 increase for the UPass over 15 semesters. The cost of the UPass for the 2020 winter semester was $145, and the cost for this coming fall semester is scheduled to be raised to $150. As of right now, the CSA is unsure if it will be even collecting the fall portion of the UPass fees, and there-in lies the rub because there’s no proviso in the contract for the CSA to not pay, and for the City to not collect.

“That is possible, and we would be contractually obliged to pay,” said CSA President Tyler Porier. “We’re taking care to make sure that whatever we bring to the table is fair, and that we’re maintaining the relationship we have. The City is acting in good faith, and that’s because they value students, and they value what we bring to the City of Guelph.”

Clack agrees that no one wants a fight between the City and the CSA over funds that they don’t have.

“We have a great relationship with the university, as well as with the GSA and the CSA, and we want a long-term relationship with them beyond COVID,” Clack added. “We all understand that the goal is to get through this and get back to whatever normal looks like and that this is about the longer term game, even though there’s some obvious short-term implications for the City.”

Short-term implication have already been felt. All parties agreed to a partial refund of the winter semester’s UPass when the U of G cancelled in-person classes for the rest of the school year. All students got $55.12 returned to them in the form of a credit that will be put towards their bill for Fall 2020. Clack said that the refund cost the City around $1.2 million in lost revenue.

Although the revenue in the summer semester is not as great as other times of the year, the CSA and GSA did not collect fees for the UPass from summer students considering that transit was operating free of charge in May and June. A new post-secondary pass administered by the City itself was introduced when fares were re-instated earlier this month.

“We’re hoping to mitigate some of our revenue loss for July and August by offering a monthly pass for post-secondary students that they can buy directly without going through the students associations,” Clack explained. “It’s only been one week, but we certainly know that there was demand, and we made it available at the same price as the UPass.”

For the president of the CSA there are still far too many variables to say with certainty what’s going to happen, but Porier thinks it’s doubtful that demand for the UPass will return in the fall. “There’s going to be very few undergraduate courses that will be offered in person, so the majority of students will still be learning online,” he said.

“We recognize that we need to be flexible, and whatever is proposed for the fall we will likely have a similar proposal for the winter,” Porier added. “I know a lot of students find it difficult because information can be slow to come out. […] I’m looking forward to getting some solid answers for students soon.”

One thought on “Lack of Students Will Seriously Impact Transit Funding, and Service”