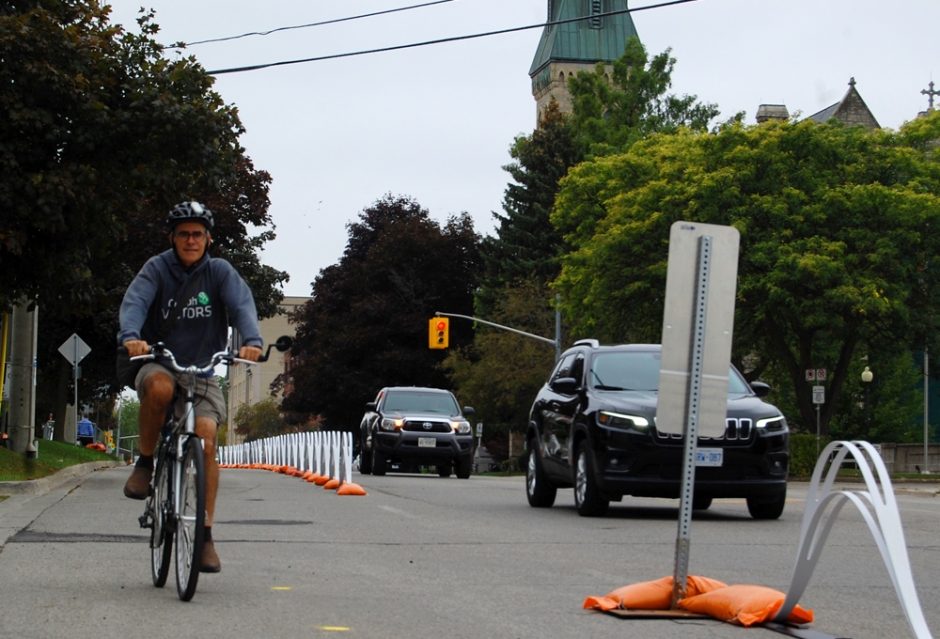 If you’ve noticed the metal waves along the side of the road on Woolwich Street, then you may have already been a part of the City’s grand experiment in complete roads. For the next week, Woolwich Street will be an example of a “complete street,” what the City’s planners are calling a safe, accessible and sustainable road design that could literally pave the way to the future.

“Complete street means that you have dedicated space for all road users, so it’s reallocating the existing right of way in different ways,” said Jennifer Juste, Program Manager for Sustainable Transportation at the City of Guelph.

“We don’t have bike lanes currently on this section of Woolwich Street, so that’s why we’re doing a protected to a bike lane,” Juste explained. “Other complete streets might introduce more elements to enhance the pedestrian experience, prioritize transit better, or just balance the needs of all road users a little bit more equitably.”

The experiment, or pop-up as Juste calls it, involves cordoning off one lane of Woolwich between Eramosa and Wellington as a two-way bike lane for cyclists that’s completely separated from the other traffic. Why Woolwich Street?

“It doesn’t have as much on-street parking on the side of the road, so there is less disruption to the local businesses and residences,” Juste explained. “Also, it’s a great avenue here that is part of the centre of Jazz Fest, and Guelph Storm games and whatnot, so we’re also attracting people who come downtown for special events that might not otherwise be our regular downtown crowd.”

If it’s sounds like fun, not everyone thought so. At the City’s official launch of the event Friday at noon, at least one person expressed reservations to City staff. Juste noted though that sometimes accepting change takes time.

“We looked at the Community Plan that passed recently, and there is a vision for transportation where transit is a priority, where people can get around by bike and walk easier, and that it’s a more inclusive community,” Juste said. “In order to really achieve that, some of the types of these changes are what we need to be looking at, and we need to start exploring and seeing what that actually translates to on the ground.”

This won’t be the only pop-up planned for city streets. Juste says that the City of Guelph will be rolling out a bus-only lane along Gordon Street between the University of Guelph and Kortright Road the week after Thanksgiving. In the meantime, the City is still looking for feedback through the Have Your Say website.

“For us, the success of this event for the next week is to get a lot of people to come and check it out and provide feedback on our online survey, and tell us what they like, what they don’t like, how they experienced it, whether they felt safer, and whether this is something they want to see elsewhere in our community,” Juste said.