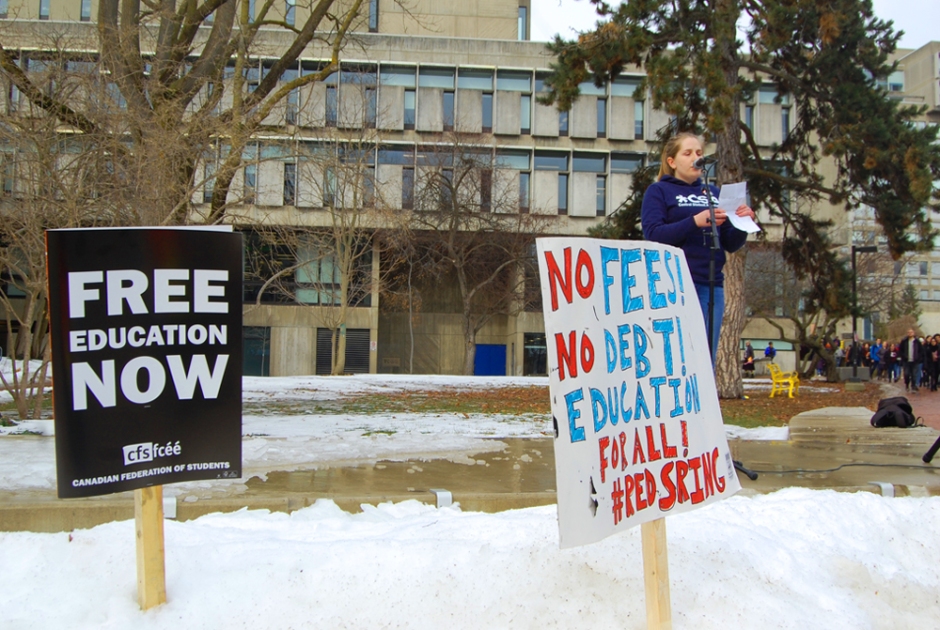 The weather Monday was unseasonably warm, but the rhetoric was red hot in Branion Plaza at the University of Guelph. Students leaders, politicians, and community organizers joined a province-wide coalition to reaffirm their anger in proposed changes to tuition and student fees from the provincial government.

As you may know, the Ford government announced changes last month that would cut tuition fees at Ontario’s colleges and universities by 10 per cent, while at the same time making it possible to students to opt out of additional fees collected for campus groups and services like student government, clubs, and media.

The government also proposed changes to the Ontario Student Assistance Plan, or OSAP. Grants once offered through the program will now be transformed back into loans, and the six-month grace period before repayment after graduation will also be cancelled.

Monday’s March for Students’ Rights was the latest in a series of demonstrations since the mid-January announcement of the changes. The activist group Students for Ontario co-ordinated province-wide protests, including a demonstration at Queen’s Park. The rally at the U of G today was co-sponsored by Gryphons for OSAP, a group that formed specifically to combat the proposed changes to post-secondary funding. 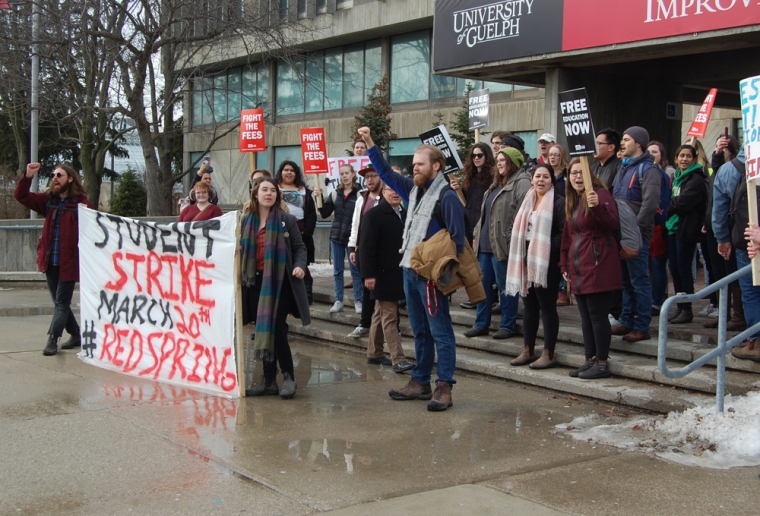 At Guelph, over 100 people gathered outside Zavitz Hall on campus to hear from speakers and rally support for student groups. One of the speakers was Guelph MPP Mike Schreiner, who, in the past, has found a lot of political support on campus for himself, and for the Green Party.

“It does feel personal, I have a daughter in university right now as well,” said Schreiner after the protest. “I’m going to continue supporting students, colleges, and universities to push back against this because it’s a real cut to quality education. It will effect everyone.”

But can all these protests make a difference? Schreiner is confident that it can, and the recent repeal of Schedule 10 of Bill 66 after widespread opposition shows that the government is susceptible to public pressure.

Keeping up the pressure is the plan of the day. It will be a topic at the annual general meeting of the Central Student Association when it takes place on Wednesday night, there will be a demonstration downtown on Thursday afternoon in front of Schreiner’s office on Woolwich, and a student strike is being planned for March 20.

Back on campus for the first time in 2.3 years. Found a nice spot for a snap between massive construction projects.
Meanwhile in #Guelph today, Labour Minister @montemcnaughton stopped by the campaign HQ of Peter McSherry to say that Guelph needs a PC MP in the next Ford government. Coverage coming to Politico soon. #onelxn2022
Happening now: A town hall on sustainability issues at @10carden with some of the #onelxn candidates in Guelph. Follow me on Twitter with live updates (same address).
Just finished happening: The celebration of @hopehouseguelph’s completion of the capital campaign and the announcement of the name for their newly bought and refurbished building.
Happening now: Supporters of a Guelph couple sued in a SLAPP suit by Guelph Medical Imaging for an exchange on Twitter are marching around Downtown.
Happening just now: @helenajaczek and @lloydlongfield announced $2.5 million in Federal funding for local parks and tourism improvement, including $750k for Riverside Park.