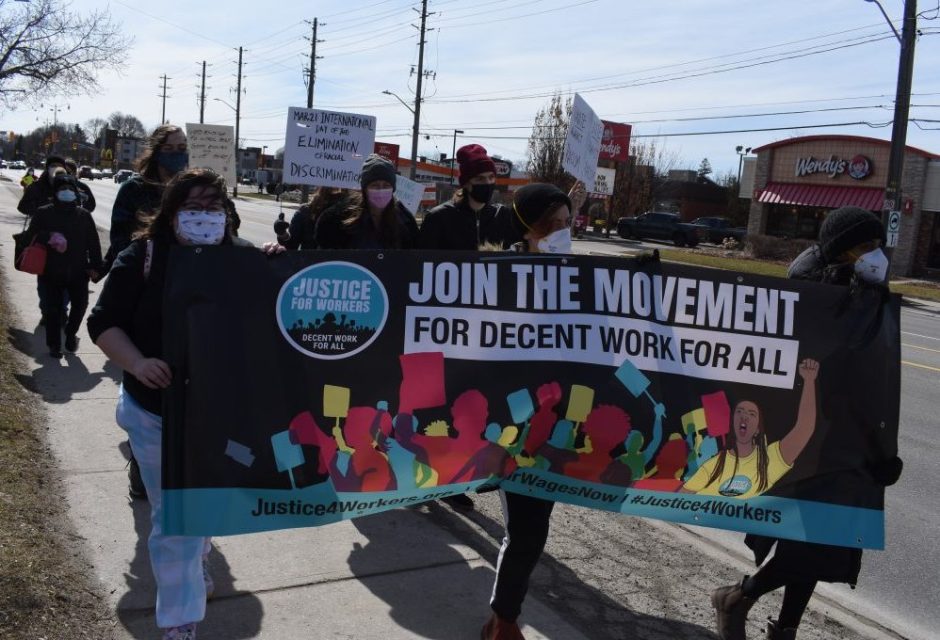 Sunday was the first day of spring in the northern hemisphere, but the season was barely a couple of hours old when Guelph’s political activists came out in force on Sunday afternoon. From anti-abortion activists in front of the Basilica of Our Lady, an anti-COVID mandates demonstration in front of city hall, to a march for migrant rights around the office of MP Lloyd Longfield, things here very politically busy downtown.

The first protest of the day was in front of the Basilica of Our Lady, this year’s 40 Days for Life, an annual demonstration to end abortion that takes place over the 40 days of Lent. Numerous anti-abortion groups around the world take part in this campaign, including Campaign Life Coalition and Guelph & Area Right to Life, so the site of anti-abortion protestors around town at this time of year is not a new phenomenon.

Why the Basilica? It’s proximity to Garden of Grace, a memorial garden opened in 2017 that was meant for people that wanted to mourn the loss of an unborn child be it through abortion or miscarriage. They said that they had permission from the Basilica to hold the demonstration, which got a few honks of support, but it also got a lot of other attention too.

Let’s just say that it did not go unnoticed that five young men stood on the steps along Norfolk as the main focus of the protest. At least a couple of times, women stopped in cars at the light, and leaned out of their car window to yell at the men about their first hand experiences with pregnancy, or having a vagina for that matter.

There were women there too. While two older woman stood above on the mezzanine holding their signs, another woman was cleaning up  around the stairs picking up trash.

“Do you have an opinion on slavery?” the woman picking up trash asked. I said that I did, and that I was against it. “Did you have to be a slave to have come up with that opinion?” she added.”On these social issues guys can have an opinion too. Half the children in the womb are men, so sure you do have a voice.”

Around the corner and down the road, others were using their voice and it was to protest something just as controversial as the end of abortion access.

For the first time in over a month, an anti-COVID restriction protest was organized in front of city hall on Carden Street. Over 100 people showed up, which is significantly less that the 300-plus who took part in a march back in January, but is about the usual number of people expected at these protests locally.

You may be wondering why people were gathered to protest mandates that have either been repealed, or are in the process of being repealed. Most notably, this protest was taking place less than 12 hours before the end of mask mandates in Ontario. So why the outrage?

“People are beginning to realize that our country has been offered up on a platter for the global corporate elite. These powers have corrupted our media and our political class to the core. These are crucial pillars that our society is founded upon,” said Curtis Maranda. who is a frequent speaker at these gatherings. “How much more fear and division can our society handle?

The first of three speakers was Peter van Oordt, formally a member of the volunteer fire department in Puslinch who asked to leave the service after he posted a 13-minute YouTube video last October. Filmed in the fire house while wearing his firefighters’ uniform, van Oordt questioned the authority of the Township to ask for his vaccine status, and called it a violation of his human rights. He’s since been profiled on Rebel Media, and his YouTube post was shared on conspiracy groups the the “Great Awakening” subreddit.

“I thought about coming here today to tell you a little bit about how I got fired from my job as a part-time firefighter. I thought I could tell you about our trips to Ottawa and tell you about the counter-protester who stole my daughter’s flag and dragged it through the mud. But instead, I thought I would ask you some questions,” van Oordt said has he began his speech.

To put it simply, the answers to his questions was “Freedom!” He ran through the usual list of grievances about the media, and how government should respect choice. He cited example by saying that some people like country music and some people like the blues, and that’s okay. He then unsubtly compared the struggles of people who refuse to wear a mask or get vaccinated with Holocaust survivor and Man’s Search for Meaning author Viktor Frankl.

“In it, he talks about how, at its core, there is something inside each of us that no matter what we desire, freedom,” van Oordt explained. “They could take away all kinds of things from Franco, but they could not take away his freedom to choose how he was going to respond to that moment. They could knock down the fires of freedom, they could get it down to the tiniest little flame, but they could not completely extinguish that desire for freedom. A desire for freedom goes to the very core of what it is to be human.”

One of the people cheering the crowd was a man in an InfoWars hoodie, and, if you looked closely, you would have noticed a yellow button with the Star of David on his sleeve.

After van Oordt, University of Waterloo biochemstry prof Dr. Michael Palmer took to the stage. Palmer said that this would be his last lecture as a professor because he was meeting with his dean on Monday and his head was “on the chopping block,” he said. The self-proclaimed conspiracy theorist who once told students that COVID is fake, warned the crowd not to be fooled by the end of mandates.

“It’s not about anybody’s health, it’s just simply about a purge. That is what’s going on, it’s a purge,” Palmer said. “My wife says I’m lucky to be in the first round of the purge because the next rounds might be worse. I hope it won’t come to that.”

After talking quickly about why all the science is wrong about the safety and efficacy of COVID-19 vaccines, Palmer talked about how there are signs that the truth is “finally coming out,” and recent events like the Freedom Convoy in Ottawa show that people aren’t buying the proverbial party line anymore.

“I do think something is changing, something is opening up. The truth is finally coming out,” Palmer said. “We saw this with the Canadian truckers and their convoy inspiring not just the country, but the world. In the same token, any bit of truth that comes out anywhere, whether it’s presented in parliament or presented in a court of law, is a victory for all of us in the global community of human beings.”

The final speaker was from Police On Guard For Thee, a group that claims to be made up of active and retired police officers who believe that enforcing COVID-19 restrictions infringes on their oath to the job, and the freedoms outlined in the Charter. They had a table at the rally with buttons and a connect-the-dots activity sheet for kids. The solution was a police hat.

Down the road and across the tracks from the anti-mandate rally, members of Justice for Workers and United Against Racism were having a rally of their own. The marched from outside the Granary Building that houses the constituency office of MP Longfield, down to Gordon and around the block via Wellington to make their case: Migrant workers need more protection.

“If you are afraid that you will be deported, and if you can be deported for any reason, then you’re not going to speak up if your work is unsafe, even if you’re sick with COVID,” explained Susan Rosenthal, one of the march’s organizers.

“One of the reasons we couldn’t get the pandemic under control for so long was because so many people didn’t have sick days, they didn’t have any way of protecting themselves on the job because they were afraid to speak up because they don’t have rights. They could just be fired.”

Rosenthal said that the march was centred around Longfield’s office because of the Federal government’s role in overseeing immigration policy. She noted that Canada is going to need immigrants for the growing economy, and that raising the work standards for new Canadians and migrant labour will force a raise in standards for everyone else.

Organizers are planning another rally for May 1 in front of City Hall, which will also be the official launch of the Decent Work Campaign, an initiative to get provincial candidates to support actions like a $20 per hour minimum wage, 10 paid sick days, access to unions, and more protections for temp agency workers.

After the workers’ rights supporters wrapped up and went their separate ways, but the anti-mandate protestors were still marching. Heading down Gordon Street, taking up the entire southbound side of the road, they yelled and cheered and waved their Canadian flags while blasting George Michael’s “Freedom 90” in apparent ignorance of the song’s meaning beyond the title.