November is a busy month at council, and this third week of the month is going to be the busiest in terms of council business. Of course, the biggest meeting of the year is the budget presentation, but just in time for comment is a new plan from Guelph Transit to expand their service over the next decade, which yes, will require some major new investments. So what might transit look like in 10 years time?

NOTE #1: Delegates will be able to appear at this meeting via telephone or video, but you do have to register with the clerks office before 10 am on November 12. You can also submit written delegations and correspondences for agenda items.

Guelph Transit Action Plan: Route Review Recommended Plan – Are you ready for another transit route alignment?! This special meeting of council (which takes place just 15 hours before another, bigger special meeting of council), will layout the preferred plan for a decade-long expansion and enhancement of Guelph Transit service with streamlined routes, and more frequency built around central nodes.

Working off of feedback collected from the public earlier this year, the so-called “Future Ready Plan” could see 10 years of changes starting in 2022 upon council’s approval, although many of the more drastic changes would happen in the first seven years. The new system would more closely resemble a grid system, and it will offer expanded Sunday and holiday hours as an on-demand service option. This is the new transit map at the end of 10 years: 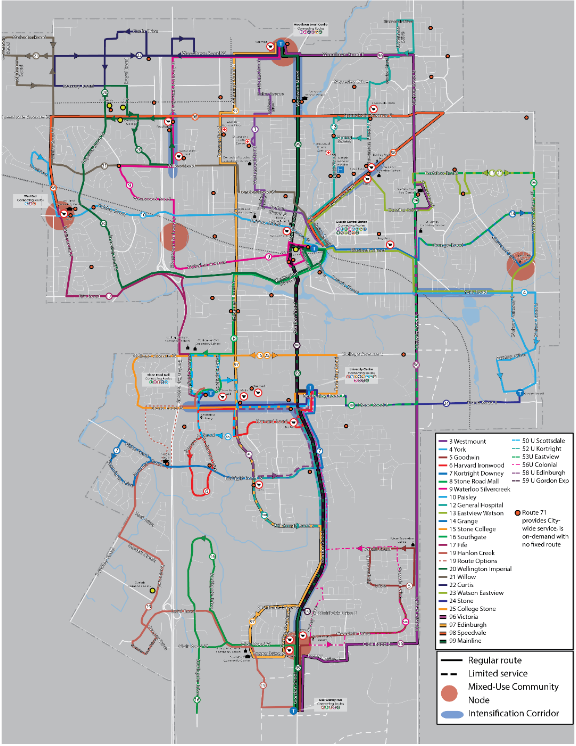 Naturally, these changes do not come without cost. For instance, the changes to the system in the first year will require the hiring of 12 new operators, two new buses, and will see 135,637 more kilometres covered, which will have an obvious impact on maintenance and fuel costs. In the second year, that’s 12 more operators and four more buses, which is why one of the recommendations is to refer the financial implications to the budget deliberations on December 2. Those costs are $1.77 million in 2022 and $1.26 million in 2023 respectively.

For that money, year one of the realignment will the #16 Southgate return to conventional service, changes to some of the university-centric routes, and an increase in frequency to the #99 Mainline route, which will gradually become the formal spine for the delivery of transit service in Guelph. In year two, transit users will start to see even bigger changes including more midday frequency for the #10 Imperial, #12 General Hospital, and #13 Victoria Road Rec Centre. The #8 Stone Road Mall bus will also get 20-minute weekday and Saturday service.

The year-by-year implementation of the realignment is in Appendix E of the Guelph Transit Action Plan starting on page 141.

The other staff recommendations to council are to pause the implementation of the agreed upon changes to the Revenue to Cost (R/C) ratio that were approved in 2019 until the Transit Fare Strategy is done, and to execute the Investing in Canada Infrastructure Program (ICIP): Public Transit Stream Transfer Payment Agreement (TPA) with the Ontario government. (In case you’ve forgotten, that’s the deal to receive funds from the upper levels of government to electrify the transit system.)

Happening now: @mayorcamguthrie and @gwwic are at City Hall raising the the flag for the International Day for the Elimination of Violence Against Women, which launches 16 days of action.
A tale of two protests in #downtownguelph today.
Happening soon: @wdgpublichealth is going to lay out the plan for getting kids aged 5-11 vaccinated. Announcement could come from Health Canada tomorrow.
I always thought that I would make the front page of the Globe before my sister, @charbonneaustephanie but then again my town didn’t blow up this past summer. 🤕 Check out the online version. https://www.theglobeandmail.com/canada/article-abandoned-gas-well-identified-near-ontario-explosion-that-has/
I’ve had a lot of different roles in my life, but one of my favourites is being Maybel’s uncle! She’s four years old today, and she’s already been through a lot in her young life: health issues, a global pandemic, and her home town almost blew up this summer. I love her so much, and I hope she had a great 4th birthday.
Getting ready to go live on @cfru93.3 for #elxn44 coverage. Tune in on CFRU 93.3 fm or CFRU.ca!!