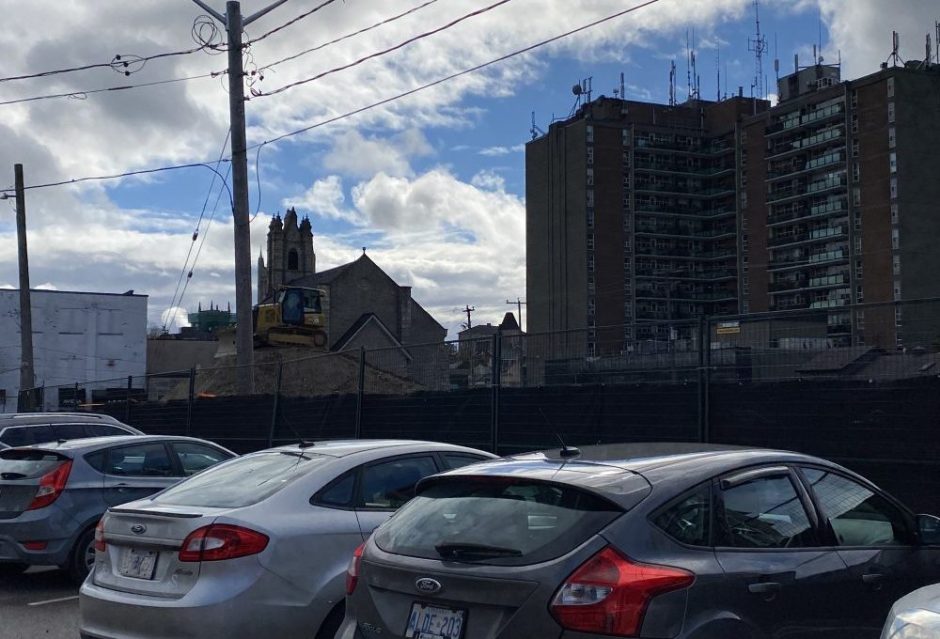 Excavation work continues in the old Baker Street parking lot, so naturally, the City of Guelph has announced that they’ve found more remains. It was a little over a week ago that the City first announced that the had found remains, not for the first time, and most definitely not for the last time. Now, we will get updates on the matter every two weeks.

“To date, eight (8) distinct discoveries of human remains (bone fragments) have been unearthed,” said a City of Guelph media release. “Further to this, 15 additional grave locations were identified that will be investigated to determine if human remains are still present or if the individuals were previously exhumed.”

Out of respect for the deceased, the City does not publish pictures of the remains found. If you go down to Baker Street now you will note that the western half of Baker Street lot, from Chapel Lane to the entrance behind Guelph Community Health, is protected by a tall fence and a black shroud.

Peering through the shroud on Tuesday, and you see a portion of the lot directly across from 40 Baker almost completely dug up. A six-foot deep hole has been dug, and calling it a hole is kind of underselling it because of its size, but in this hole there are little orange flags everywhere marking different places of interest with the highest concentration of flags closest to the sidewalk. In the hole, you can also see the remains to two old brick structures, and the stump of an old tree below the concrete.

The other thing you’ll note is that a relatively small section of the parking lot has been explored, which means that you will likely be hearing about new discoveries under the Baker Street lot for a while.

History of the Site (courtesy of the City of Guelph):

The triangular block that is the currently Baker Street parking lot was the site of an all-faith cemetery from 1827-1853. The Public Burying Ground was established by the Canada Company in 1827. The site was used as a cemetery for 26 years. In 1853 the Town of Guelph passed a new bylaw banning human burials within town limits. The property continued to be owned by the Canada Company for another 24 years, until it was purchased by the City for use as a public park in 1879. When plans were made to move the remains from the old Public Burying Ground to a new cemetery (Woodlawn Memorial Park), family members moved some burials but others, especially unmarked graves, remained.