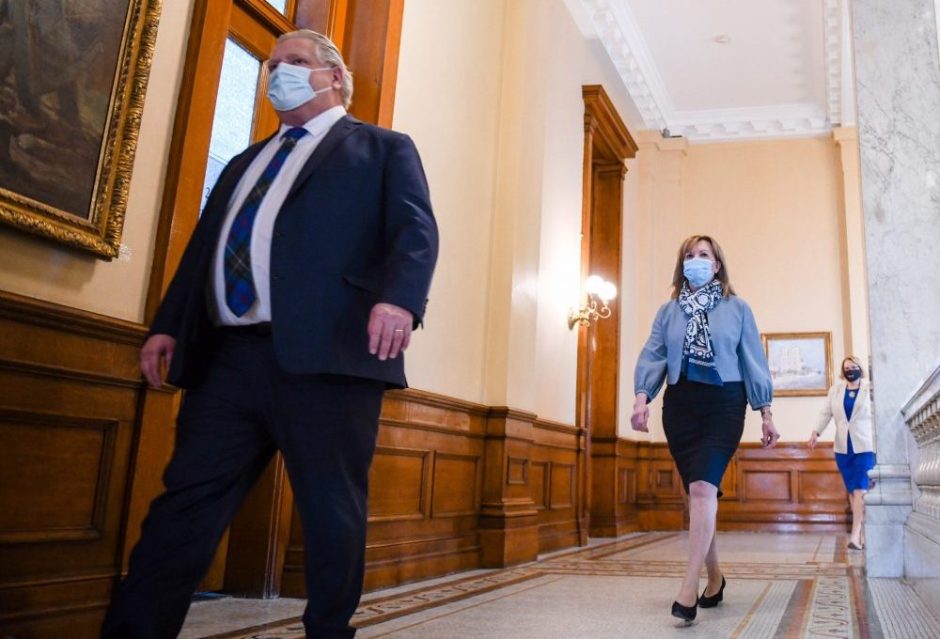 After a couple of weeks of pressure from restaurateurs and other business owners about the Government of Ontario’s seemingly random removal of capacity limits on cinemas and sports venues, it looks like all limits are coming to an end by the mid-point of next month. In a typical late Friday announcement, Premier Doug Ford said that more limits will be lifted on Monday with an eye to end all COVID-19 precautions by the end of March.

Starting on Monday October 25 at 12:01 am, the Ontario government will be lifting capacity limits in most areas that require showing proof of vaccination to enter. These include restaurants, bars and other food or drink establishments; indoor areas of sports and recreational facilities such as gyms and where personal physical fitness trainers provide instruction; casinos, bingo halls and other gaming establishments; and indoor meeting and event spaces.

On November 15, all remaining venues including night clubs, adult facilities, and wedding reception and event spaces will be allowed to lift their capacity limits too.

If all goes well, the Province intends to gradually lift capacity limits where vaccine certificates are not required starting around the middle of January, and they will also start to gradually lift requirements to show proof of vaccination at the same time with the intention to lift them completely, even in high-risk settings, by February 7.

“Thanks to our cautious and careful approach to re-opening, we are now in position to gradually lift all remaining public health measures over the coming months,” Ford said in a statement. “This plan is built for the long term. It will guide us safely through the winter and out of this pandemic, while avoiding lockdowns and ensuring we don’t lose the hard-fought gains we have made.”

By March 28, the Provincial government hops to lift all remaining restrictions including mask wearing. Essentially, to get back to normal, but not without keeping our eyes on the proverbial prize says Ontario’s Chief Medical Official of Health.

“The months ahead will require continued vigilance, as we don’t want to cause anymore unnecessary disruption to people’s everyday lives,” said Dr. Kieran Moore. “Ontario has the infrastructure in place to manage outbreaks, including a high-volume capacity for testing, and people to perform fast and effective case and contact management when needed.”

What was supposed to be a good news announcement though has gotten some pretty sharp criticism.

“The Ontario government is throwing caution to the wind and putting at risk the progress the province has made in keeping the spread of the COVID-19 virus in check,” read a statement from the Registered Nurses’ Association of Ontario (RNAO).

“Doug Ford is putting the cart before the horse with today’s announcement. Ford’s plans to lift public health restrictions when vaccine certificates have only just begun and millions of kids remain ineligible for vaccines is worrisome, especially as we head into the winter months,” said Guelph MPP Mike Schreiner in a statement. “And why are we talking about lifting public health measures when almost 2 million kids under 12 are still unvaccinated? Parents are waiting for guidance on how their kids will get vaccinated. But we haven’t heard anything from Ford.”

Speaking of not hearing anything from the Premier, Durham MPP Lindsey Park released a lengthy statement this afternoon recounting a series of snafus and miscommunications that led to some confusion around her vaccination status.

According to Park, she was going to get the vaccine but was advised by her doctor that she should seek a medical exemption due to a past bad reaction to a flu shot. She reported this in a letter to the Premier’s office in advance of the deadline to get vaccinated, but that message seemed to not be received even though Park said some staffers told her that they had. She believes she was then thrown to the proverbial wolves when the press found out.

Park is now the second Progressive Conservative candidate to leave the caucus over vaccine mandates. Chatham-Kent-Leamington Rick Nicholls refused to follow the Premier’s mandate for all government members to get vaccinated last month.