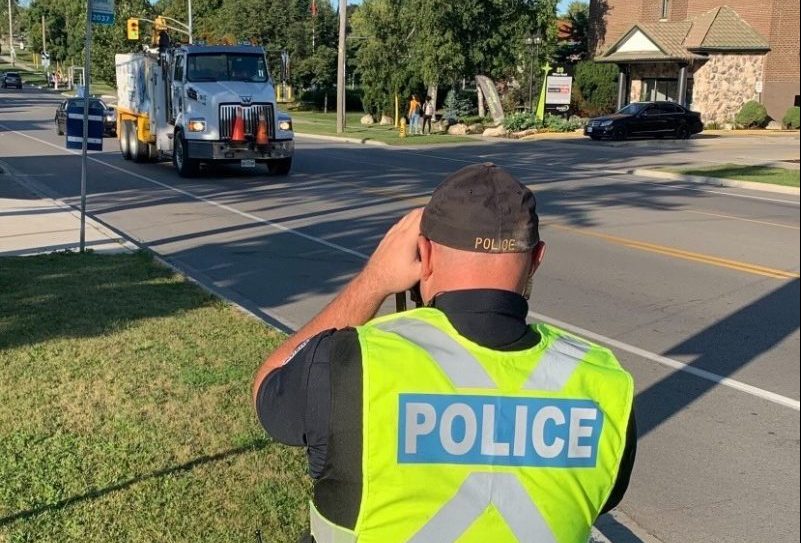 Shots Fired at the Manor

Police were called to the parking lot outside the Manor adult entertainment club last Saturday at 2:20 am after reports were received about a disturbance, there was a physical confrontation during which one man brandished a firearm and pistol-whipped another, and at some point the gun went off though no one was reportedly shot. Two men from Guelph and one woman from Ottawa were charged with a total of 32 different counts including several firearms related charges.

Guelph Police further reported that there was a similar firearms incident at the Manor on October 2, a man was shot in the same parking lot just before 2 am after getting into a fight with two other men. The victim is presently in the hospital recovering from his wounds, but the police are asking for help solving that case. If you have any information about what happened on October 2, you’re asked to call Sergeant Chris Probst of the Service General Investigations and Special Projects Unit at 519-824-1212, ext. 7342, or email him at cprobst [at] guelphpolice.ca. You can also leave an anonymous message for Crime Stoppers at 1-800-222-8477 (TIPS).

At around 2:30 am on Friday, Guelph Police were called to a business at Willow and Dawson after someone saw a man dragging another man out of the business before he was able to break free and escape. The suspect was wearing a clown mask and carrying a machete, and when the officers arrived, he tried to escape on a bike. Apparently, he tried to toss away a 30-inch machete according to a witness at the scene.

When the 36-year-old was taken into custody, a police search yielded a large chunk of suspected pink fentanyl with a value of approximately $450, two cell phones, a digital scale, small plastic baggies and $200 cash, as well as a debit card and driver’s licence that had been reported stolen from a vehicle earlier. He was charged with possession of a weapon for a dangerous purpose, possessing controlled substances for the purpose of trafficking, possessing identity documents and possessing property obtained by crime, and was held for a bail hearing later on Friday.

On Sunday October 17 at 9:45 pm, a 26-year-old Guelph man was charged with assault and two counts of breaching probation after getting belligerent with staff at a medical facility and punching a security guard in the face.

A 42-year-old man is facing a number of charges, including two counts of assault police, after Guelph Police were called to a disturbance downtown on Saturday morning. The man was arrested after he assaulted a woman and smashed her cell phone, he then spat in the face of one office at the scene, and he kneed a second office in the face while at Guelph General Hospital for medical treatment.

A 25-year-old Guelph woman was charged with assault causing bodily harm, possessing a weapon for a dangerous purpose and failing to comply with a bail order in relation to a September 10 incident where a victim was struck three times in the back of the head with a piece of wood in an altercation in the early morning at a downtown apartment building.

A 27-year-old Guelph man is charged with possessing a weapon for a dangerous purpose, break and enter and mischief after getting into a dispute with a neighbour. Guelph Police were called on October 13 when one resident came on to the property of his neighbour with a 10-centimetre knife, and then later threw furniture and food scarps over the fence into his neighbour’s property.

A 31-year-old Guelph woman turned herself into police after pepper spraying two men, one of whom was known to her, outside an apartment building at Woolwich and Speedvale last Sunday. The one victim who got the full blast of the spray refused to provide a statement or seek medical treatment.

A Guelph man died Thursday evening after being struck by a vehicle while attempting to cross Edinburgh Road South near Carrington Place. The driver of the vehicle, a 40-year-old Guelph woman, remained at the scene and co-operated with police officials investigating. The Traffic and Forensic Identification units are gathering evidence, and are interested in talking to witnesses. If you were a witness, get in touch with Constable Scott Riche of the Traffic Unit at 519-824-1212, ext. 7478, or email sriche [at] guelphpolice.ca.

While running a road safety initiative towards reckless driving habits around local elementary schools, the Police Traffic and Uniform divisions handed out 15 tickets, including 12 for speeding in excess of 20 km/hr over the posted 40 km/hr zone, and one ticket for operating a motor vehicle with an unrestrained child passenger.

A Guelph woman took minor injuries after her car collided with a school bus on Tuesday at the Kortright Road West and Ironwood Road. The driver of the car was charged under the Highway Traffic Act with making an unsafe turn, and was taken to Guelph General Hospital with minor injuries.

A 25-year-old St. Catharines man was charged for impaired driving after the staff at a fast food drive thru reported that he was showing signs of intoxication when he stopped by on Sunday morning around 4:40 am.

A 19-year-old man from Wellesley was charged with stunt driving so his driver’s licence was automatically suspended for 30 days and his vehicle impounded for 14 days. On Monday October 18 he was observed doing  104 km/h in a posted 50 km/h zone in a Chevrolet pickup.

On Wednesday around 11 pm, a 31-year-old Guelph woman was charged with stunt driving and failing to provide a driver’s licence. She was caught doing 129 km/h in a posted 60 km/h zone in the area of Speedvale Avenue West and Elmira Road North.

A 26-year-old Ariss man was caught 120 km/h in a posted 60 km/h zone along Woodlawn Road West near Governors Road at 1 pm on Saturday. His licence was suspended 30 days and he was charged with racing a motor vehicle.

On Friday, a 26-year-old Guelph woman was also charged with racing a motor vehicle on Friday October 15 at 1:15 pm for doing 93 km/h in a posted 50 km/h zone on Edinburgh Road South near Dean Avenue.

There six motor vehicle collisions reported on Wednesday alone, including one collision with a deer in the area of Downey Road and Laird Road.

Several laptops were stolen from a downtown business on Wednesday in the area of Norfolk Street and Quebec Street after someone smashed in a large window with rocks to gain access. The theft was reported by a passerby at 5:20 am.

Police found a man passed out inside a car parked in a Waterloo Avenue parking lot. While the man was taken to the hospital to be assessed, it was discovered the car itself had been stolen, and the man himself was under an undertaking, which required him to be home between 9 pm and 6 am. He was charged with possessing stolen property over $5,000 and two counts of failing to comply with an undertaking.

A 59-year-old Guelph female was charged with break and enter after breaking into an unoccupied residence downtown owned by a local social service agency twice in one day.

A 43-year-old Grey County man was charged with failing to appear, which is a charge he’s faced before because in July this year he was arrested for missing a February court date, and then skipped out on the July 20 hearing after being released on bail. The original charges date back to March 2020, when the man was charged with assault, assault to resist arrest and mischief following a disturbance in Guelph. He appeared in court on Tuesday after he was arrested by another police service.

A 20-year-old Guelph man is charged with three counts of breaching a judicial release order and one count of breaching a police undertaking after being caught near his mother’s home near Victoria Road North and Hadati Road. The man had been given several orders to not communicate with his mother, or be within 100 metres of her home, and was found standing in the driveway of a neighbour.

A 32-year-old Guelph was arrested five years after her DNA was found in a stolen SUV in December 2016. Police picked her up during an unrelated matter in the area around the corner of Stone Road West and Edinburgh Road South.

Last Saturday, several residences in a downtown neighbourhood around Boult Avenue reported that their Halloween decorations were damaged or destroyed. That same night, people in the area of York Road and Audrey Avenue reported seeing a man smashing decorations with a piece of wood. If you have any information call Constable Brad Townsend at 519-824-1212, ext. 7123, or email him at btownsend [at] guelphpolice.ca.

Happening now: @mayorcamguthrie and @gwwic are at City Hall raising the the flag for the International Day for the Elimination of Violence Against Women, which launches 16 days of action.
A tale of two protests in #downtownguelph today.
Happening soon: @wdgpublichealth is going to lay out the plan for getting kids aged 5-11 vaccinated. Announcement could come from Health Canada tomorrow.
I always thought that I would make the front page of the Globe before my sister, @charbonneaustephanie but then again my town didn’t blow up this past summer. 🤕 Check out the online version. https://www.theglobeandmail.com/canada/article-abandoned-gas-well-identified-near-ontario-explosion-that-has/
I’ve had a lot of different roles in my life, but one of my favourites is being Maybel’s uncle! She’s four years old today, and she’s already been through a lot in her young life: health issues, a global pandemic, and her home town almost blew up this summer. I love her so much, and I hope she had a great 4th birthday.
Getting ready to go live on @cfru93.3 for #elxn44 coverage. Tune in on CFRU 93.3 fm or CFRU.ca!!