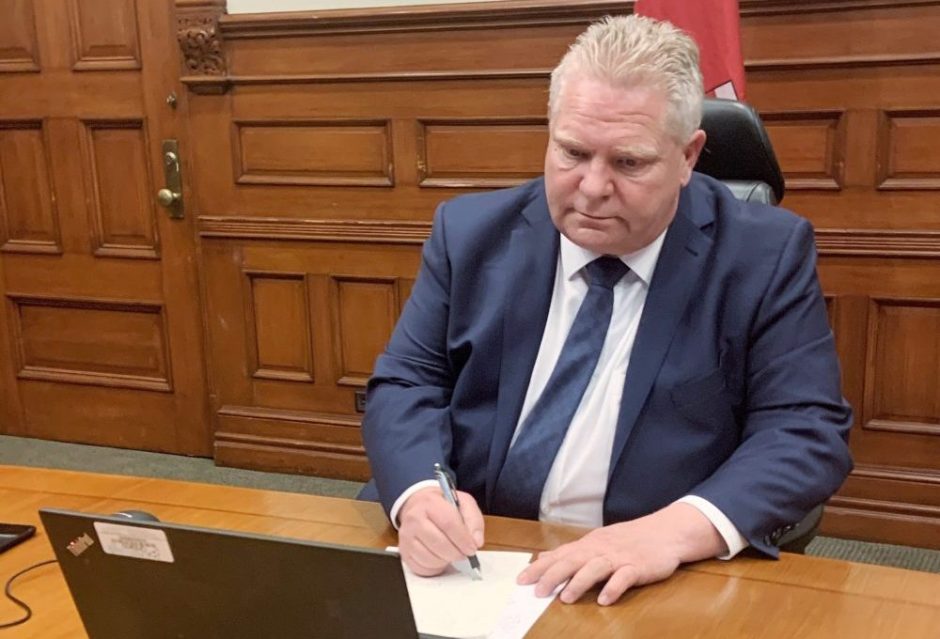 Nearly a week after the last time he was in front of cameras, Premier Doug Ford came out of quarantine for a minute on Thursday morning to say he was wrong. Apologizing for the overreach of the COVID restrictions he announced last Friday, Ford appeared emotional as he talked about what he did wrong, why he wants a second chance, and why now is finally the time to get serious about paid sick days.

Ford also addressed his own recent exposure to COVID-19, and discussed how that’s played a role in turning him around on paid sick days.

“I assure you it’s not lost on me that unlike many people, I’m able to isolate and continue working, and for too many people right now that’s not the case,” Ford said. “During these unprecedented times, regardless of where you work or what you do, if you’re forced to go into isolation or quarantine, your job should be safe.”

The Premier explained that it was his hope that the Federal Budget presented Monday would address issues with the Canada Recovery Sickness Benefit, which has only ever offered limited coverage for people unable to work due to illness, and is nowhere close to offering the same impact as paid sick days. Earlier this month, Ford railed at opposition politicians and activists for ignoring the benefits of the CRSB.

“So far 300,000 Ontarians have accessed the program, so to all the opposition members and everyone that’s preaching about the sick days and playing politics rather than do that, why don’t you try to help someone by telling them where they can go,” Ford said at an April 7 press conference.

Three weeks later: “For months, my ministers and I have been trying to work with the Federal government to fix the existing federal sick pay program,” Ford explained. “That’s why we’re now working on our own solution to fill those gaps for everyone in Ontario, because I want workers to know, as I have right from the beginning, that I will always have your back.”

The exact details of the provincial plan were not available, which was confirmed later in the Zoom when Ford was pressed by the media. All he could offer were vague, almost Trumpian platitudes.

“We’re working on that right now, and we’ll be rolling that out, but what I can tell you is that it’s going to be one of the best, in conjunction with the Federal government, in the entire North America,” Ford said. “I also want to remind the people of Ontario that there’s no other province in this entire country that’s going to have the the program that we’re going to be laying out. Nowhere close.”

Opposition leaders were, at least, unconvinced of the Premier’s change of heart.

“On Friday, Doug Ford set people up to be ravaged by the third wave. Today, he didn’t give them anything to save them. We cannot take any more of the delays, half-measures and disastrous decisions that cost lives,” said official opposition leader Andrea Horwath in a statement. “Every day he delays action, more lives will be lost, and more families and businesses will be devastated.”

“It’s taken the Premier a year into the pandemic, after being forced into isolation because of a workplace exposure, to finally realize the privilege he has over workers living paycheque-to-paycheque,” said Guelph MPP Mike Schreiner in a statement. “Ford needs to stop playing politics by blaming the federal government and the CRSB. Workers have needed paid sick days since last year. It is irresponsible for the Premier to ignore the science and to have waited this long to act.”

“Doug Ford knows he’s spiralling and that Ontario voters have lost confidence in his ability to manage this emergency. But ‘Sorry, folks’ won’t cut it,” added Steven Del Duca, who has loudly called on Ford to resign all week. “A true leader would have already ensured essential workers were protected and essential workplace outbreaks were being stopped in their tracks. His cold-hearted refusal to introduce sick days for more than a year cost lives.”