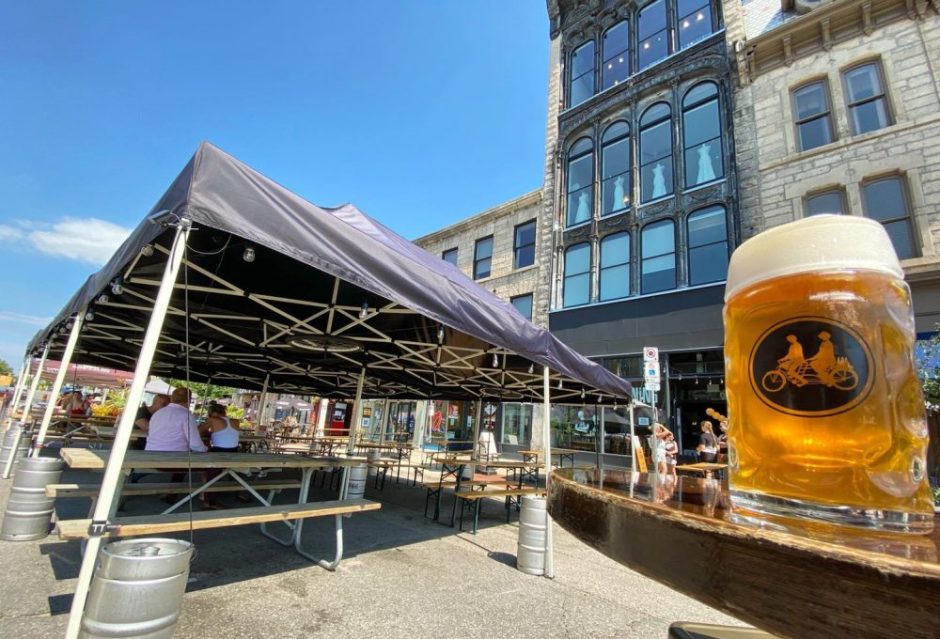 Mayor Cam Guthrie called an emergency meeting of city council for Monday at 6 pm to discuss extending the end date for the Downtown Dining District. The district is currently schedule to close on Monday, but an open letter from the people running expanded patio service there threatened immediate job losses if they’re not allowed to continue for a few more weeks.

At the June council meeting to discuss the City’s response to COVID-19, staff was delegated the authority to approve the shutdown of City property – including parking spots, sidewalks, and streets – to allow for the expansion of patio space for area eateries and bars. The Dining District at the intersection of Wyndham and Macdonell first appeared on the weekend after Canada Day, and its success prompted the extension of the program through to Labour Day weekend.

Earlier this month, the City declared that the Dining District would be allowed to exist until September 21 before it was to be dismantled, but there’s been a recurring rumbling the last week that the City should allow the Dining District to exist as long as its possible to enjoy the outdoors, and even longer than that.

Patio season in the capital will continue until the end of 2020. 🍺🍷☕️ #Ottawa #JUMPNextAtNight – @MrDRadio https://t.co/WMhYnfsfPW

Downtown Guelph bar and restaurant owners are not pushing for winter hours (yet), but there is a Change.org petition started by the proprietors of Brothers Brewing asking for an extension of the Dining District until October 31.

Our Energy Guelph also posted an open letter earlier this week asking for city council to explore the possibility of making the Dining District a permanent fixture as a first step to making a car free downtown.

But the main motivator though seems to be an open letter that was posted to the Facebook group “Guelph This and That” by one of the owners of Frank and Stein’s, who said that businesses will be forced to lay off as many as 100 people on Monday with the reduced capacity, and the reduced business that will result from the closure of the Dining District.

“We are truly disappointed that while other Municipalities across the province are moving to extend their outdoor dining districts for safety and economic benefits, Guelph is choosing another direction,” wrote Chuck Nash. “Financial losses will start as soon as Monday September 21st , as the average capacity is set to be reduced by 68 per cent from where it currently sits. This will be detrimental to business as a large percentage of people are only comfortable dining outside.”

The City of Guelph has not released a formal rationale or reasoning for not extending the Dining District past September 21, but Nash’s letter seems to indicate that City staff is concerned about the increasing number of COVID-19 cases in Ontario and the greater Guelph community.

Extending the Dining District is at least theoretically possible. The original motion passed by council in June allowed that certain bylaws and regulation be waived until October 31 so that creation of new patio spaces like the Dining District could proceed.

No formal council agenda has been released yet for the meeting, but the Procedural Bylaw allows for a meeting of council to be called with 72 hours notice.