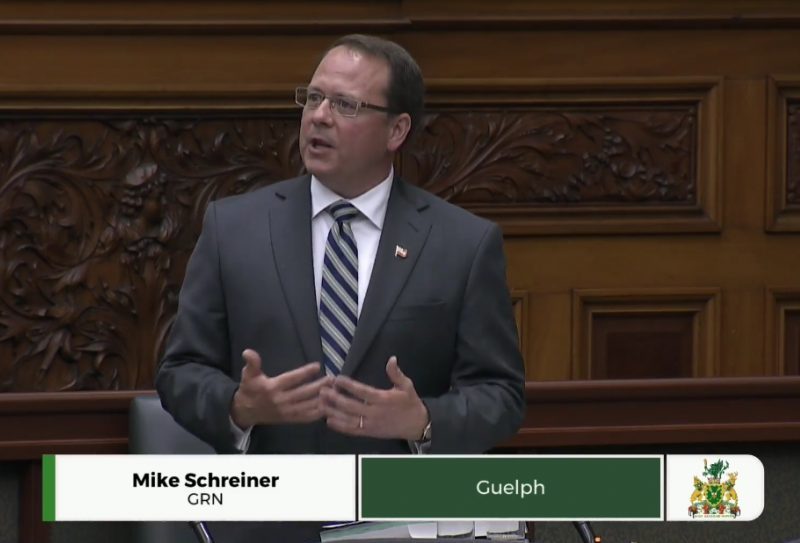 As the debate about using the notwithstanding clause to force changes to Toronto’s city council raged on Monday, a verbal tête-à-tête between Premier Doug Ford and Guelph MPP Mike Schreiner veered into some unanticipated local territory.

During Question Period Monday, Schreiner got one of the occasional opportunities he gets to ask a query of the government.

Mr. Speaker, my question is for the Premier. Early this morning during debate on Bill 31. The Premier said that he wanted to reduce the power of government. But Bill 31 does exactly the opposite. It places an unprecedented amount of power in the government’s hands. Invoking the notwithstanding clause is a government using big power to suspend people’s Charter rights. So how can the Premier say he is reducing power when he’s using the heavy hand of government power to suspend people’s Charter rights?

Premier Ford answered with something of a rambling response that was an answer to some question, but not the one that Schreiner was asking necessarily.

Through you Mr. Speaker, there won’t be any rights taken away.  This should be very clear: Every person in Toronto will be able to elect their elected councillor. Every single person in Toronto should be able to pick up the phone when they have an issue and call their councillor, and every councillor should go to their door and answer their request. My friends, I did it for four years, and I took care of more than one word. I took care of a dozen wards. You know why I took care of a dozen wards? Because the existing councillors were ignoring the phone calls, they weren’t calling people back, and through you Mr. Speaker, I still take municipal calls every single day on trains, on housing, on infrastructure, because the average constituent needs help.

Now here’s where we get to the Guelph connection, as Premier Ford again offered an answer, but not to the question that Schreiner was asking.

Through you, Mr. Speaker and to my friend and member from Guelph, we should start focusing on jobs. I’ll have to tell you a quick story. We had a company come to us, a company from China that wants to employ 400 people, a window manufacturer, and guess what Mr. Speaker, they wanted to go to Guelph, but Guelph refused them! Who refuses 400 jobs? I don’t understand it, but I’m sure there are jurisdictions all around Ontario that would love a glass company to come to their riding. Come to Etobicoke! Come to Scarborough! Come to any or our MPPs areas, we’d be happy to take 400 jobs! But the member from Guelph didn’t want 400 jobs over there, he’d rather come down here and argue.

A couple of things:

1) The “company from China” is Xinyi, and they applied to build a glass manufacturing plant in Township of Guelph-Eramosa, and not Guelph.

2) Mike Schreiner is not the MPP for Guelph-Eramosa, that would be Ted Arnott, a Progressive Conservative politician who is also the Speaker of the House.

3) Even if Schreiner was the MPP for Guelph-Eramosa, the decision to not allow Xinyi to build its plant was made by the Township council in a vote of 4-to-1.

4) Xinyi has so far chosen not to appeal the decision, and have made no announcement about their intentions to build elsewhere.

One thought on “Schreiner and Ford Tussle in Question Period”