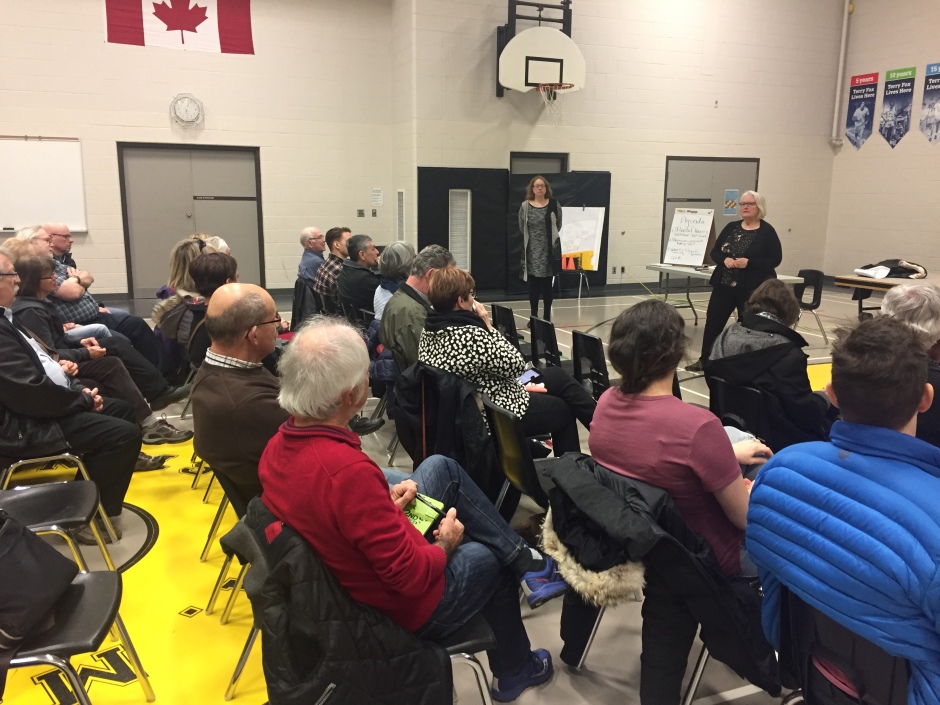 Although not the same draw it was back in the fall after Homecoming, a Ward 5 town hall last night at St. Michael Catholic School brought over 40 people out to hear from their city councillors and city staff about the progress made in preventing another excess of partying, and to hear about student housing issues.

City of Guelph senior staffers Bill Bond, Senior Bylaw Administrator, and Pat Sheehy, Program Manager-Zoning, were on hand to talk about housing issues. Ward 5 Councillors Leanne Piper and Cathy Downer were there to hear residents’ concerns and to facilitate the discussion. Here’s some of what we learned over 90-someodd minutes.

You can’t prove a negative.

The City’s not in the business of evicting people.

Bond said that the main point is to make sure that student renters are safe, and that minimum life safety standards are met.

If you’re concerned a neighbour’s building an illegal accessory apartment, you can see if they have a permit.

If you click here, you can put in an address and see if that property owner has applied for a permit to renovate. The City does inspect the permitted renovations to make sure they’re up to code, and no occupancy is allowed until a unit is deemed safe.

It’s not cheap to not do all the paper work.

Thanks to the Attorney General of Ontario, the fines have been increased if you’re found in violation of rental codes standards, up to $17,500 for the first offense, and up to $20,000 for the second, plus a year’s probation. And don’t think you can outsmart inspectors by shoving a bedroom’s worth of stuff in a closet or by booking an inspection in late December or July when students are away at home. They’ve seen all the tricks.

Parking-wise, you’re not as smart as you think you are.

If you’re one of those people that park your car horizontally on your driveway between the sidewalk and the road, you are actually breaking a bylaw and a concerned neighbour can report you to be ticketed.

One man said that he knows of a house on his street where eight guys live in a basement apartment, which is kind of a big violation, but he won’t make a formal report because he’s scared they’ll know it’s him and go for revenge via dog-icide. Despite assurances from Bond, Piper and Downer that his report would be anonymous, the man was still concerned. Bond pointed out that we all have a collective responsibility to report those things because these young people living there are in unsafe conditions.

Do you want the address?

One man’s question when Bond said that lodging houses can have up to 12 units, and while that can theoretically mean 24 people with two people per unit, City bylaw offices have never seen such an eventuality.

Guelph isn’t going the route of Waterloo with student ghettos, but there’s not much we can do to stop them.

There are no bylaws to allow or restrict the type of housing that can be built in one area, but zoning bylaws cannot discriminate on the type of people that rent a dwelling, and neither does the Ontario Human Rights Code. Basically, the City doesn’t care who’s in the house just what form the housing can be classified as.

Maybe, but that’s not the business model at the University of Guelph, where most students live on campus one year, and then move off campus. Presently, the U of G has enough housing for all who want it, and the trend is actually moving to more commuter students who are looking to save money on housing by commuting from home.

The results from St. Patrick’s Day we’re good, but it was just a dry run for Homecoming 2018.

U of G Student Life official, and frequent Politicast guest, Kathryn Hofer was on hand to answer questions about the wrangling of student parties. Hofer noted that things like the command centre, foot and bike patrols, and repeated notices from the University and the Central Student Associations about the consequences of out of control parties had the desired effect, and gave everyone involved a blue print for what to do next Homecoming. However, “something like Chancellors Way will happen at Homecoming again,” she added

St. Patrick’s Day is not as big in Guelph as Homecoming.

Hofer said that all stakeholders feel good about what progress was made with St. Patrick’s Day, but March 17 doesn’t draw people to town in the same way that Homecoming does. In fact, Many Guelph students went to Ezra Ave for the illegal street party in Waterloo. How do we know? Waterloo Regional Police set up checkpoints at entry points into the city, where some U of G students were caught with open alcohol, or in possession of alcohol while underage. The appeal is one big event. That’s what Homecoming is, and that’s what St. Patrick’s Day wasn’t (in Guelph anyway).

Students are part of the solution.

It was mentioned that getting the police to manage the parties is the wrong message to send out, and it’s got to come from the student population that there’s a way to drink without getting destructive. Piper noted that there were a lot of students who were ashamed of their peers and helped clean up the next day, and Hofer added that there was no negative feedback from the tough tone in advance of St. Patrick’s Day from U of G students. The response has to be long term too, where upper class students make it clear to new students that certain behaviours will not be tolerated.

Ontario Universities are trying to co-ordinate the Homecomings across regional campuses that school year, which will hopefully mean fewer people traveling between Homecoming celebrations over multiple weekends. In other words, if all campuses in southwestern Ontario have Homecoming on the same day, people might stay at home to enjoy the party rather than traveling each weekend to wherever the action is (so to speak).

So when’s Homecoming this year?

Many in the crowd made the point that the University and the landlords should be taking financial responsibility for rowdyism. The property management company for the buildings along Chancellors Way took financial responsibility for the Homecoming revelry, but going deeper, the Association of Municipalities Ontario (AMO) is petitioning for an increase in the “heads and beds” levy, an annual fee the province pays in lieu of property taxes for hospitals, universities, and jails. The levy hasn’t been changed since 1986, and it currently sits at $75, but with inflation alone, the levy should now by $175, so an increase may be warranted.

One person at the town hall was in a tear on a very particular issue. Watch out for pot smokers in Preservation Park and at Guelph Lake when cannabis is legalized, he warned. Your dog is going to eat that leftover reefer on the ground, and pass out, and you’ll have to lug your dog home.