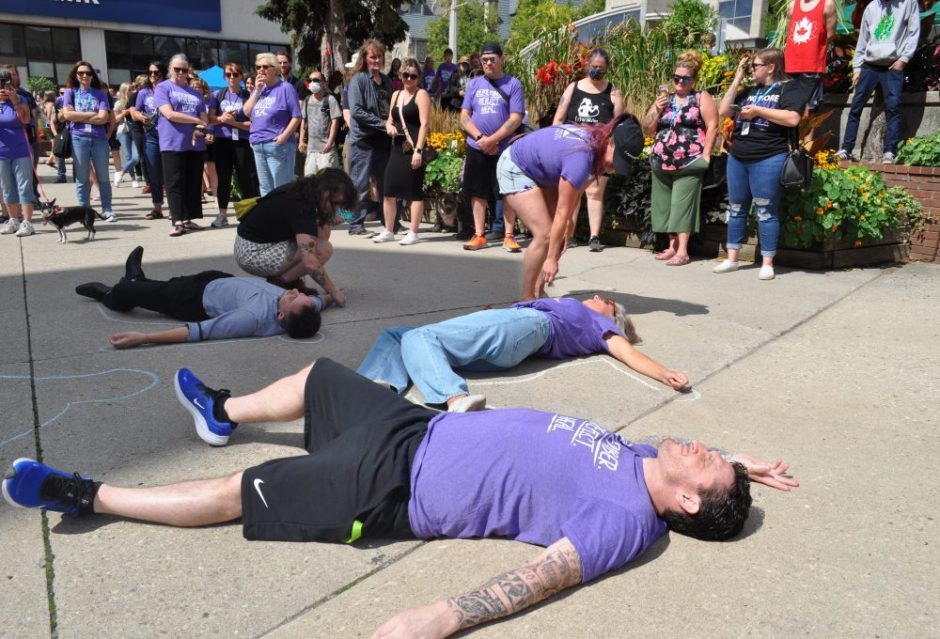 “International Overdose Awareness Day is the world’s largest annual campaign to end overdose, remember without stigma those who have died and acknowledge the grief of the family and friends left behind.” That’s what the day is officially about, but it means something different to everyone who’s experienced loss caused by the drug crisis. All those experiences were marked today in a packed event in St. George’s Square.

“As a society, we could actually take some lessons from addiction,” explained Karen Lomax, the overdose prevention co-ordinator at HIV/AIDS Resources & Community Health (ARCH). “You see, addiction doesn’t discriminate. It doesn’t care where you came from. It doesn’t care your gender. It doesn’t care the colour of your skin or your eyes. It doesn’t care if you work or if you don’t. It just needs a host. All human beings are welcome into the world of addiction.”

All people were welcome at Wednesday’s commemoration, the second for our area this week after a ceremony in Mount Forest last weekend. People with lived experience using substance stood alongside community workers wearing purple shirts, family members, and several of the people running for mayor and city council in this fall’s election. The message, and this year’s theme, was “Remember, Reflect, Heal,” and for Lomax, this year’s commemoration was especially reflective.

“It’s my last year in this role, and I know the work is not complete,” Lomax said. “In all fairness, we’ve barely even started up in the count, and there are quite a few small towns that make up northern Wellington. Opioid poisoning is not just a big city problem, it’s an everybody everywhere problem.”

Lomax’s role as the overdose prevention co-ordinator was funded through a grant from Health Canada’s Substance Use and Additions Program (SUAP) that runs out in March 2023 despite a one-year extension due to COVID. Lomax’s main regret is that it took this long to make inroads into Wellington County, where issues of substance abuse are just as prevalent as they are in the city, but with a very specific difference. 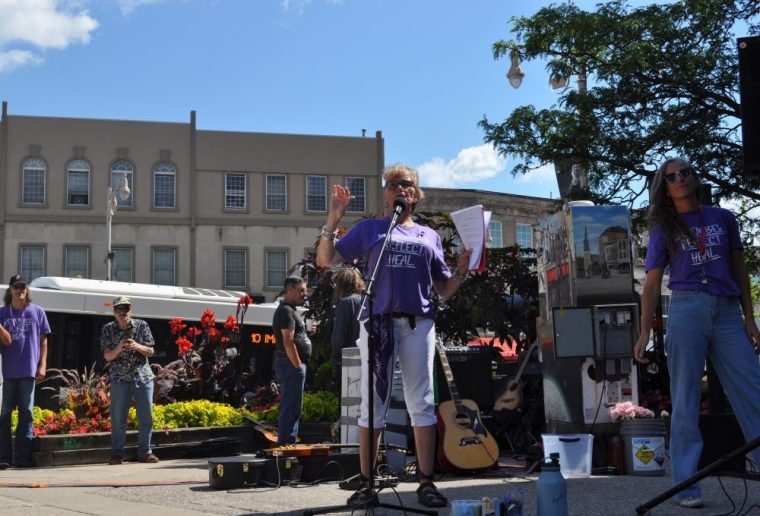 She knows from what she speaks because Lomax was once an addict herself. She started her path to recovery when a harm reduction co-ordinator told her to be safe, and Lomax remembers that as being the first time caught up in her addiction that she felt seen as a human being. After a year-and-a-half she started down the road to recovery that led her to take a similar role in harm reduction, or “slinging syringes” as she says.

“I’ve been told by different folks, ‘You’re a sign of hope. For us there is hope, there’s light at the end of the tunnel.’ You know what I mean? It’s allowed me to use that negative in a positive way, and to use that knowledge and the connection with the community in a positive way,” Lomax said.

At the observance, which also included a die-in plus a moment of silence, Lomax read an email sent anonymously to her from someone who once used substances, and compares the experience to living constantly with the worst thing you’ve ever done and having everyone know about it. The letter also challenged preconceived notions about who people with substance addictions are, and why they’re addicts.

“As children, we don’t decide we would rather be an addict instead of a cop. You don’t see children pretending that their dolls and stuffed animals are dope sick. When’s the last time you talked to a younger child and they told you they couldn’t wait to grow up to turn tricks, or do whatever to feed the insatiable hunger of drug addiction? I damn sure didn’t blow out my candles wishing for substance abuse,” the letter said.

“Since I’ve had the disease, I will spend the rest of my life struggling to stay high or fighting to stay clean,” the letter writer added in a call for sympathy. “So please, before writing another post bashing people who are suffering, think about it: Not only are you hurting the people that have the disease, you could be hurting everyone that loves them. What did they do to deserve the awful things you put out into the universe that do nothing but perpetuate hate and judgment.”

In a statement on behalf of Wellington-Dufferin-Guelph Public Health, associate medical officer of health Dr. Matthew Tenenbaum noted that while so much effort has been spent fighting the global COVID-19 pandemic, more resources and co-ordination needs to be brought to the overdose crisis.

“While much of our attention was focused on fighting this global virus, the most vulnerable in our society dealt with isolation, lack of awareness and reallocation of resources that exacerbated the ongoing challenge of supporting those caught in an epidemic of drug overdoses,” Tenenbaum said. “Overdoses have impacted all sectors of our community and that is why working to keep an awareness on this societal challenge is timely and worthwhile.”

Back downtown, Lomax, looking back on her six years as overdose prevention co-ordinator, said that awareness is less a problem now than acceptance.

“I think we’re getting there, but we still don’t want them in our backyard,” she observed. “We put such pressures on folks to get sober and when they’re ready to make that change, we have nothing for them. We have no affordable housing, we don’t give them enough money to live, we don’t give them enough money to rent or eat or make improvements. How can we expect somebody to embrace sobriety and change their ways when there are no supports on the other side?”

Lomax herself will be going back to the daily work of harm reduction next spring, and still doing her part to reduce the stigma and making people feel like they still have someone in their corner, because the do.

“You can’t believe how many times I’ve said to someone, ‘Please be safe,’ and they’ve stopped in their tracks, turned and looked at me saying, ‘Are you talking to me?’ And I say,  ‘Damn straight, I’m talking to you, please be safe, or I’ll kick your ass!'” she said. “The smile you get, it’s genuine, and they honestly believe you mean that.”