It was tough navigating downtown on Thursday afternoon. At one intersection, Wyndham and Macdonell Street were closed for the enjoyment of patio dinners, while up the road, at Norfolk and Macdonell, the streets in front of the Basilica of Our Lady were closed for a very different holiday activity. Hundreds of people in Guelph used their Canada Day to support local Indigenous people as we all continue to cope with the reckoning around residential schools.

“I’m thinking about that number, it’s 1505 now, 1,505 children, and how people just walk around like it’s nothing, people down there have their little Canada Day lunches,” said Xico Lopez, a local Indigenous youth that has taken part in many of these events. “I don’t really have any words to describe the way it feels to know that everywhere you walk is a cemetery, and to see the symbols of colonialism everywhere.”

Lopez, other Indigenous people from Guelph and area, plus allies in the settler and newcomer community gathered in front of the Basilica for the second time in the last month. The first gathering on June 2 was in response to the discovery of 215 unmarked graves at the Kamloops Indian Residential School in B.C., but in the last week alone, 751 graves were discovered on the grounds of the former Marieval Indian Residential School in Saskatchwan and an additional 182 graves at the the former St. Eugene’s Mission School near Cranbrook, B.C.

“Indigenous people have always known the truth, and what is happening now is a new freedom, a time where all of the truth is being known and seen and heard,” said Toni, who is Inuk from northern Quebec, but in her words she was “stolen” from her people and brought to Ontario where she was raised.

“We happen to be together on what is called Canada Day. It’s a day of reflection, and we will go on,” Toni added. “I implore everyone everywhere, not just in our group here, to go in kindness. Our hearts are together today, and we are working for the common good whether we know it or not. We are finding that harmony today that needs to happen every single day and in support of the times to come because there will be more unearthings at other residential schools.”

In keeping with the theme of reflection, Toni wasn’t the only speaker to lament the culture they lost because of the residential school system.

“I don’t know how to introduce myself in my language because I got that opportunity ripped away from me as a child,” said Jade. “I’m not going to say too much because I’m very angry about everything that is going on, but if the death of 1,500 children doesn’t piss you off, something’s wrong with you.” 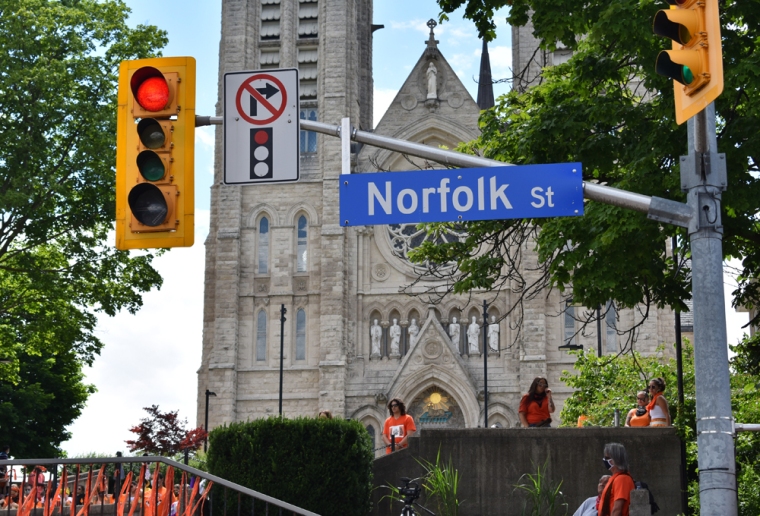 The front steps of the Basilica of Our Lady was adorned in orange crepe paper, and someone had painted red in places to make it look like blood had been spilled on the steps and on the walls. Guelph Police Service had shut down the intersection in advance of the gathering on Norfolk Street in front of the Basilica, and then later closed the streets ahead of the advancing march.

Other speakers would bring the issue closer to home. Layla Black, a Mohawk from the Six Nations where one of Canada’s oldest residential schools resides, the Mohawk Institute. Black talked about the “coat of shame” she inherited because of her Indigenous heritage, the struggle against racist stigma and sentiment, and her long struggle to reclaim the culture she lost before she was even born.

“I knew I was connected in some way to this land, I knew that I had this fire inside of me, but I didn’t know anything about it. I had been taught to hide it,” Black said. “I remember as I started to seek my culture and go back to my community that I was afraid. I was afraid they wouldn’t accept me. I was afraid I wasn’t native enough, but I went anyway.” 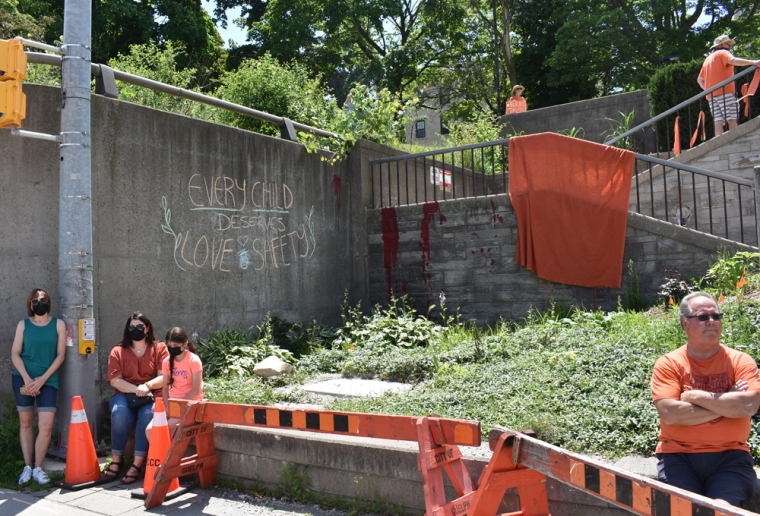 Black discussed her time working at the Woodland Cultural Centre, which is based in the third and final iteration of the Mohawk Institute. She recalled the story of man named Geronimo Henry, who spent 11 years at the Mohawk Institute from the age of five and never once was told that he was loved.

Skyler Williams, spokesperson for the protestors at 1492 Landback Lane, also talked about the need for love and healing among Indigenous people. How the time had come for all Indigenous peoples to re-connect and overcome the colonial institutions that have been driving them apart.

“When we talk about that connection with the land, when we talk about that connection to community in our nations, that was the connection that those schools, these churches, this governments, those cops, and those courts all try to separate us from,” Williams said. “The time for Prime Minister tears and apologies and grandstanding is over. The time for action is now, and we need to be able to push to make sure that we get it.” 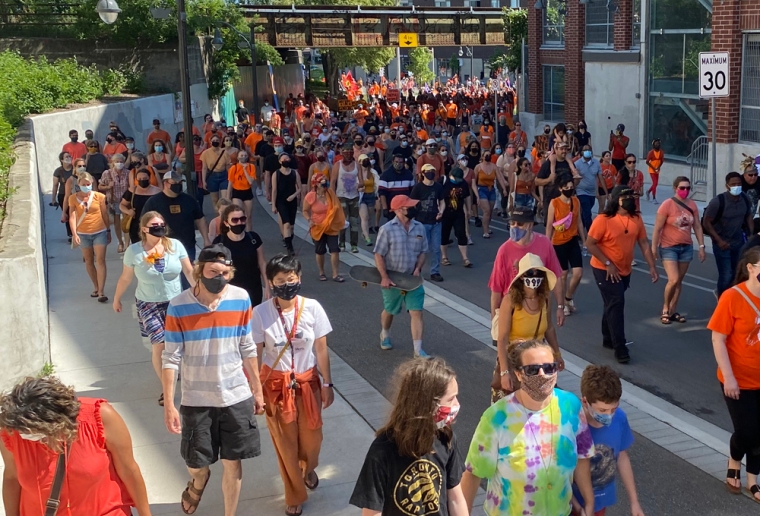 “The fight for us isn’t a fight about weapons and guns and using our fists, it is about being able to love each other,” Williams added. “We need to be able to have that fierceness that we talk about with that warrior spirit, and be able to fiercely love the fuck out of each other because that is what is needed to be able to make any change.”

Maura Winkup, one of the organizers of the event, was the last to speak. Appearing with her father, Winkup said she had never imagined such an occasion because like so many Indigenous people, she had to struggle to learn about her history, her culture, and her family.

“This is really bringing a sense of community, and I think that’s really important right now because a lot of people I talk to, especially the Indigenous, don’t know their family, don’t know their nation, don’t know where they come from, and don’t know where to start,” Winkup said. “Having this here is a good starting point for people, and I feel extremely, extremely grateful to be standing here with my father, which is something I never thought was possible, and it was only possible because of the community getting us connected.”

After the speeches were over, the hundreds of people that turned out marched through the downtown and around the core before heading up Gordon Street and finishing at city hall. Along the way, it might have rung in the heads of many marchers the question of what comes next. This is one Canada Day, what about next year?

“I just hope none of you are celebrating Canada next year or in any year ever again,” said Lopez. “Are you gonna call yourself a Canadian in pride? Are you gonna tell your families to tear down their flags? Are you gonna start looking for something beyond this fabricated identity that makes you loyal to them? Are you gonna question all of the things that we have in this country, and all of our institutions? I hope so.”

People taking part in Thursday’s march were given a flyer with suggestions for ways to keep the conversation going, or ways to take action to help Indigenous people locally by getting in touch with Aboriginal Outreach at the University of Guelph, and Anishnabeg Outreach. For something with more of a national reach, you can also donate to the Residential School Survivors Society, who are available 24 hours a day or seven days a week if your residential school survivor at 1-800-721-0066.