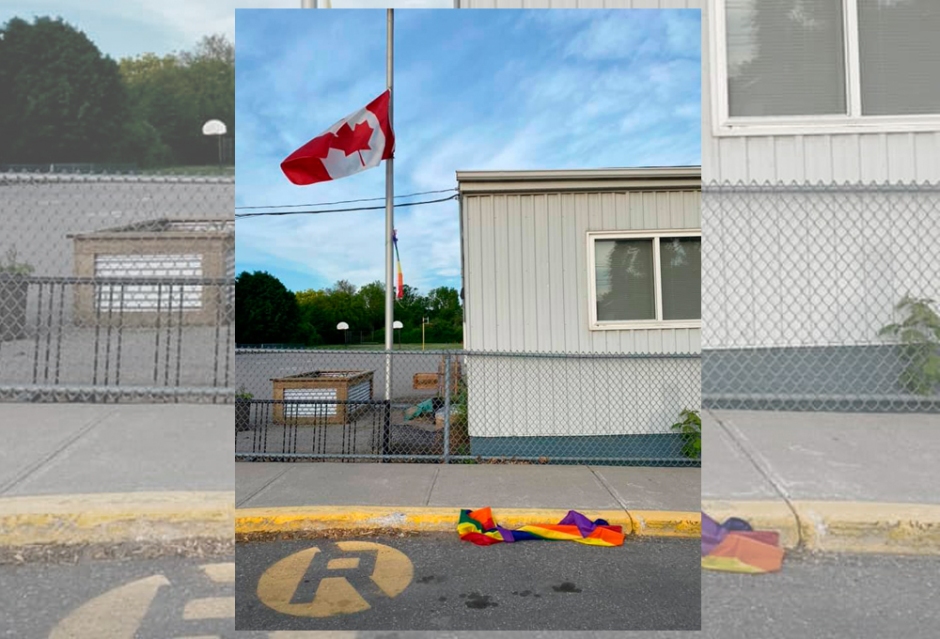 It’s Pride Month, and that means 30 days of celebration and recognition for the members of our community who identify as LGBTQ+. So the rainbow flags are flying on flag poles all around town, but it seems like there are people in Guelph who cannot actually take any pride in Pride. In fact, some delinquent person or persons tore the Pride flag right off the pole of an area school over the weekend.

“On June 5, we became aware there had been an act of vandalism at Sacred Heart Catholic School. It was reported that a Pride Flag, which was at half-mast below the Canadian National Flag, had been torn or cut off sometime early Saturday morning,” said Director of Education Mike Glazier in a statement.

“Our maintenance staff collected the discarded flag early yesterday morning and we will be raising a new Pride flag this week as a replacement,” added Sacred Heart Principal Nicole De Francesco in a letter to parents.

Guelph Police released their own media statement on Saturday saying that they were investigating the situation. “Police were informed by a local citizen that the flag appeared to be ripped down and was on the ground,” the statement said. “Police responded to the school, but were unable to locate the flag. A canvas of the area was completed and the incident is still under investigation.”

Anyone with information about the incident is asked to get in touch with Constable Emily Richardson at 519-824-1212 extension #7486, or email her at erichardson [at] guelphpolice.ca. You can also call Crime Stoppers at 1-800-222-TIPS (8477) or anonymously submit a tip at csgw.tips.

Regardless of the outcome of the criminal probe, Glazier said that this “act of vandalism” has shown that there’s still a lot of work to do in the community to promote acceptance and change and he thanked the community for the support that the school has received.

“Our school staff felt strongly that we needed to communicate our core beliefs after this act of vandalism,” added De Francesco. “Today, a number of staff and myself went to the school, and we put the Pride flag, our core beliefs, and an orange heart with ‘Every Child Matters’ in the windows of our classrooms. We wanted to express that our school’s mission, after our namesake, the Sacred Heart of Jesus, is to love.”

Although this crime happened in Guelph it is not unique to Guelph.

Last week, Halton Regional Police confirmed that Pride flags were stolen from the lawns of several homes in a Burlington neighbourhood. Although the flags were eventually returned with an apology note, Halton Police are still investigating.

The thefts came after the Halton Catholic District School Board refused to allow the raising of Pride flags at Halton Region Catholic schools at an April meeting despite a petition with over 15,000 signatures and broad support from both students and teachers. In Waterloo, the Catholic Board’s decision to allow the raising of Pride flags resulted in two trustees quitting the school board last month.