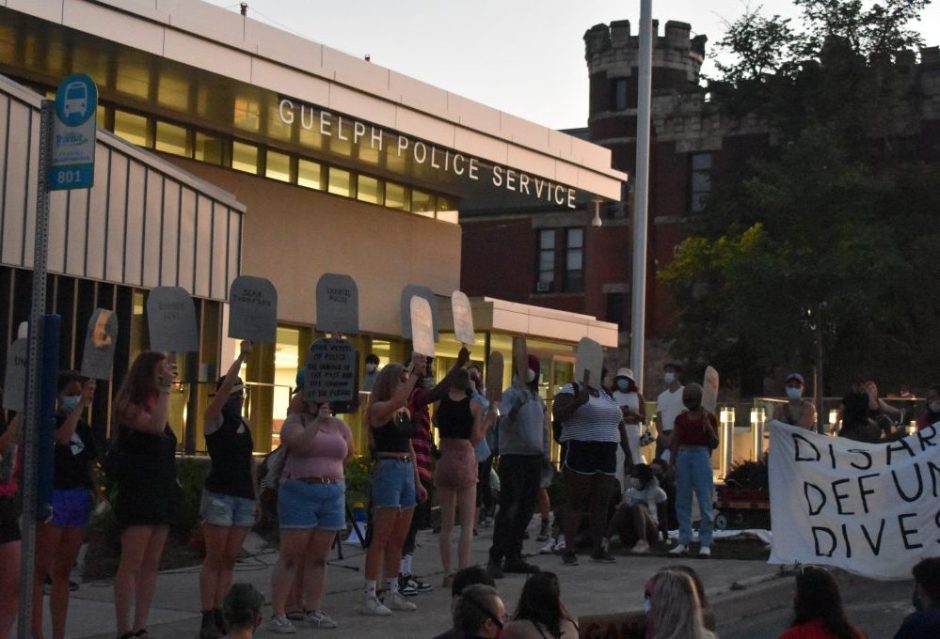 The slam of a hammer against wood echoed throughout the street. It was the sound of a demonstrator hitting the post of a sign depicting a gravestone into the carefully manicured grass in front of the Guelph police headquarters late on Wednesday. Like many communities across Canada, Guelph activists spent the anniversary of the country’s birth demanding an end to police brutality, and to add their voices to the “Defund the police” movement.

On Wednesday evening, a couple of hundred people took part in the Guelph Black & Indigenous Solidarity Rally Against Police. The Facebook event that organized the march asked people to gather in Lyon Park to demand that the City of Guelph disarm, defund, and divest from the Guelph Police Service and reallocate the funds to community services.

The event was also held to remember those who have been killed in action by polices services in Canada including Rodney Levi, an Indigenous man shot and killed by police at the age of 47; Regis Korchinski-Paquet, a 29-year-old Indigenous-Black Canadian woman who died after police carried out a wellness check; and, Stewart Kevin Andrews, a 22-year-old Indigenous man shot dead by police. These names, and many others, were etched into the grave markers that protestors posted in the grass outside Guelph Police headquarters Wednesday night.

At this point in the evening, there were still some 100 people gathered on the pavement as red and blue light from nearby police cruisers flickered in the dusk. A rally that began earlier in the evening as boisterous and emphatic became reverent and silent as the names of over a dozen People of Colour from across Canada were read out loud. All of them were allegedly killed at the hands of those charged with protecting the peace.

Leading up to that solemn moment, the message was clear and enthusiastic as demonstrators marched through town in the evening light: there needs to be an end to police violence against People of Colour, and political leaders should be taking action now to cut funding to the police.

“We say that these demands are just the beginning when the ultimate goal is to create a community that doesn’t even need police anymore, a strong community,” activist Xicotencatl Lopez told a mixed crowd, united in the cause for Black and Indigenous justice. “We believe that there was a time before police and there will be a time after the police.”

Building on the momentum of the Black Lives Matter rally in early June, Wednesday’s protest was carried out in opposition to the traditional celebration of Canada Day, as well as in resistance to police violence. The march and vigil highlighted the oppression of Indigenous Peoples that took place at the country’s birth, and continues until this day.

When the march reached Police headquarters, those attending wanted to leave more than just words to think about, they wanted to literally leave a mark. A sole demonstrator took a spray paint can to the surface of Wyndham Street South, and wrote “Defund the police” on the street, and within moments dozens jumped out of the crowd with chalk and thick black paint to augment the message and add their own statements.

The rally started off at Lyon Park with poetry and words of reflection in the face of police violence. After gathering in the park, between 200 and 300 protestors marched down York Road and headed towards the core, where they went up Gordon and weaved around down Wyndham to their final stop.

Back at Lyon Park, Dave Hudson, a Black father of a two-year-old girl, stood up to read a poem that touched on the concerns that he had about police violence against children like his across North America, and wondered whether it would happen to his little girl one day.

“I wonder if she’s walking home, her Blackness a threat called in by the neighbours, would she end up like Elijah McClain killed last August by police in Aurora, Colorado? Will she lose an eye to the fists of an off duty police officer as the Dafonte Miller did in Whitby? What if she acts the wrong way at school, would she be assaulted by police, as was recently the case in Mississauga?” Hudson asked.

Hudson, who works at the University of Guelph Library, also questioned police brutality by asking what the police are protecting specifically.

“Let’s never settle for that larger polite violence, or that violence of the normal routine: the line of cops guarding the banks and boutiques; the wealthy neighborhoods; the officers on desk duty pushing deportation papers forward; the armed officer weapons safely holstered civil professional and friendly calmly ticketing homelessness,” he added.

Hudson also pointed to a hope of real change, calling on the Upper Grand District School Board’s Police Presence in Schools Task Force to “make the right decision” and remove officers from its schools.

A speaker who was not identified by name and came from outside of the Royal City, told the crowd at Lyon Park that she was disappointed that many of the Canadian protests in solidarity with the Black Lives Matter were only emphasizing “peaceful” protest specifically. “No law has ever been changed unless it is broken,” the speaker said, adding that she would like to see similar action to the United States where statues of historic figures with ties to Black slavery have been taken down or defaced.

BREAKING: Fireworks are set off on the pedestrian bridge downtown @adamadonaldson pic.twitter.com/yhY2CL8yds

While fireworks were set off on the pedestrian bridge downtown as the rally passed below, and messages, some explicit, were painted on the road, this march was largely peaceful. The Guelph Police Service did block off traffic for the march, but officers largely kept their distance during the three-hour demonstration.