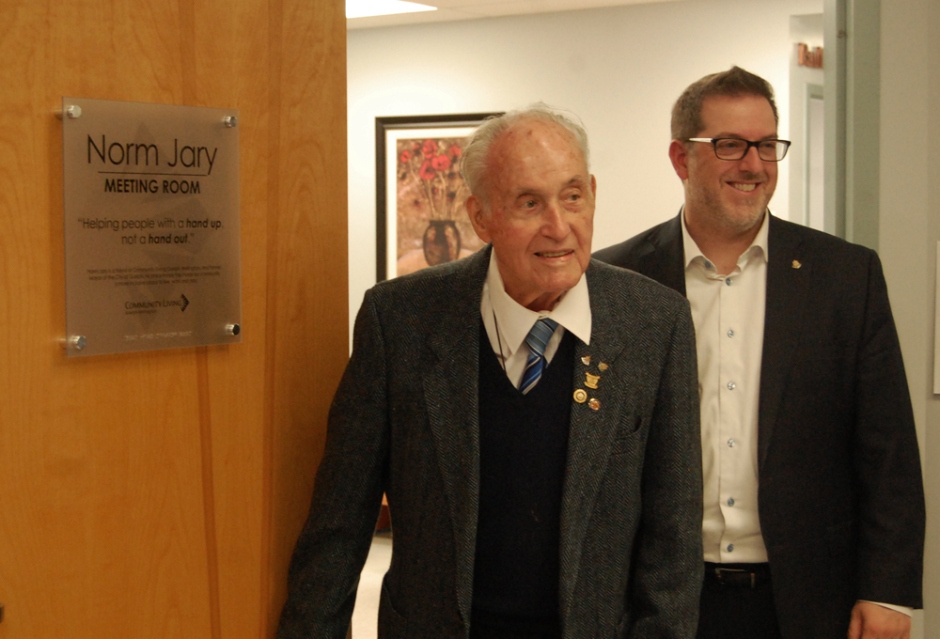 Norm Jary is Guelph longest serving mayor, and its longest serving city councillor. He’s fondly remembered in the Royal City for his dedication to municipal affairs, and for his years of broadcasting out of CJOY. You can’t find a long-time Guelphite without getting a dose of fondness for Mayor Jary, so what do you get the man that has everything? How about naming a board room after him?

Community Living Guelph Wellington held a small ceremony at their office on Friday afternoon to offer some small bit of appreciation for Mayor Jary, and the 42 years he lent his name and support for an annual golf tournament. That tournament raised over $1 million for Community Living in the course of its life, and although there’s no longer a tournament, there’s a new meeting room in the CLGW building that will always have his name on it.

“It’s a very small way to honour a great man,” said Laura Hanley, the executive director of Community Living Guelph Wellington. “I had the pleasure of working with [Jary] on the golf tournament here for the last few years, and he’s just such a giving and caring man, so it’s been wonderful to be able to honour him in some way.”

Hanley said that Jary always went above and beyond just lending his name to the annual tournament. “It wasn’t just about a name, he came out and was part of the committee, he got prizes, he golfed for years, and got his kids and grandkids golfing, he just always shows up, and he’s always positive,” she said.

Mayor Jary reacted to the new tribute with his typical humility.

“It’s a wonderful honour to have, and I appreciate it very, very much. I have a park named after me, now I have the meeting room named after me, maybe next it’s going to be a washroom,” he joked. “No, this is indeed a beautiful honour. As Einstein said, only a life lived for others is a life worthwhile, and that’s pretty good model for all of us to try and follow.”

“There was so much said by the politicians earlier today, but the one word they didn’t mention that has always been synonymous with my dad is integrity,” said Mayor Jary’s son Norm. “You can call it the ‘Norm Jary integrity room’ because if you walk in with integrity, and walk out with integrity, you have accomplished a lot.”

The Jarys were joined by Guelph’s present Mayor, Cam Guthrie, who said that Mayor Jary has earned many accolades in his life and career, and the words on the new Mayor Norm Jary meeting room about giving people a hand up, not a hand out, are a perfect tribute to the former mayor’s philosophy and that of Community Living.

“It’s nice to have this recognition for him in this place, and I think it will spur on conversations to shed a little bit more light on the good work that happens here and that can sometimes go unnoticed,” said Guthrie. “[Jary]’s really shone a light on Community Living to create conversations about the people that are helped here every day.”

“Norm’s been a community builder par excellence, not only in his time as mayor and as a city councillor, but for all the years since that he’s been raising money for Community Living Guelph,” added Guelph MPP Mike Schreiner, who was also onhand for the unveiling. “What a great contribution to give people here a hand up.”

Community Living is a non-profit that helps people with intellectual and developmental disabilities with finding work, a place to live, getting involved with recreational activities, and what ever else they need to get them more involved and more connected to their community. There are 105 Community Living branches across Ontario, but Harley hopes that the Norm Jary room at her branch is a symbol beyond the good work that Jary did for Guelph and Wellington Community Living.

“My hope is that people are going to walk in here and they’re going to smile at a fond memory of Norm in whatever capacity they know him,” Harley said. “Many people know Norm, and whenever he shows up here for meeting I don’t see anybody walk by as if they don’t know him.”