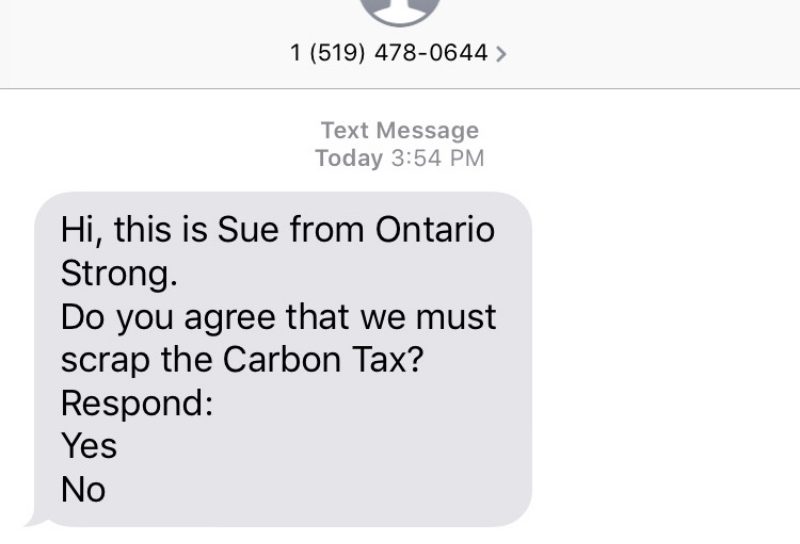 A report by Postmedia has linked a series of text messages sent by someone who identifies themselves as “Sue” from “BC Strong” to iMarketing Solutions Inc., a marketing firm that was founded by the directors of Responsive Marketing Group. Why does that sound familiar? Remember the Robocall scandal of 2011?

The article, which appeared in the Vancouver Sun, interviewed Victoria resident Patrick McFadden who received a text message “Sue” from “B.C. Strong” asking if he agrees with the statement that “we must build pipelines to export Canadian oil.” Ontarians will be familiar with the sentiment, if not the exact wording. Social media has chronicled several people receiving text messages from “Sue” who, here in Ontario, is speaking for “Ontario Strong.” This text message asks “Do you agree that we must scrap the carbon tax.”

In B.C., McFadden used his skill and access as a tech worker at Iris Dynamics to get the I.P. (internet protocol) address associated with the phone number the text message originated from. McFadden was then able to do a reverse DNS (domain name system) search to find out that the text came from iMarketing. Postmedia reviewed McFadden’s work, and confirmed that iMarketing is the behind “Sue”, at least the “Sue” of “B.C. Strong.”

iMarketing identifies itself as “an industry leader for over 30 years,” and that it’s “North America’s preeminent integrated marketing services company.” The fine print on iMarketing’s website lists the Responsive Marketing Group as part of the iMarketing group of services, and Postmedia notes that Andrew Langhorne, the CEO and President of iMarketing is also the COO of Responsive Marketing.

Visiting both the websites for iMarketing and Responsive Marketing through, you might notice they have a similar management structure. 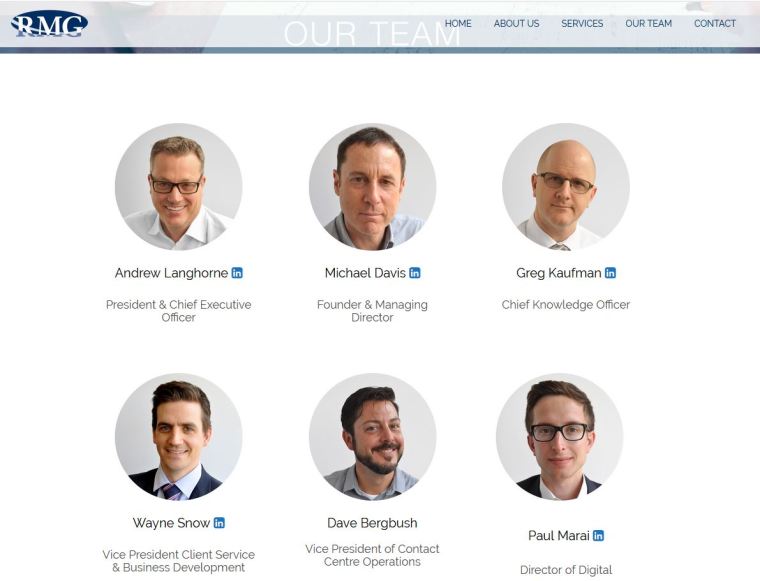 So why does this matter? Flashback to 2012 when the Robocall scandal broke. While the robocalls that attempted to re-route Guelph voters to a fake polling location in Old Quebec Street was linked to the Alberta company RackNine, there were other calls made in dozens of other ridings across the country.

In February 2012, workers from an RMG call centre in Thunder Bay told the Toronto Star that they were instructed to read scripts telling voters that Elections Canada had changed their polling location, in some cases to a new location that was on the other end of town from where the voted lived. One worker told CBC As it Happens that it seemed like they were “swaying people to not be able to make their correct vote.”

In an interview with the CBC, a former RMG supervisor blamed inadequate training as the reason why the calls were made with incorrect information. Jeff Harrietha told the broadcaster that RMG would hire new employees who would “come in with a resume and they’d be on the phone within 15 minutes.”

“In any call centre on the best of days, there’s mistakes made,” Harrietha said. “But, if you inadequately train people, the mistakes are obviously magnified.”

The next day, RMG released a statement saying that they were hired by the Conservative Party of Canada to contact people already identified as supports, and they were only supposed to re-affirm their commitment, make sure they have the correct voting location information, and encourage them to vote on Election Day. RMG also affirmed that they at no time participated in voter suppression activities.

Neither iMarketing Solutions nor Responsive Marketing responded to Postmedia’s request for comment. Only their legal counsel, Rajiv Arya, offer any kind of statement, and it was a “no comment.”

Postmedia also sought comment from the Conservative Party. Spokesperson Cory Hann said in an email that while the Conservatives still use RMG as a vendor, the party has no affiliation with the “Strong” groups.

Back in 2013, RMG sought and received bankruptcy protect to restructure after losing $3.9 million in one quarter. No charges were ever filed against Responsive Marketing Group, and only one person was ever fired in relation to work done on behalf of the Conservatives, an overly aggressive call centre employee who was making fundraising calls.

The mystery of Ontario Strong and similar sites has been a topic of curiosity since the text messages started going out. Many assumed a connection to “Ontario Proud,” a Facebook page many consider a factor in the defeat of the Ontario Liberals in last year’s Provincial Election. It was revealed last December that tens of thousands of  dollars were donated to “Ontario Proud”, which has since branched off into “Canada Proud,” from various construction firms and developers.

So who is “Sue,” what is “Ontario Strong,” and are they a “Pierre Poutine” waiting to happen? Time will tell.