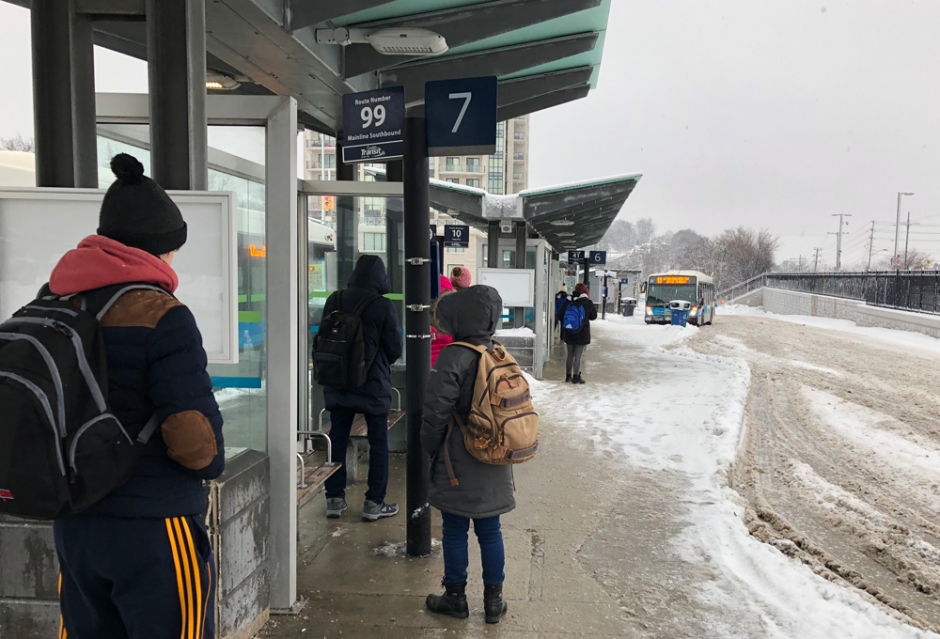 The final of three pilot service reviews comes back for council’s consideration next week, and this one is all about Guelph Transit.

The service review also found that Guelph Transit has enjoyed stable revenue to cash performance over the last three years, and that there’s a fairly high level of satisfaction with transit services; 69 per cent of those that responded to a survey said they were satisfied.

Having said that, the one area that’s probably not creating a lot of satisfaction is the fact that, on average, 3.6 per cent of all runs are dropped or missed. That’s almost one out of every 25 trips. “Vacancies and absenteeism rates have a significant impact on the available hours of work and service reliability,” the report says.

The report comes with 12 recommendations for council’s consideration. For the record, the Solid Waste Service Review came back with 11 recommendations.

So the recommendations are:

1. Set a funding and fare pricing policy based on a target net revenue to cost (R/C) ratio range of between 40 per cent and 45 per cent to support service and ongoing service improvements while reducing the potential financial impacts to customers. – The R/C rate is the potion of the Transit budget that’s paid for by passenger fares, ad revenue, and gas taxes. The rest of the budget is made of municipal subsidies. For the last three years, the R/C rate has actually exceeded projected amounts. If the R/C rate can match or exceed 45 per cent, then fare increases might be mitigated or avoided, and if they’re closer to 40 per cent, or lower, then a fare increase might be more likely to be in the offing.

2. Expand and rebrand the Community Bus. Increase from the current two-bus service to six buses by 2020. – In the case of the two Community Buses presently running from 8:30 to 4:30 Monday-to-Friday, they have an average passenger load of about 27,000 riders per year, or 70 per day. Through discovery during the review process, staff learned that transit users like the Community Bus as an alternative to the mobility service, and that they would like to see Community Bus service expanded. It they get their wish, it could cost $7,000.

3. Conduct an operational level route review, to review both holistic system changes as well as individual route modifications. – The two pieces of this involve looking at the type of network needed (hub and spoke, spine or grid, perimeter, express routes, or some mixture of the above) and identifying what route structure and frequency will best meet the needs of riders. Prominently mentioned is the possibility of building a network around three hubs at the Smart Centre, the University of Guelph, and Guelph Central Station.

4. Update the Transit Growth Strategy (Transit Strategic Plan) to provide direction for conventional and mobility service to 2040, supporting the Corporate Transportation Master Plan. – This would study market growth and impacts, inter-regional transit, transit priority operations, technological developments like upgrading to an EV fleet of vehicles, and potential developments like LRT or BRT (bus rapid transit). The last time the Transit Growth Strategy was conducted was in 2010, and in the last nine years, Guelph has added 10,000 people.

5. Discontinue morning shuttle service (pilot project) to Guelph Central Station effective Q2 2019. – Somehow, this “pilot project” is still running more than two years after it started, and the service review reports that this shuttle bus that runs between 5 and 5:45 am averages about two riders per day. Cutting this service will save nearly $13,000 per year.

6. Review and renew the CoFare contract with Metrolinx. – So if you have a valid GO Transit ticket, you’re only required to pay a co-fare rate of 60 cents, while Guelph Transit invoices Metrolinx for $1.70. But that agreement was set in 2012 when Guelph Transit rates were cheaper, leaving 70 cents uncollected each time with the 2019 fare set at $3 per trip. The report recommends that that Transit update the contract, and thus generate about $5,000 more in revenue per year.

7. Develop and implement an operator re-certification program with dedicated training hours. – Once transit operators complete their initial six-week training as mandated by the Ministry of Transportation Ontario they don’t have to retrain unless they get in an accident or return from and extended leave. So it’s recommended that every two years the operators should get a refresher course. The report suggests that 30 hours per year, per person, for retraining should be included in the work plan.

8. Adjusting the staffing structure at Transit to provide a dedicated Human Resources staff position, and better align the management structure. – At City Hall, the average ratio of management to staff is 1:27, but at Guelph Transit, that ratio is 1:88. At the same time, there is an average of 10 to 14 full-time equivalents on extend leave, an annual absenteeism rate of nine days per person, and the average turnover is seven to 10 per year. The hiring of a dedicated human resources staff person might lend to some stabilization, according to the report.

9. Separate vehicle maintenance cost reporting into two line items, one that reports asset specific maintenance costs and one that reports the remaining costs associated with internal fleet services. – Basically, the conventional buses and the mobility buses have different life-cycles, but the repair budget is kept as one list, so the service review suggest that it be kept as two going forward.

10. Implement the new fare box program with the capability for reusable tap and go passes (smart cards). – Here’s an interesting number: $28,000, that’s the amount of money that Guelph Transit loses per year on transit passes. They have to be bought in bulk in advanced, and are delivered in three-month increments, so at the end of the year, Transit has an annual loss of 28 per cent. Transit is presently working toward the installation of the Electronic Fare Management System or EFMS, which will use a reusable smart card that would be more akin to the Metrolinx PRESTO card than the current bus pass system. In addition to it being more cost effective, the tap and go card will, according to the report, save three minutes per trip on a standard 30-minute trip with 50 passengers.

11. Develop and pilot a program for Intelligent On-Demand Transit software with the Mobility Service, to improve service availability and service options. – Evidently, the scheduling for Mobility riders and dispatching vehicles is done manually. As in, not involving a computer. Apparently, the increased difficulty in booking leads to an increased rate of cancellations, which leads to a general decrease in efficiency for mobility service, so it’s recommended that Transit test out some new software that can allow riders to book online, change routes in real-time by taking into account traffic and vehicle locations, and improve scheduled pick-up times.

12. Stabilize the workforce to ensure sustainable provision of current level of service through base staffing increase of 19 operators. – As stated above, 3.6 per cent of all runs were cancelled in part of in full in 2017. On top of that, overtime costs for Transit have been going up at a rate at 20 per cent per year, and the reason is that there’s just not enough drivers to cover the system as it currently is. To that end, the report is recommending 20 new drivers to be phased in over a six-year period, adding $260,000 per year to the operating budget.

The total budget impact for adopting all these recommendations is $498,626, and that includes an additional recommendation to reinstate full service on routes #11 and #14 for a cost of $16,000. The recommendations also add potentially another $2.7 million in capital costs to fund the expansion of the community bus.

2 thoughts on “City Council Preview – What’s on the Agenda for the January 29 Meeting?”