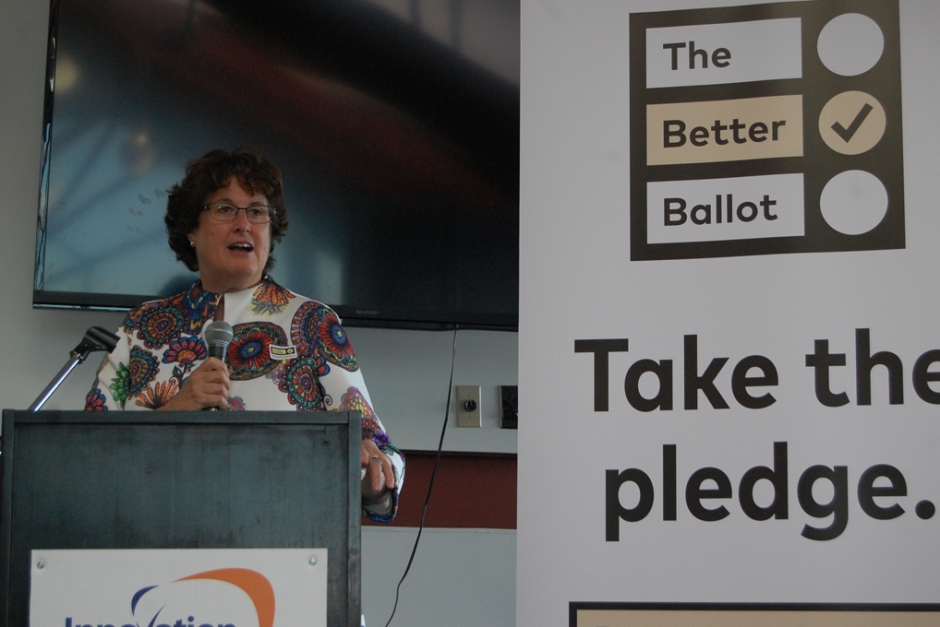 Minutes before the final City Council meeting before the Municipal Election, a group of Guelph citizens gathered to encourage candidates and voters alike to be on their best behaviour and avoid the harassment, and the perpetuation of harassment, while on the campaign trail for the next several weeks.

According to the organizers of the Better Ballot Campaign, the idea grew out of discussions at the Guelph-Wellington Women’s Campaign School earlier this year. The feedback from the over 50 people that took part in that training was that the threats of physical violence and online harassment were among the biggest reasons to *not* run for office.

“After the last municipal election we started talking to some of the candidates and one of the things we found that was really disturbing was how much energy was being sucked out of the campaign by negativity and online harassment,” said Teresa McKeeman of the Canadian Federation of University Women, one of the organizers of the Better Ballot Campaign.

Organizers said that although they’re launching this before before the Municipal Election, these ideals could be applied to any election at any level of government.

The pledge comes in two parts, one for voters:

And one for candidates:

Former Guelph Mayor Karen Farbridge understands first-hand the harassment that sometimes comes with being a woman in politics. Farbridge explained that during her last election in 2014, she was ill-equipped to be able to balance the riggers of campaigning while having to deal with, and respond, to the often misogynist attacks.

“When participating in a democratic system is biased against anyone, it’s not only unfair to them, but it diminishes our choice as voters because too many people are not prepared to risk the character assassination and harassment that too often defines the experience of public service today,” said Farbridge.

“We can disagree without being disagreeable,” she added.

Wellington-Halton Hills MP Michael Chong was another one of the invited speakers at the Better Ballot launch. He put the blame for some of the negativity in campaigning on the consolidation of power around party leaders, which results in more top-down campaigns as opposed to more community-based campaigning.

“At the end of the day, we don’t elect a legislature based on a person, a premier or prime minister, we don’t even elect a government, we elect a legislature,” Chong explained. “I think that by empowering local campaigns to better represent their constituents, and the more free of party power they are, the more that candidates will be able to speak substantively on the issues.”

Better Ballot is being sponsored by the Guelph chapter of the Canadian Federation of University Women, the Zonta Club of Guelph, Innovation Guelph, and the Guelph Wellington Business Centre. To learn more, or fill out a pledge sheet, you can click here.

“We know that people enter politics with good intentions, that they enter politics because they want to make a difference, and we need good people in politics if we’re going to have a well-functioning democracy,” McKeeman explained. “When it gets very negative, it’s not good for all of us because voters get discouraged, and that’s also not good for democracy”