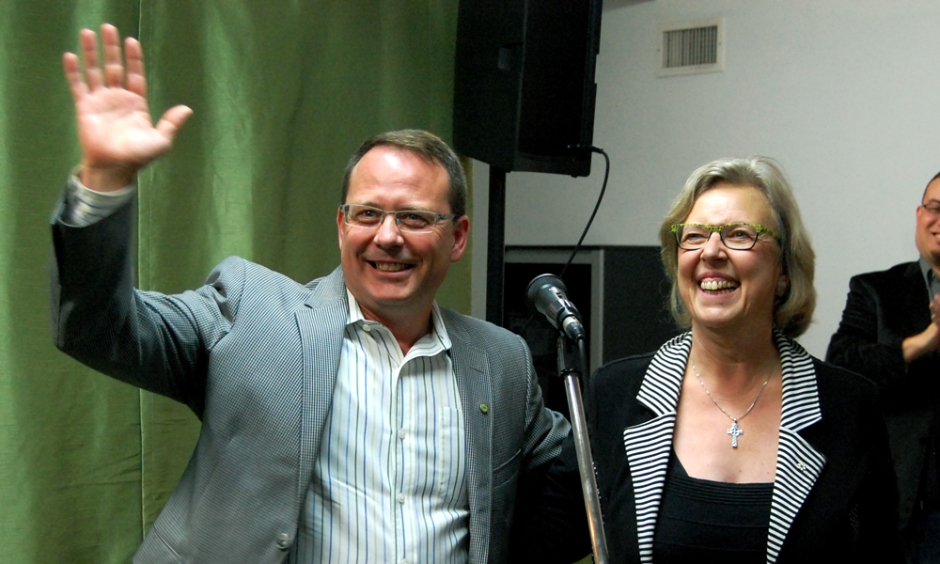 “Guelph is a green town,” declared Elizabeth May. The Green Party of Canada leader meant small ‘g’, not capital ‘G’ of course, but if it all goes according to plan, then this time next year, May and her Ontario counterpart, Mike Schreiner, will be able to boast that Guelph is both “green” and “Green”.

Schreiner, and several of his supporters, officially opened his campaign office at 163 Suffolk Street last night. Schreiner, as of this moment, remains the only acclaimed candidate of any political party to stand in the riding of Guelph for next spring’s provincial election. Incumbent MPP Liz Sandals announced last Friday that she will not stand for re-election.

Both May and Schreiner aimed to make a case for why a Green MPP for Guelph (along with a few other Green MPPs) will make a world of difference in Queen’s Park. Specifically, May noted the recent Green Party breakthrough in British Columbia where three Green MLAs now sit with the NDP to form a government, pushing for electoral reform, climate justice, and the adoption of the U.N. Declaration on the Human Rights of Indigenous People.

While May talked about the big picture, Schreiner stayed focused on the local picture. He told the crowd that they have 82 days until the water taking permit for the Dolime quarry expires, and he wants to make sure that they don’t get a renewal.

Schreiner also said that his is the only party that’s calling for the lowering of taxes on small businesses, which comes in the wake of attacks on the federal Liberals’ plan to close loopholes in the tax code, which some see as an insult to small businesses by comparing them to tax cheats. On the provincial level, Schreiner said that as compared to “two parties of big business, and one party of ‘no business'” the Greens have the advantage.

The Ontario Green leader added that he and his people have “punched above their weight” getting this far, but they’re going to have to punch harder to get Schreiner to Queen’s Park next June. Greens finished in third place in the 2014 election, and just 818 votes behind the Progressive Conservative candidate.

Check out the full speeches by May and Schrenier in the videos below, and listen to an interview with the two Green leaders this Thursday at 5 pm on Open Sources Guelph on CFRU 93.3 fm.