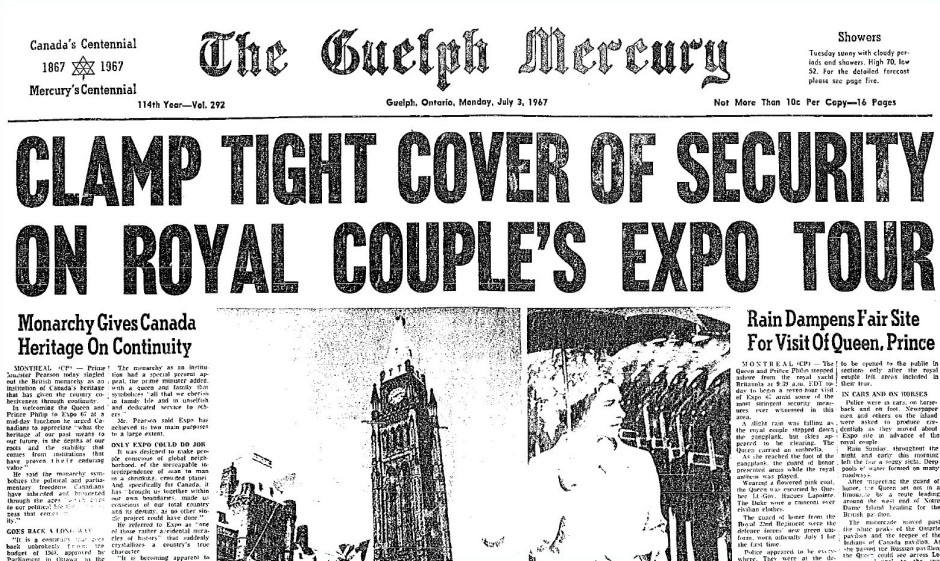 One glance at the front page reminds you instantly of the tumultuousness of the 1960s, even if everything going on Guelph seemed as normal as it ever was. In the days before Canada’s centennial, page one of the Guelph Mercury was filled with stories of a world on the brink. From the death of screen legends, to Cold War posturing, to racial tensions in the United States, was it any wonder that the Mercury was asking if this would be the Queen’s last State visit?

Of course, Her Majesty Queen Elizabeth II would return to the Canada many, many times after the centenary in 1967, but at the time, the excitement level of the Queen and Prince Phillip’s then pending arrival managed to rise above the salacious. On the front page of the June 29 Mercury, above the fold, was an AP photo of Jayne Mansfield’s sheet covered remains after she was killed in a car accident outside New Orleans. Meanwhile, down the road and across the border in Buffalo, 100 were arrested after a third night of rioting in the city’s “shabby” east side. African Americans in the area were apparently sick of no jobs, education or city services.

Back in Guelph, Canada Day festivities were being organized by the Rotary Club as it still is today. The Dominion Day parade would feature local luminaries like Mayor Ralph W. Smith, who would be pulled in a horse and buggy, and MPP Harry Worton, who would ride in style in a classic automobile. Worton was a baker by trade, and his Ottawa counterpart, MP Alfred Hales, was a butcher. As Smith and Worton would, would follow a parade route up through downtown and back around down Norfolk and Gordon, Hales remained in Ottawa to celebrate Canada Day with the Queen and his fellow Members of Parliament.

The parade would feature 60 “parading units,” according to the Mercury, the most of any parade held in the Royal City till that point. After that there would be a golf tournament at the Cutten Club, a tennis tournament at the Church of Our Lady, and for that Guelph touch, there was also a tournament at the Guelph Lawn Bowling Club. There would be festivities in Riverside Park, and evening fun in St George’s Square would include “ethnic” foods from places like Germany, Scotland, Poland, and the Ukraine. There would also be dancing till midnight. “Everything now depends on the weatherman and Guelph citizens as to the success of the observance of the official birthday of Canada,” wrote the Mercury.

Like this year, Canada Day fell on a Saturday, so Guelph was preparing for a three-day weekend with closure of government offices and banks to fall on the Monday. Work on the education and recreation complex behind Centennial College on College St. would also take the day off, the $400,000 project had been hampered by a bricklayers strike, which was still in effect on this July weekend. Even though the complex was to be “Guelph’s main Centennial Year” project, builders were projecting that it wouldn’t be till October before people could start using the completed facility.

There were some hiccups. In Brantford, five people were injured, including two children and an elderly woman who had to go to hospital, after a faulty mortar set off “several boxes” of fireworks during a private display. Even the Queen wasn’t immune to gremlins as the Christ Church Anglican Cathedral in Ottawa lost power for nearly an hour while Her Majesty was observing services there. Heavy rain had knocked down a high tension wire.

When speaking to a joint session of Parliament earlier, Queen Elizabeth II offered praise and concern for what was to come next for Canada. “This country is fortunate and prosperous above most others. But not all of its people are free from want or hardship,” she said. “There are still wrongs to be righted and suffering to relieved. There is still a constant effort of accommodation to be made so that all the peoples in this country may live together in friendship and harmony.”

In Guelph though, everything was sunny, at least in attitude. “The everlasting rain did not neglect the city, but came at times that were least harmful to the program,” wrote the Mercury in its July 4 editorial. “We suppose now that the major part of the shouting over Centennial is over, Canadians will retire, a little embarrassed by their unaccustomed show of exuberance, into their shell.”

“The Rotary Club of Guelph and members of the Centennial committee who arranged this city’s Dominion Day centennial celebrations deserve a vote of thanks form the entire popular,” they added. “From the reading of the proclamation by Mayor Ralph Smith in the morning until the last tired teen-agers went home early Sunday morning after their Wyndham St. rock and roll it was a grand day.”

Can Guelph party hardier for Canada’s 150? I guess we’ll see…