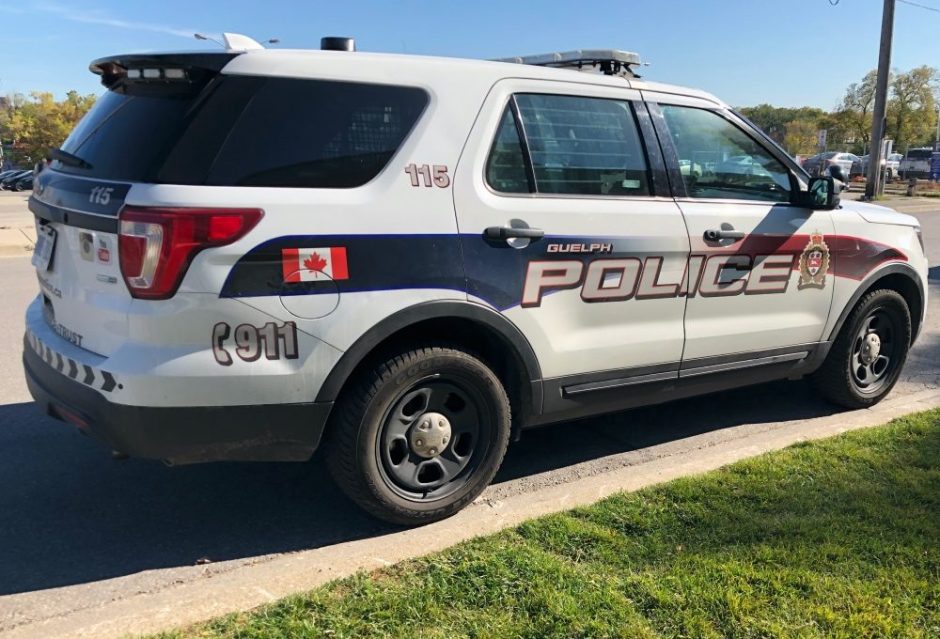 Police Board Meeting this Week

The monthly Guelph Police Services Board is this Thursday, October 27, at 2:30 pm. You can see the agenda here, and then tune in to the meeting on the Guelph Police YouTube page.

A 20-year-old Brampton man was arrested and charged with sexual assault on Tuesday in connection to an assault reported last July when a woman in the downtown area accepted a ride from a man, and was subsequently sexually assaulted.

Police were called to an apartment building in the area of Willow and Ajax on Thursday after surveillance video revealed a suspect using a tool to pry open the front door before stealing something from the laundry room. The suspect was describe as wearing a green jacket, black pants, grey running shoes, a backpack and a facemask. If you have any information, call Constable Scott Carroll at 519-824-1212, ext. 7489, or email him at scarroll [at] guelphpolice.ca.

Police are looking for a man described as wearing a light-coloured sweater with a hood, light pants, dark running shoes and gloves who they believe is connect to two break ins last Saturday, one at a business at Silvercreek and Woodlawn where $5,000 worth of damage was done in order to gain entry, and another business a short distance away where a side door had been pried open and a quantity of cash removed from the business. If you have any information, call Constable Graeme Adams at 519-824-1212, ext. 7419, email him at gadams [at] guelphpolice.ca.

At 11:20 pm on Monday night, approximately $200 in vaping products were stolen from a business at Gordon and Wellington after the male suspect smashed a window with a rock causing $500 in damage. Bars on the window prevent the thief from taking more product. If you have any information about this case, call Constable Chris Cheung at 519-824-1212, ext. 7435, or email him at ccheung [at] guelphpolice.ca.

Police stopped a vehicle driving 101 kilometres per hour in a 60 zone along Speedvale near Elmira on Sunday evening, and discovered both a switchblade knife and quantity of marijuana both within reach of the driver. A 33-year-old Guelph man was charged with stunt driving, speeding, driving while suspended, driving with open cannabis, possessing a prohibited weapon and possessing a weapon contrary to an order. His passenger, a 29-year-old Guelph man, was also charged with possessing a prohibited weapon, possessing a weapon contrary to an order and two counts of failing to comply with court orders.

A 48-year-old man from Niagara on the Lake and a 35-year-old man from Markham were jointly charged with uttering a forged document, possessing an identity document, identity fraud, identity theft and attempt fraud over $5,000. On Thursday, they tried to open a bank account at a south end bank using fraudulent documents. The man from Markham was also charged with two additional counts of possessing an identity document.

An orange Kubota SVL90 skid steer valued at $95,000 was stolen from a business on Elmira near Speedvale in the early morning hours on Wednesday. Someone on an orange skid steer was then seen causing damage to a railway gate in the area of Edinburgh and Lonsdale at approximately 4 am. If you have any information, call Special Constable Allie Johnston at 519-824-1212, ext. 7457, email her at ajohnston [at] guelphpolice.ca.

A white 2015 GMC Sierra twice ticketed by Guelph Bylaw on Thursday was identified as stolen in another jurisdiction. Surveillance video showed two men and a woman leave the vehicle at approximately 8:45 am on Thursday in a downtown parking lot. If you have any information, call Detective Constable Cameron McKeen of the Break Enter Auto Theft (BEAT) Unit at 519-824-1212, ext. 7361, or email him at cmckeen [at] guelphpolice.ca.

A quantity of cash and an electronic safe were stolen from a business on Silvercreek North around 4:10 am last Friday. If you have any information about his case call Constable Bakir Medencevic at 519-824-1212, ext. 7235, or email him at bmedencevic [at] guelphpolice.ca.

A 16-year-old was walking home at approximately 3:30 pm on Monday when he was struck by a vehicle making a turn at College and the Hanlon. The driver stopped briefly to check on him and then continued on their way, and the teen ended up getting medical attention for a minor injury later that day. If you have any information about this case, email Constable Michael Powell of the Traffic Unit at mpowell [at] guelphpolice.ca.

Baseball equipment, golf clubs and a bicycle with a total value of approximately $4,000 were stolen from a garage in the area of Gordon and Hands sometime overnight Monday. The theft was discovered Tuesday morning. If you have any information, call Special Constable Tom Randell at 519-824-1212, ext. 7194, or email him at trandell [at] guelphpolice.ca

A 24-year-old Brampton man, who had already been arrested by Guelph Police for an attempt to steal a catalytic converter from a home on Victoria North earlier this month, has been charge in another theft and attempted theft at a townhouse complex less than a kilometre away from the original scene of the crime. The suspect is facing additional charges, including two counts of mischief, theft under $5,000, attempt theft under $5,000 and failing to comply with a release order.

A 56-year-old Mississauga man was charged with speeding and stunt driving, and his driver’s licence was suspended for 30 days after being caught Tuesday afternoon doing 93 kilometres per hour in a 50 zone in the area of Willow and Guelph Street.

A 21-year-old Mississauga man was charged with speeding and stunt driving, plus his licence was suspended for 30 days and his vehicle was impounded for 14 days after driving 76 kilometres per hour above the speed limit in his work van on Maltby Road.

A 24-year-old Burlington man was charged with impaired driving and failing to stop for a red light last Friday night after he was showing impairment by, you guessed it, running a red light in the area of Edinburgh and Water.

A 46-year-old Guelph man was charged with impaired driving last Saturday morning after he was seen by police getting into his car with open alcohol in his hand in the area of Scottsdale and Stone.

A 43-year-old Toronto woman was arrested for impaired driving Sunday morning after running a red light and hitting another car at the Speedvale and Victoria intersection.

A 35-year-old Guelph man was charged with impaired driving and dangerous driving early last Sunday morning after they were caught on police radar doing 88 kilometres per hour in a 50 zone on Wellington West. After speeding away from police, the vehicle was found abandoned on Nottingham, and the driver was found and arrested nearby.

A 29-year-old Guelph man was charged with trespassing by night, mischief under $5,000 and possessing a weapon for a dangerous purpose after a dispute at a home near the downtown core Monday night. A man walking his dog was followed home by another man he didn’t know who caused damage to the home, wrote some message in a black marker on the porch and was caught by police about to throw a large rock at the house.