You may not be aware, but Elections Canada is presently in the process of reviewing district boundaries across the country. Since 2004, Guelph has been a riding on its own, but as we all know Guelph is a rapidly growing city, and a single MP can only represent so many people. So will this review affect our Guelph togetherness going forward? It looks like the answer is yes.

As you can see in the map above, the proposed new boundaries for Guelph will divide the city with an L-shaped border line. All areas in Guelph south of Wellington Street to the Hanlon and then south of Hanlon Creek to Arkell Road will be part of a new ward called Wellington-Halton. That riding will also include Erin, parts of Halton Hills to the city limits of Georgetown, and parts of Milton north of Side Road #15 along with the townships of Centre Wellington, East Garafraxa, Guelph/Eramosa and Puslinch.

You can see the proposed map for Wellington-Halton below: 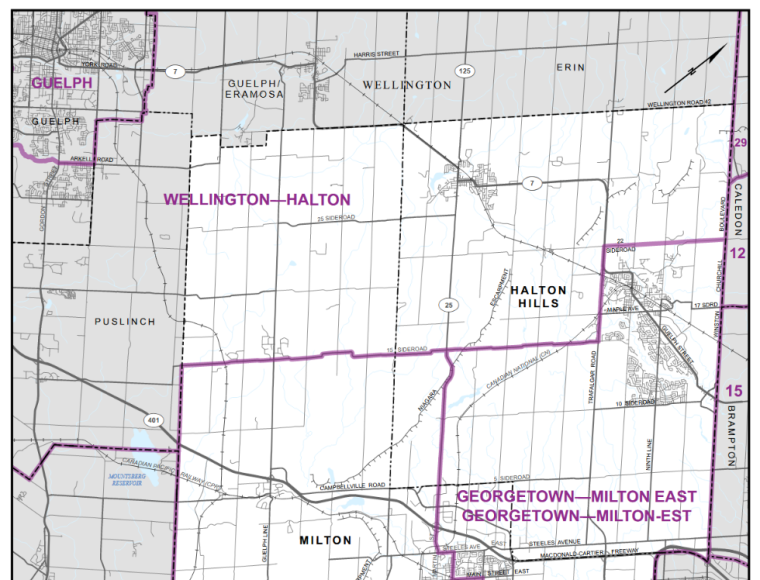 “In exercising its mandate under the Electoral Boundaries Readjustment Act and given the allocation of one additional district to Ontario, the Commission found it necessary to propose many new electoral boundaries to correct wide variations in voter equality that have emerged across the province over the past decade due to population change,” said the Honourable Justice Lynne C. Leitch, chair of the Federal Electoral Boundaries Commission for Ontario statement.

The addition of one new seat to the Ontario has caused a bit of a shake-up in a lot of the different ridings in our area. With much of the rest of Wellington-Halton Hills joining the new riding of Wellington-Halton, Georgetown will be joining the new riding of Georgetown-Milton East. Like Guelph, Milton is currently it’s own riding, but now it will be three with Burlington-Milton West being the third.

Up the road in Waterloo Region, the five ridings will be rejiggered slightly with the biggest change being the redrawn and renamed Kitchener South-North Dumfries. This would be the riding currently known as Kitchener-South Hespler, but it will now include some of the north parts of Cambridge.

You can all the maps for Ontario, and the full proposal, on the commission’s website here.

If you have some feedback for the commission, or if you have a concern, there will be a virtual information sessions for people in Halton, Guelph and Wellington; Brampton, Caledon and Dufferin; and Mississauga on Tuesday September 27 at 6:30 pm. To get access to the hearing, you have to complete the Public Hearing Participation Form and submit it by September 25.

If you would rather just leave written remarks, you can email them to ON [at] redecoupage-federal-redistribution.ca, or you can send it through old fashioned snail mail to the following address: