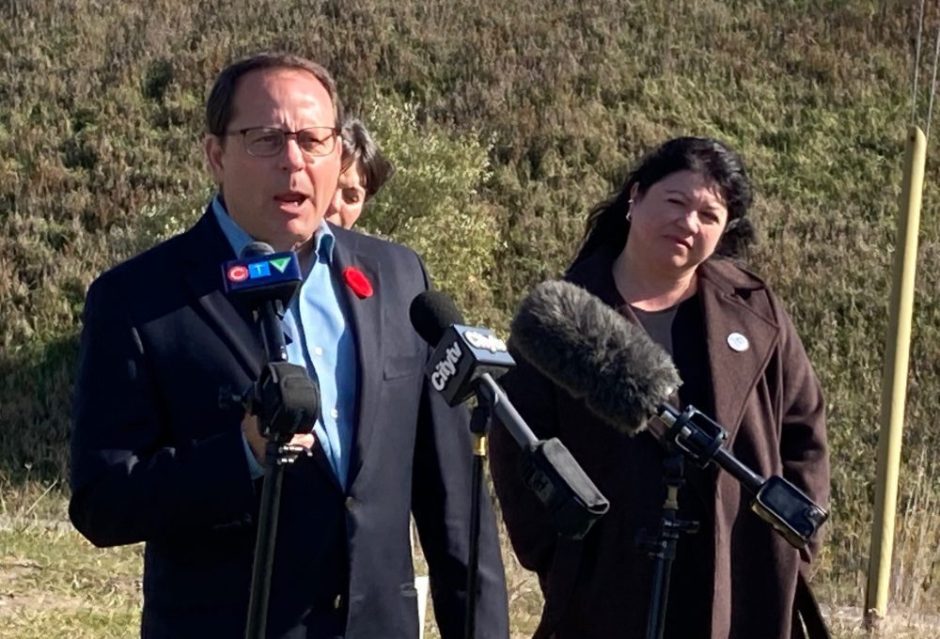 In an announcement in Caledon on Wednesday, Premier Doug Ford lent his support, and that of the Government of Ontario, to the Highway #413 project. The controversial project needs all the friends it can get, because environmentalists, local municipalities, and all provincial opposition parties have lined up against #413, and one of those opponents, Guelph MPP Mike Schriener, was also in Caledon Wednesday for an announcement of his own.

“Let me be clear: Highway 413 is a climate and financial disaster. It needs to be cancelled,” said Schreiner, who, as you may know, is also the Green Party of Ontario leader. “Instead of pumping billions into more highways and urban sprawl, let’s invest in livable and affordable communities connected by transit that protect nature and crush climate pollution.”

Schreiner was joined by two other area Green politicians, Ontario Green candidate for Dufferin-Caledon Laura Campbell, and Jenni Le Forestier, who ran for the Green Party of Canada in the recent Federal Election. Everyone at the media availability agreed that this is not the project that people in the area are looking for, and the environmental issues that Highway #413 will create are especially unappealing.

“We need to protect nature and build a more livable future for our kids,” Campbell said. “That’s what I hear from the local people in this community. But Doug Ford would rather pave over wetlands and farmland and increase emissions than take meaningful climate action.”

“Doug Ford is making decisions that will benefit his deep-pocketed friends instead of investing in the people of Dufferin-Caledon,” Le Forestier added. “He’s putting profits before people and the planet. It’s unacceptable.”

Premier Ford respectfully disagrees. “With Halton, Peel and York regions all set to grow at incredible speed, our government is saying yes to building the roads and highways that will keep these communities moving,” he said in a statement Wednesday. “Highway 413 will create thousands of jobs while saving commuters hours of gridlock every day. This project is a key part of our plan that’s building Ontario.”

The plan, according to the activist group Environmental Defence, will cost billions of dollars, pave over 400 acres of the Greenbelt, endanger Indigenous sites and sensitive wetlands, create 17 million tonnes of greenhouse gas emissions by 2050, and will only save commuters between 30 and 60 seconds on their average commute.

On top of that, there’s no indication about when construction will begin on 413, and the Federal Environment Ministry announced earlier this year that they’re going to carry out an environmental assessment on the project before it will be allowed to proceed, a process that could take years.

Back at Wednesday’s announcement, Transportation Minister Caroline Mulroney said that the government will be doing more public engagement about Highway #413 starting next month, but municipal councils up and down the proposed route including Toronto, Mississauga, Brampton, Vaughan and the Region of Peel have all formally opposed the project with only York Region and Caledon throwing their support behind it.

Both the NDP and the Liberals have said they’ll scrap plans for #413 if they form government after next year’s election.

“It’s an absolute critical highway that we need to build for the influx of immigration that we’re going to see,” Ford said at the media event Wednesday. “What we’ve heard is we’re in desperate need of this highway and we’re going to build it.”