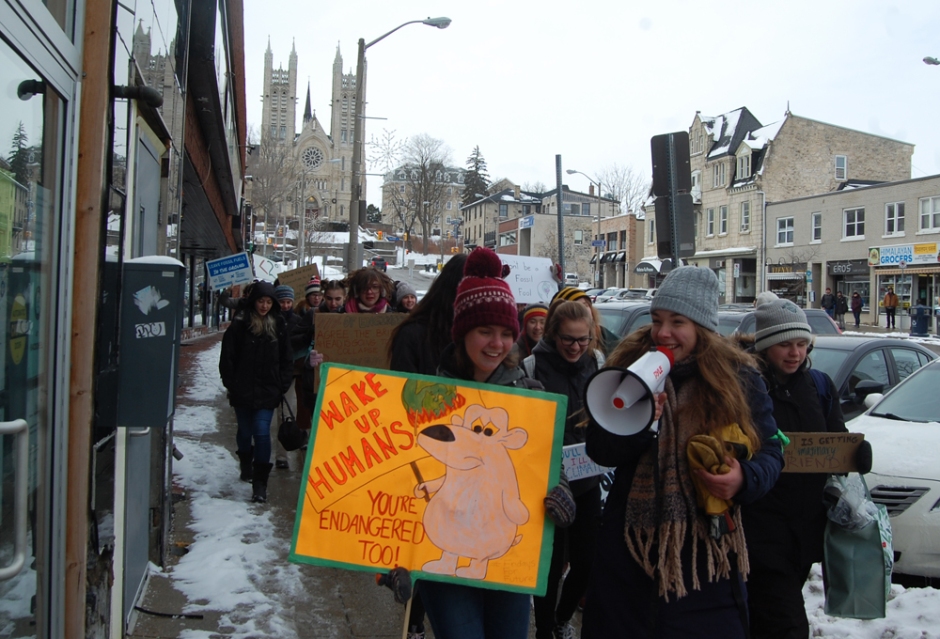 A proud Guelph tradition returns this Thursday when several local groups will host a climate strike at noon in St. George’s Square. In the wake of the Intergovernmental Panel on Climate Change’s recent, and damning, report about the out-of-control warming of the planet, the consortium has some very important demands with local and national reach.

First, the details of the strike. It will take place in St. George’s Square on Thursday August 19th at Noon, and will feature speakers from the organizing groups including Greenhouse Guelph, Fridays for Future Guelph, the Wellington Water Watchers, and eMERGE. Organizers are asking people to follow typical COVID-19 protocols like masking, self-screening, and physical distancing; hand sanitizer and extra masks will be available too.

For updates about the protest, including what to do in case of inclement weather, you are being asked to follow @greenhouseguelph and @fridaysforfutureguelph on Instagram.

Now, the goals. There are five things that the group would like to see come out of the protest, including a call for new climate education that also focuses on the social, humanitarian, and mental health impacts of climate change, and new climate targets for the City of Guelph saying that the current deadline for the City to reach net zero by 2050 is “way too late.”

The group would also like to see Canada’s big banks and the the Ontario Teachers’ Pension Plan to divest from fossil fuels, and praised the board of the Guelph Community Foundation for voting to divest their organization from fossil fuels earlier this summer. They’re also asking the Provincial government to refuse Blue Triton’s (formally Nestlé’s) Aberfoyle water-bottling operation, and “return the water to public stewardship, with the Aberfoyle water being returned to the stewardship of the Six Nations of the Grand River.”

The protest will also demand the “immediate protection of BC’s most endangered ancient forests, the development of a science-based plan to protect old-growth, and the support of Indigenous-led protected areas, sustainable economies, and second-growth forestry jobs.” For months now, there has been a protest and blockade in the Fairy Creek Watershed area in British Columbia to stop logging in the old growth forest there. The RCMP have been repeatedly criticized for the heavy-handed tactics they’ve been using to enforce court injunctions to stop the protests.

It looks like there’s been a kind of resurgent in climate action in Guelph lately. Late last month, members of 350.org, along with now-Federal Green Party candidate Michelle Bowman, met outside the constituency office of Guelph MP Lloyd Longfield to get his support for “an immediate moratorium on new fossil fuel approvals and a freeze on all fossil fuel projects under construction — including the Trans Mountain pipeline,” and “Just Transition legislation to support workers and communities, especially Indigenous and remote communities as we move towards a 100% renewable energy future.”

The view of the event is below: