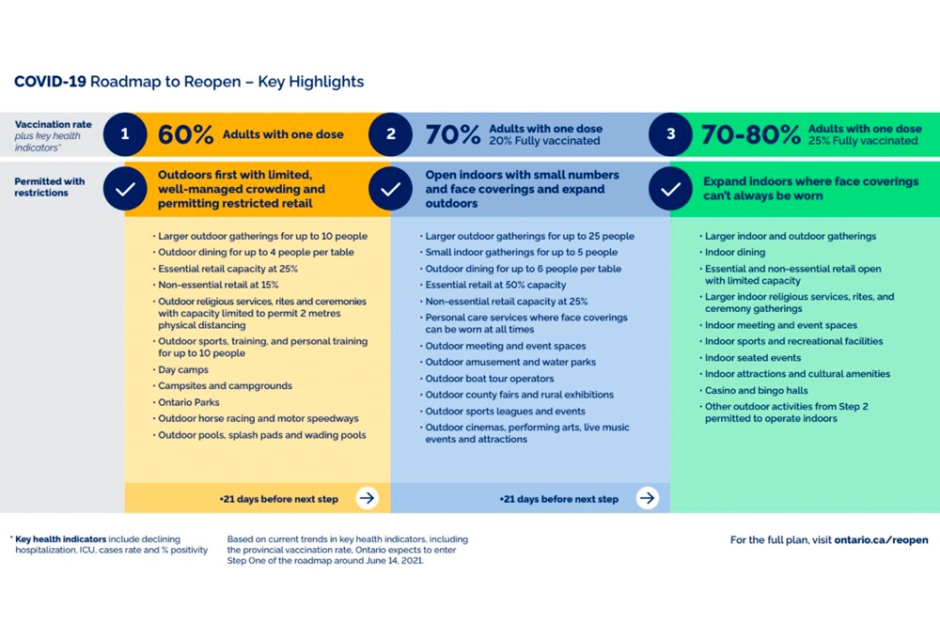 Good news has been sometimes hard to come by in the last 15 months, but there was definitely some good news on Friday as the Government of Ontario announced that stage 3 is beginning early. Although the original intent was to move to the third and final phase of the economic re-opening on July 21, positive developments on both lower case counts and high vaccination rates means an early jump on stage 3.

“Thanks to the tireless efforts of our frontline heroes, and the ongoing commitment of Ontarians to get vaccinated, we have surpassed the targets we set in order to enter Step Three of our Roadmap,” said Premier Doug Ford in a statement.

“Ontario has continued to see improvements in key health indicators, allowing the province to move to Step Three of the Roadmap and safely resume more of the activities we’ve missed,” added Minister of Health Christine Elliott.

To re-open in stage 3, it was required that 70 to 80 per cent of Ontarians to have received one dose of a COVID-19 vaccine, and 25 per cent to be fully vaccinated. According to Canada’s vaccine tracker, 68.3 per cent of Ontario residents have had one shot, while 44 per cent have gotten two. Nearly 20 million vaccine doses have been distributed in the process so far.

Still, the re-opening plans do not come without a warning.

“The pandemic is not over and we must all remain vigilant and continue following the measures and advice in place, as the Delta variant continues to pose a threat to public health,” said Chief Medical Officer of Health Dr. Kieran Moore.

At a media briefing Friday, Moore added that despite the re-opening, there’s still a push on to get vaccines into arms, and that people will still need to exercise caution until everyone is full vaccinated. “My part in trying to reduce the spread of this to vulnerable members of our community that can’t get vaccinated or who are immune-suppressed, at a personal level, will be to continue to wear the masks throughout the fall until we get real, clear guidance that we’ve limited the spread of COVID-19,” he said.

On Thursday, Wellington-Dufferin-Guelph Public Health announced that they’ve updated the vaccine appointment booking system so that residents will not longer have to pre-register before getting a vaccine appointment. If you still need to get your first shot of a COVID vaccine you can report to any public health clinic now, tell them you’re there for your first shot, and they will move you to the font of the line. For those needing a second shot, you can now book your appointment directly using public health’s ebooking site.

“We can now see the impact of this virus on those who are unvaccinated or partially vaccinated. If you have not had both of your doses of a COVID-19 vaccine, you are at risk,” said Medical Officer of Health Dr. Nicola Mercer in a statement. “Vaccines are truly the most effective way for us to protect each other and get back to normal and stay there. Please book your appointment as soon as possible so we can vaccinate our community as quickly as possible.”

In terms of the local vaccine picture, 78.2 per cent of residents age 12 and over in Wellington, Dufferin, and Guelph have now received one dose of a vaccine, while 48.9 per cent have received both shots. There are now jut 49 active cases of COVID-19 in the region as of Friday.

Up the road in Waterloo Region, it was announced Thursday that they will be moving into stage 2 on Monday, two week after the rest of the province due to the runaway number of new cases be generated largely because of the Delta variant. For the last several weeks, Waterloo Region has outpaced areas in Toronto and the GTA in terms of new daily cases.

“Our community has made a remarkable effort to protect each other. We’re working together to push back against the Delta variant, stabilizing our case rates and hospitalizations, while increasing vaccination rates,” said Medical Officer of Health Dr. Hsiu-Li Wang in a statement. “Continuing to build on this momentum puts Waterloo Region on track not only to move to Step 2 on Monday but will help keep us on track for Step 3.”

The news about stage 3 broke while Wang was in the middle of giving her weekly media briefing about COVID. Although she was caught off guard by the announcement, Wang said that it is her expectation that Waterloo Region will be moving into stage 3 with the rest of Ontario next Friday.

“The plan is to move along with the province going forward,” Wang said. “The metrics that I was looking for, for us to start moving forward, were the stabilization of our situation and rising vaccination rates and that’s what we see now. […] We will continue to assess but the plan is to continue to move forward.”