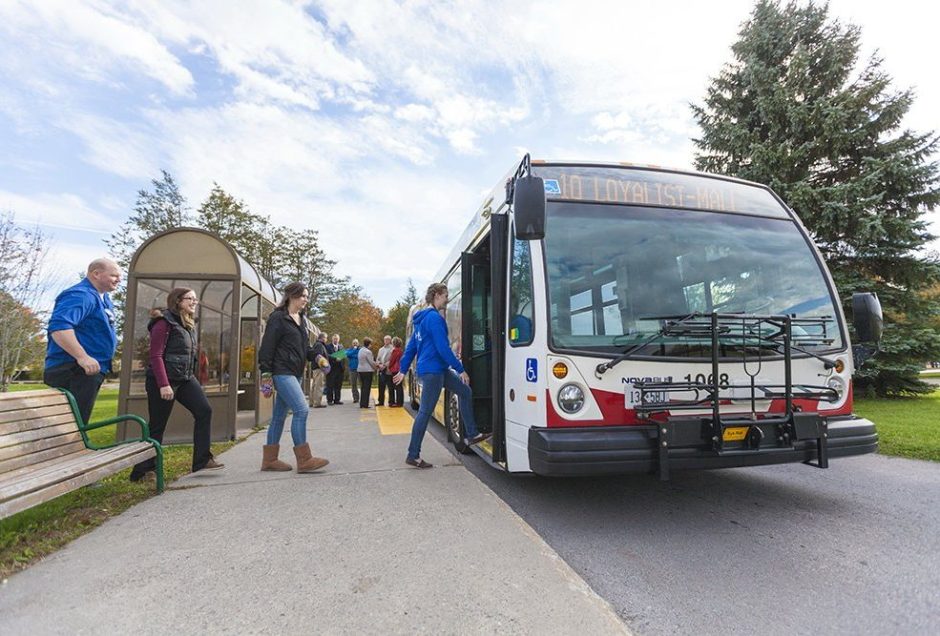 On-demand transit is coming to Guelph this spring, and that may sound scary for people who take transit because they’re not generally predisposed to accepting change. On Tuesday night, the Transit Action Alliance of Guelph (TAAG) hosted a webinar with Paul Buck, the Manager of Transit Operations for the City Belleville. His town has instituted a transit on-demand option, and he thinks it works pretty well.

“It has been quite the project launching on-demand transit, and the public response was far better than we’ve ever anticipated. It’s really been pretty great,” Buck said to the over a dozen people taking part in TAAG’s webinar.

Long story short, Belleville was able to develop an on-demand transit option, along with an accompanying app, thanks to the Canadian Urban Transit Research and Innovation Consortium (CUTRIC) arranging a “marriage” between their transit service, and the Toronto-based software company Pantonium.

Belleville needed a late night bus service because companies in the city’s northwest industrial area needed to get their workers on transit so they could make their shifts during hours Transit wasn’t running. Previous experiments using special one-hour loops, a variation on conventional bus service, was lacking because the service was slow and prone to delays, so the need for a late night service and the support of some of Belleville’s major employers offered the right opportunity to try on-demand transit.

“As advanced as I thought we were, or as progressive as I thought we were, I still had that transit mentality that we’re gonna launch slow, and we’d build it over time,” Buck explained. “The public had been waiting for something like this for a long time, it fit into what they wanted to do, and they immediately showed us how important it was to them.

“In the first 24 hours we had over 200 registered riders for the service,” Buck added. “Our ridership increased by over 500 trips in the first few weeks after we launched, and the riders just kept coming.”

In practical terms, Buck noted that a typical trip from a residential area in one end of town to a major retail plaza in another end of town would take two-and-a-half hours there and back considering just 15 minutes of shopping, while that same only takes 57 minutes using on-demand service. Using a private automobile the same trip takes 35 minutes taking into account that 15 minutes for shopping, and a 10-minute drive to and from the store, so not only does on-demand transit shave off an extra 90-minutes on the transit trip, it’s just 22 minutes longer than making the trip by car.

Now this may not be exactly analogous to the Guelph situation. Belleville has a little over a third of the number of people than Guelph, and in terms of coverage per square kilometre, Belleville is about half the size of Guelph.

Still, Guelph Transit users will be familiar with the time disparagement between a trip across Guelph in a car, and a trip across Guelph on the bus. Like Belleville, Guelph also has industrial areas that struggle to get shift workers to the job when transit service is unavailable, and they have an active student population thanks to Loyalist College. Plus, Buck said that on-demand transit is easily adaptable to the size and needs of a city.

“As the operator you have full control over how much service you provide, how many buses you utilize, and the hours of operation that you’re running,” Buck said adding that the only new capital demand was the Samsung tablet installed on every bus, and the license for the software on each of those tablets.

Currently, Belleville Transit runs five on-demand buses, but they have an eye towards scaling up due to its success.

“We can operate with an on-demand service  doing a combined mobility and conventional service, and bring all those residents to the hub to transfer to the fixed road service and carry on their way,” Buck explained. “It allows us to cover more ground with less equipment, and it’s a lot more convenient for the customer because they’re not waiting for a bus on our schedule. They get picked up on their own.”

Buck said that Belleville Transit has seen a 300 per cent increase in ridership since implementing the on-demand option, which practically means they’ve seen six boardings an hour jump to 13 boardings per hour.

A somewhat skeptical audience had some questions for Buck including a query about the average wait time of nine minutes for a bus. “Even when we were running [transit] as a full, regular on-demand service through the first COVID-19 shut down, I think our maximum wait time stretched up to about 17 minutes,” Buck said.

Does on-demand transit ever get so busy that commuters get left behind?

“We’ve had very, very few instances of unavailable rides because what the system does is take that booking, and is constantly looking to make trips as efficient as possible,” Buck said. “If we have an evening where there’s an event in town that we weren’t aware of, which doesn’t happen very often, or some significant event occurs where ridership is more than we anticipate, we may get into a situation where we miss people, but it’s very rare.”

Another concern is access. Not everyone has a smart phone, and not everyone has data on their smart phone, and Buck said that was a concern when they launched on-demand transit, which is why there’s also an option for people to phone in their bus request. Some large employers also have tablets set up in their staff break rooms that can allow users to access the system and request a bus.

“Drivers are also able to do an ad hoc pick-up, which is a little bit riskier if you’re in an area where there’s not a lot of ridership, but if you’re in an area where we regularly see service pick-up, definitely,” Buck said. “The driver can book a passenger literally in seconds. They just climb on the bus, the system takes that call, puts it into the rotation, and then provides the drop-off time so that nobody gets left behind.”

The City of Guelph is implementing on-demand transit for three routes, the two community bus routes and the #16 Southgate, starting on May 2.

Photo Courtesy of the City of Belleville’s Twitter page.

***Correction: The start date for on-demand transit was misidentified as May 1 in the original version of this article.