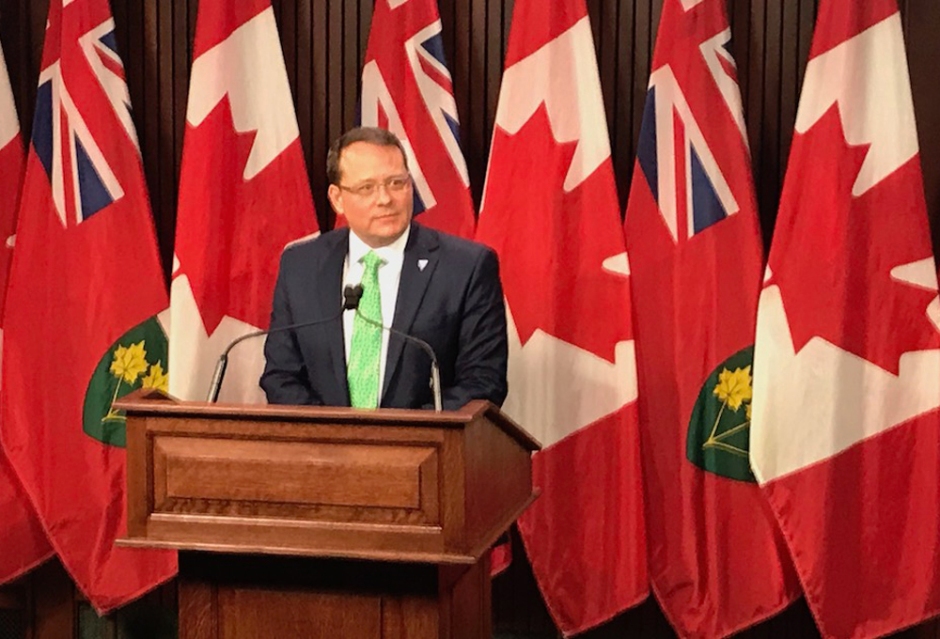 Guelph MPP and Green Party of Ontario leader Mike Schreiner held a media availability at Queen’s Park Monday morning to talk about his priorities before the Ontario Legislature holds its first sitting since April on Tuesday. In short, Schreiner has two priorities, the first is the situation in long term care homes, and the second is the outstanding need for rent relief for the province’s small businesses.

“So many long term care facilities and nursing homes have had to bear the brunt of this crisis, and I just want to say how much I am committed to ensuring that we overhaul the way in which we care for our elders,” Schreiner said. “They deserve more dignity than they’ve received in long term care.”

In an email comment to Guelph Politico later on Monday, Schreiner said that he joins fellow opposition leaders Andrea Horwath and Steven Del Duca in calling for a public inquiry into the spread of COVID-19 in long term care homes. At the same time tough, the Guelph MPP said that the need for the inquiry should not stop the government from making immediate changes in the short-term.

“I support the call for an independent public inquiry, but it must be transparent and independent rather than a closed-door review dominated by government members or reporting exclusively to Cabinet,” Schreiner explained.

“The review should not preclude the government from making immediate changes that would have prevented this tragedy, including higher minimum standards of care and staff-to-resident ratios, additional RNs and better compensation for front-line staff,” he added. “We need to move to a model that puts elder care ahead of cost savings.”

In terms of rent relief, Schreiner repeated his call to the Provincial government to help individual, families, and especially commercial businesses who are “starting to see some light at the end of the tunnel” now that some COVID-19 restrictions have started to be loosened.

“I’m deeply worried that our downtowns and our neighbourhoods will be ghost towns if the government does not act now to address the crisis that many local small businesses are facing,” Schreiner explained. “Many of them are telling me, and they’re telling business organizations, that they simply cannot afford to stay open if they don’t get rent relief.”

Last month, Prime Minister Justin Trudeau announced a cost sharing plan that would allow an equal four-way split in rents payments between the Federal government, the Provincial government, the landlord, and the tenant. Schreiner cited concerns from the Canadian Federation of Independent Business (CFIB) that the program may be “too complicated and too reliant on landlords to administer.”

“I’m calling on the Premier to ban commercial rent evictions business organizations, business owners and people are calling for this because they want their downtown’s to remain vital and vibrant moving forward,” Schreiner added. “I’m calling on the Premier to change the rules that they’ve worked out with the Federal government on the commercial rent relief program to mandate the landlords participate in the program.”

“I can tell you that the primary anxiety for business owners beyond the anxiety,of making sure their loved ones are safe, is the concern they have around being able to cover rent,” Schreiner added saying that’s the message he’s heard from his constituents in Guelph, from individual business owners, to the Chamber of Commerce and the Downtown Guelph Business Association.

“I was talking to a woman who owns a restaurant, and she talked about the thousands of dollars that have gone into buying the commercial kitchen equipment to run that restaurant,” Schreiner explained. “To be potentially locked out of that space is not only catastrophic from the perspective of being a business owner, and what it means for her and her employees, but there’s also the additional financial hardship on top of not having regular income from normal business operations.”

On the same morning that the Financial Accountability Officer said that Ontario was facing a $41 billion deficit for the 2020/2021 fiscal year due to the effects of the pandemic. Schreiner argued that rent relief for commercial businesses is not only the right thing to do, but it’s an act of economic stimulus as well.

Speaking of financial holes, Schreiner also said he’s lending his support to Guelph Mayor Cam Guthrie who, as the chair of the Large Urban Mayor’s Caucus of Ontario (LUMCO), is calling for financial assistance from higher levels of government to address municipal deficits resulting from the effects of COVID-19.

“I have been in close contact with Mayor Guthrie, and I sent a letter to the Premier last week, endorsing their requests, as well as echoing the FCM request of the federal government,” Schreiner said. “Municipalities are shouldering additional costs during this crisis, while grappling with declining revenues. I sent a series of recommendations to the government for a comprehensive Municipal Response Plan.

The province should re-absorb some of the costs that were erroneously downloaded onto cities, while covering additional operating costs for transit and long-term care homes,” he added.