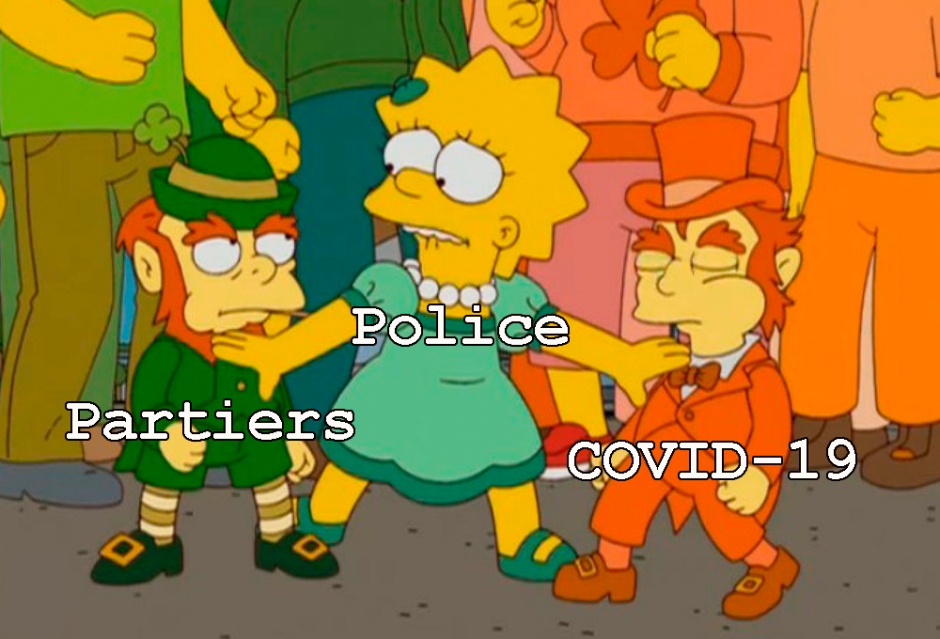 Guelph Police Service took an unusual step for a post-St. Patrick’s Day report and thanked the public for being dedicated enough to stop the spread of COVID-19 by not holding big outdoor gatherings. According to the daily report from Guelph Police, they answered 40 per cent fewer calls yesterday over St. Patrick’s Day 2019.

There were concerns in advance of St. Patrick’s Day that despite the warnings about social distancing and limiting contact with large groups that big parties would take place regardless.  University of Guelph President Franco Vaccarino made a personal plea to students to let the occasion pass, and keep up self-isolation measures.

“This is an unprecedented situation that calls on each of us to make changes to our typical routines. Together we can show our support and care for each other and our community,” Vaccarino said.

Another big point of concern was taken off the table late Monday night when Partytown announced that they were cancelling their St. Patrick’s Day festivities. Partytown, which covers the Palace, Taphouse, Trapper’s Alley, and Tabu, is one of the biggest night spots in the city, and is highly popular with U of G students. After the Medical Officer of Health for Ontario suggested keeping gatherings to 50 people or under on Monday night, Partytown posted this on Facebook:

Concerns were even more dire in Waterloo where an annual unsanctioned street party attracts tens of thousands of people from not just nearby University of Waterloo and Wilfred Laurier University, but from schools all around Ontario. However, instead of the expected 33,000 people or more, the streets of Ezra Avenue were a proverbial ghost town as students seemed to heed the warnings.

“We’ve been working very hard over the last number of days, and weeks and in fact months to ensure a safe festivities. But in the last 7 days much has changed. We’re in uncharted territory, unprecedented times and what we saw today was an unprecedented community response.”

Larkin, Waterloo Region Chair Karen Redman, and Waterloo Mayor Dave Jaworsky all made emphatic pleas on Monday for everyone to stay away from Ezra Avenue as Waterloo Region Police were prepared to break up any crowd that might materialize.

EZRA AVE IS DONE.
Attendance is shameful and demonstrates how your smarts and studies are no indication that you should be employed.
Why toss away your smarts and future?
RT with your thoughts. This is the year to end this dangerous event.

While all was well in our area, the same could not be said at Queen’s University in Kingston. Global News reported from the scene where one reveler said that he knew attending St. Patrick’s Day  parties would help spread the virus, and another said that she wasn’t concerns because she’s young and “takes supplements.”