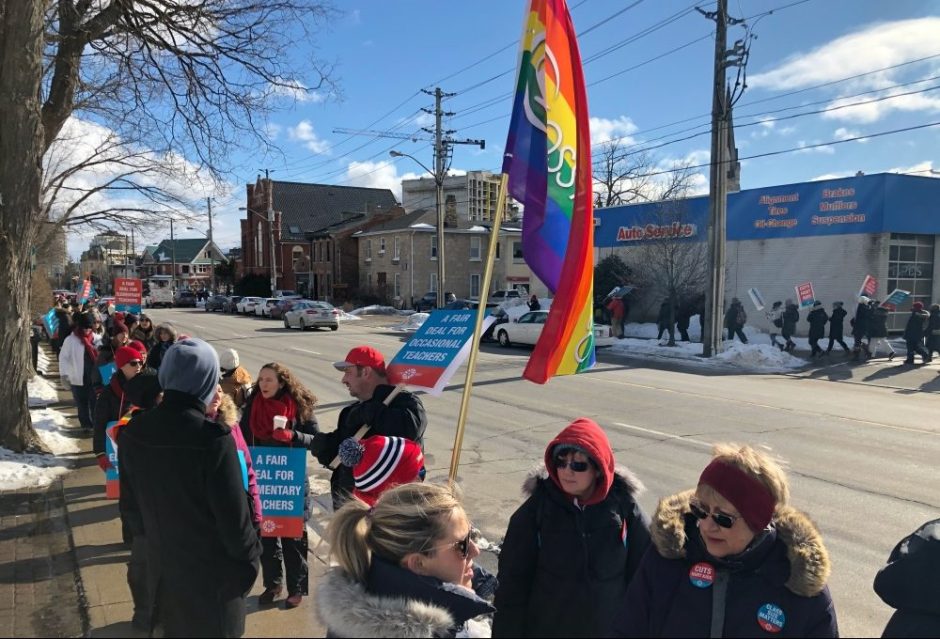 After weeks of separate, rotating one-day strike actions, Ontario’s four teachers’ unions are now combining their efforts for a one-day, province-wide walkout that will affect all schools – elementary, high, Catholic and French – and about two million students in total. For the first time in over 20 years, schools in Ontario will be empty because of labour action by teachers.

“Educators in every school board will not stay silent as the Ford government proceeds to decimate our publicly funded education system,” said  Elementary Teachers’ Federation of Ontario (ETFO) president Sam Hammond in a statement. “Our unions and members helped build Ontario’s world-class education system. By not seriously addressing the issues critical to students and student learning, the Ford government has made a sham of contract talks over the last seven months.”

ETFO will be joining members of the Association des enseignantes et des enseignants franco-ontariens (AEFO), the Ontario English Catholic Teachers’ Association (OECTA) and the Ontario Secondary School Teachers’ Federation (OSSTF) in striking on Friday February 21. Nearly 200,000 teachers will be on picket lines in 72 school boards, which will affect nearly 5,000 schools.

Education Minister Stephen Lecce took the news well. “Our focus is on keeping students in class, as they deserve better. That is why I am calling on the teachers’ union leaders to accept private mediation today and end this needless escalation,” he said in a statement.

“Parents are losing patience with the disruption in their lives, the inconsistency in their children’s education, and the financial impact of scrambling for child care,” Lecce added.

A new poll released by the OSSTF, which they commissioned through Strategic Communications, tells a different story though. Looking at 33 ridings won by the Progressive Conservatives in 2018 that were previously held by a different party, 53 per cent of respondents said that they felt the government is poor job on handling education; only 11 per cent said it was excellent.

“It is now evident that the Ford government’s agenda is entirely ideological and not at all concerned with providing quality education,” said OSSTF president Harvey Bischof. “They are pulling resources out of the public education system and, with schemes like mandatory e-learning, laying the groundwork for private interests to profit from our students’ education. We are heartened that so many parents are standing with us against the dismantling of Ontario’s public education system.”

“This dispute will not be resolved with more spin from the Minister,” said Guelph MPP Mike Schreiner lending his support to the teachers. “Educators and parents will not accept a plan that increases class sizes and cuts per-student funding. Ask most teachers and they’ll tell you that Ford is under-funding our schools.”

Guelph teachers have repeatedly said that this is the goal of their labour disruption.

“We want to keep the world-class education system that we have here in Ontario,” said Jennifer Hesch, vice-president of the Upper Grand ETFO at a picket last month. “We have high graduation rates, we have high scores in math and language, and we have have great supports, or we did until they cut all the funding. Parents see the damage that’s being done, and it’s only going to continue to get worse as they try and privatize the sell-off of education to the highest bidder.”

“Increases in class sizes are already leading to canceled programs and lack of services for students with special needs,” Schreiner added. “Ending this standoff falls in Ford’s lap”

Although there were some new negotiating sessions with both the OECTA and the ETFO in last couple of weeks, those meetings resulted in no new progress on reaching a settlement. Lecce’s statements have repeatedly inferred that the strikes are about the teachers’ demands for more money, but the ETFO says that they’ve collectively lost 2.5 per cent in pay since the rotating strikes has started.

Between this one-day strike and the observance of Family Day, Ontario’s schools will only be open for three days next week. The City of Guelph has been running day camps for children 13 years old and under who are affected by the strikes, but nothing has yet been announced for Febraury 21.