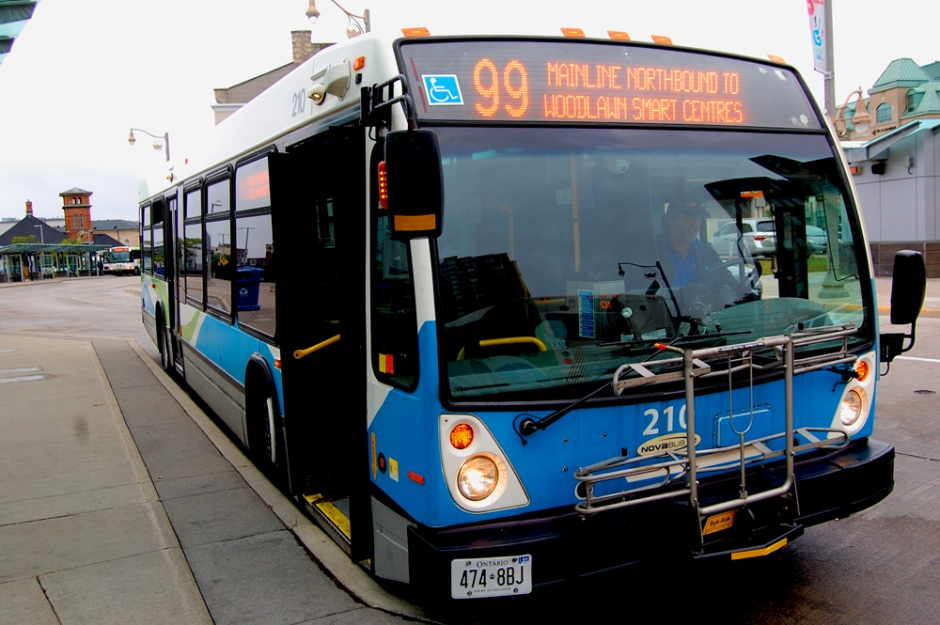 On the best of days, the city’s transit system is a tough thing to manage, and in Guelph all transit matters come to the desk of General Manager Robin Gerus. On this week’s second installment of a Politicast transit double-bill, we actually go to that desk and ask Gerus directly about the present concerns and challenges of Guelph Transit.

Earlier this week, the Transit Action Alliance of Guelph, or TAAG, talked to the podcast about their feelings about the current state of transit, and the follow-up of the completion of the Service Review. Now it’s Gerus’ turn. Everything that’s going on from the wrap up of the Service Review, to the beginning of a route and schedule review, and the push/pull of expanding transit service with limited resources were among the topics of discussion.

Now this isn’t the first time that the podcast has gone to the Watson Road office of the Transit General Manager. Way back in episode #60, we heard from then-new Transit manager Mike Spicer, who came to the job with a lot of optimism and ready to seize the opportunity to make Guelph Transit better. He left a little over a year later, and Gerus inherited the position and a tremendous work load.

As you’ll hear, from his point of view, why Gerus says his job now is to stay the course, and not transform Guelph Transit as he sees fit.

Also in this special edition of the podcast you’ll hear Gerus talk about his transition to manager of Guelph Transit, and why he’s trying not to rock the boat too much. You’ll also hear his own feedback from the Service Review, and what we’re to make of the proposed community bus expansion. In terms of the bigger picture, Gerus will talk about whether Transit has the ability to manage all it’s long term projects at once, and whether it can take three to five years to implement all of the reviews recommendations. And we’ll discuss Guelph’s traffic issues, and what comes next for the city’s transit system.

So let’s hear about transit, from the boss of transit, on this week’s second edition of the Guelph Politicast!

You can follow along with any new Transit developments here on Politico, where we regularly cover transit issues, or you can visit Transit’s website, Facebook page or Twitter feed for updated information from Guelph Transit itself.

Look who was back in #Guelph today: Ontario Liberal leader @stevendelduca. He has beef with the Ford government, and an article will be coming soon to Guelph Politico. Stay tuned.
Happening soon: @mayorcamguthrie and @wdgpublichealth officials will discuss the conversion of this hockey pad in the West End Rec Centre into a vaccination clinic with the media.
So a quick update about the anti-mask event in #downtownguelph today: half the announced speakers were no shows, but Death stopped by for a minute. Local angle saw the mayor and the CAO get accused of being pawns of the UN, but it was as all par for the course. Working on a Politico post about it all.
Happening now: an anti-mask gathering is warming with shouts about hugs and smiles in downtown Guelph. Stay tuned for more.
Looking for a good cause this #givingtuesday, why not local journalism? https://guelphpolitico.ca/2020/12/01/please-support-local-news-and-journalism/
Happening now: #Guelph high school students are setting up rows of empty shoes to protest (the lack of) climate action at Guelph City Hall.