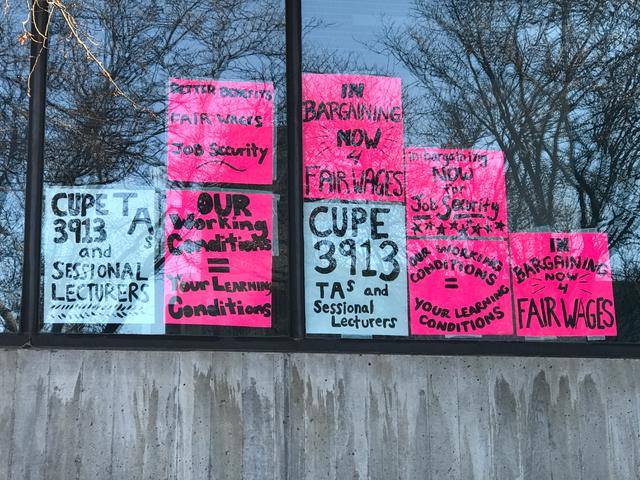 All signs pointed to dicey first day back from Reading Week for the students at the University of Guelph, but a deal was struck last night to keep teaching assistants and sessionals working on through the rest of the semester.

According to both the University administration and the Canadian Union of Public Employees Local 3913, they’ve reached a tentative agreement averting a strike that was scheduled to begin on Monday at 12:01 am. A strike deadline for February 27 was set at a December meeting of CUPE with 69 per cent of the union voting in favour, and a “No Board” report was filed with the Ministry of Labour on February 6, indicating that the conciliation process had failed. Even Guelph Transit was proceeding like a strike was all but inevitable.

Meanwhile, there were accusations that the University wasn’t acting in good faith. A Twitter post on January 12, said that representatives of the University went into the CUPE office while it was empty and removed several posters from the window. “We put them in the window so that students could see them from outside. No one had a problem with them for a month, but the sentiment appears to have changed now that we are nearing conciliation,” said Ashley Wilson, president of CUPE 3913, in a news release. “I can’t believe that the university would do this, the posters simply state what we are asking for in bargaining: tuition relief, job security, benefits.”

CUPE’s conditions for a new contract included the usual increases in wages and benefits, but also a more formal hiring process for TAs, tuition relief, a cap on sessional work assignments and other job specific tasks. No details about the agreement reached between the U of G and CUPE will be released until both sides have ratified it. CUPE members will be doing an online vote to ratify, while the Board of Governors will vote on it at their next meeting.

In the meantime, this is not the end of the U of G’s labour concerns. This past week, CUPE Local 1334 filed their own “No Board” Report with the Ministry, starting a countdown to possible strike or lockout for over 200 trades, maintenance and service workers at the University of Guelph. “Filing the no board was necessary to insure progress continues to be made within an established, reasonable timeframe” said Janice Folk-Dawson, President of Local 1334, in a press release.

As to 1334’s demands, they’re primarily concerned with the contracting out of union jobs, meaning that they’re hoping to keep jobs under the University rather than seeing janitors and trades people be brought in on a precarious or contractual basis. “These issues have been on going for well over a year. 1334 had served notice to bargain last February but the University did not meet with us until November” Folk-Dawson said. “The entire campus has been subject to reduced levels of service due to unfilled positions and the cloud of uncertainty in the air has added to our workplace challenges.”

Here’s a video from last February of a CUPE 1334 exec member Laura MacLure talking about the issue:

CUPE 1334 has been working without a contract for almost a year, and in it’s own statement last week, the University had the usual platitudes about reaching a fair and equitable agreement. “Recognizing the importance and challenging issues to be addressed, the University engaged the Union in discussions a year in advance of collective bargaining in order to thoughtfully explore options around staffing and levels of service,” the statement read. “As an interim measure in order to give the Union and the University time to have these discussions, the University and the Union negotiated the addition of several temporary employees to improve service levels. The University remains hopeful that the parties are able to identify mutually acceptable solutions to address these challenges, and that a renewal agreement can be achieved.”