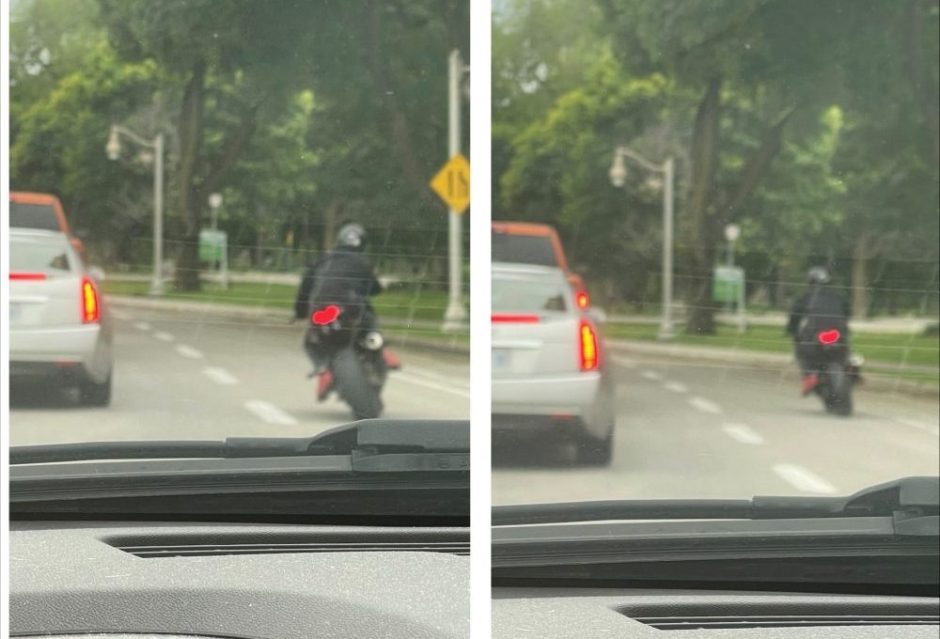 Police Looking for Woman Who Took Photos with Students

Police would like to speak to a woman who took photos with a number of female students aged 9 to 13 at a school on Willow Road on Thursday afternoon. No criminal offence was committed but police and school officials would like to speak to the female about not being on the property of the school. She’s described as Asian, 30 to 40 years of age with long dark hair and a heavy accent. She was wearing a light brown puffy jacket, green pants and a light-coloured baseball cap with the word ‘woof’ on it.

Wednesday was a busy day for police on Guelph roads with five collisions and six driving complaints. While none of the complaints resulted in any charges, there were minor injuries reported from one of the collisions when a vehicle struck a light post in a parking lot on Victoria near York. The driver lost control when his dog jumped into his lap.

Guelph Police are warning people about the rising trend of Emergency and Grandparent scams wherein a suspect will get in touch with a senior claiming to be their grandchild or other family member and explain that they have been injured in an accident or are charged by the police. They will then ask for money so that they can pay a fine or a bill. This is how police say the scam works:

• Scammers claiming to be relative may alter their voice, claiming to have been injured and requesting assistance.

• The scammers will quickly hand the call to another scammer pretending to be a law enforcement official or a lawyer to create a sense of panic, often pertaining to a collision with injuries, discovery of drugs and guns in a motor vehicle.

• “Couriers” are dispatched to attend the victim’s residences to obtain the funds. Victims are instructed to place the funds in envelopes, to hand over to the “courier”. In addition, many vehicles associated to the scams have been found to have Quebec licence plates.

• Victims are requested to ship the funds through courier delivery companies (i.e. FedEx, UPS, Purolator and or local courier services). Victims are instructed to place cash in magazines, teddy bears and shoes boxes to avoid suspicion from shipping companies.

• Some victims are instructed to send funds via direct deposit and or wire transfer.

• CAFC reporting has determined that a large volume of funds are being couriered to locations within the Greater Montreal area, often to empty houses, vacant lots, businesses, churches or rental properties.

If you get one of these calls, hang up immediately and call the police.

Police Board Meeting this Week

The monthly Guelph Police Services Board is this Thursday, June 16, at 2:30 pm. You can see the agenda here, and then tune in to the meeting on the Guelph Police YouTube page.

A 13-year police officer employed by the Guelph Police Service was charged with one count of assault after a domestic dispute call made at 2:25 am on June 4. The member was not on active duty at this time.

A 36-year-old Guelph man was charged with possessing a weapon for a dangerous purpose, uttering death threats and mischief under $5,000 after police were called to Wyndham and Surrey Monday afternoon. The suspect was swinging a hammer while yelling obscenities and making threats against the Crown attorney. He damaged an advertising sign.

Police seized the bat from a 25-year-old male in the area around Goldie Mill Park who appeared to be under the influence of narcotics. The man was found to be bound by several court conditions including a prohibition against possessing weapons so police took his bat as a preventative measure.

A classroom at a south-end school was “extensively” damaged sometime last weekend. Video surveillance showed a male entering the school through a classroom window just after midnight Sunday. Glue and baking soda were poured on furniture and the floor, every cord in the room was cut and a fire extinguisher, television and air filer were damaged. If you have any information about this incident, call Constable Michael Nixon at 519-824-1212, ext. 7028, or email him at mnixon [at] guelphpolice.ca

Police are looking for the owner or owners of a large cache of suspected stolen jewellery found in a search of suspicious person stopped in a townhouse complex in the area of Fife and Whitelaw. If you recognize anything below, call Constable David Lee at 519-824-1212, ext. 7108, or email him at dlee [at] guelphpolice.ca.

A jigsaw, electric heater, concrete mixer and sander were among the tools stolen from a Speedvale East business on Wednesday at 12:30 am. The suspect got access by cutting a hole in the fence, and he’s described as white with his face covered and wearing a grey hoodie, jeans and gloves. If you have any information, call Constable Kent Schneider at 519-824-1212, ext. 7164, email him at kschneider [at] guelphpolice.ca.

Speaking of stolen tools, about $1,500 worth of tools were stolen from a residence in the area of Doyle and Gosling sometime in the early hours last Sunday. The suspect is described as male, white, 25 to 35 years of age, wearing a dark jacket, light-coloured hoodie, light-coloured pants, sneakers and a white baseball cap. If you have any information, call Constable Robert Smith at 519-824-1212, ext. 7388, email him at rsmith [at] guelphpolice.ca.

A truck with an attaching trailer was stolen from a business in the area of Woodlawn and Arrow last Saturday evening. The trailer contained 28 skids of TCL TVs with a value of nearly $100,000. If you have any information about the theft call Special Constable Amanda Chalmers at 519-824-1212, ext. 7516, or email her at achalmers [at] guelphpolice.ca.

Police are looking for a motorcyclist who was driving aggressively in the area of Wellington and Gordon on Tuesday afternoon. A complainant told the police that the biker had cut off a car, narrowly avoiding a collision, then used the bicycle lane to pass other vehicles at a high rate of speed up Gordon (see above). The driver is described as wearing a black helmet, black jacket with a white stripe, dark jeans and red Nike shoes. If you have any information, call Sergeant Ray Gordon at 519-824-1212, ext. 7249.

A 42-year-old Guelph male had his licence suspended for three days after he was pulled over for driving while using his cellphone on Victoria near Grange. His breath sample came back that he had nearly an illegal amount of alcohol in his system.

A 47-year-old Simcoe man was charged with impaired operation, and his driver’s licence was suspended for 90 days after he was found passed out behind the wheel of a vehicle parked on a sidewalk the area of Ontario and Manitoba Streets at 1 am on Wednesday. Police noticed the strong smell of alcohol and the driver had more than the legal limit in their system.

Police are investigating the near-miss of a pedestrian who was crossing Surrey Street East at Gordon on May 29 at 2:20 am. A vehicle turning left on Surrey nearly hit the pedestrian who jumped out of the way, and while the driver left the scene, they also returned a short time later to check on the pedestrian’s wellbeing before leaving again. Police are looking for a black or dark-coloured SUV driven by a male in his 50s with white hair. If you have any information, call the Traffic Unit at 519-824-1212, ext. 7225.

A 62-year-old Guelph man was charged with impaired driving and dangerous driving after a two-vehicle collision last Saturday morning at Kathleen and Division caused when the driver ran a stop sign.

A 41-year-old Guelph man was charged with impaired driving after the staff of a west end business reported that a customer left intoxicated.

A 25-year-old Guelph man was charged with impaired driving and failing to remain at a collision after a hit and run on Hadati Road last Sunday night. The heavily damaged vehicle was found in a parking lot, and police arrest one of the three men that fled the lot on foot, and he admitted that he was the driver.

A 55-year-old Guelph man was charged with failing to attend and obstruct police after he was stopped by police at 2:35 am last Saturday morning. Although he gave police a fake name when they stopped him on his bike, he’s real name led to the revelation that he had missed court on 29 outstanding charges.

A 44-year-old Guelph man was charged with dangerous driving and two counts of possessing controlled substances for the purposes of trafficking. Police finally caught up with a pickup truck they tried to stop back in April last Friday night in a parking lot on Woolwich near Speedvale. A search of the car revealed suspected crystal methamphetamine and crack cocaine packaged in a manner consistent with trafficking as well as a quantity of cash.