Almost a month after winning the 43rd Federal Election, Prime Minister Justin Trudeau revealed his new cabinet that will lead the minority Liberals into a fractured and cantankerous Parliament. If you don’t like learning new faces, the good news is that most of the cabinet are transfers from last term, though some of them have new jobs now.

The new cabinet features 36 members not including the prime minister, which is two more than there was before the dissolution of Parliament. The cabinet maintains Trudeau’s pledge for gender parity, which he made in advance of his first election in 2015.

Ten members of the new cabinet are keeping their old positions, and several others remain  in a modified version of their old jobs. In all, there are seven new members joining cabinet, the most high-profile of which is Bill Blair, who will be taking over the Public Safety file from Ralph Goodale.

The most high-profile cabinet change overall is Chrystia Freeland, who is moving from Foreign Affairs to Intergovernmental Affairs. Pundits have noted that Trudeau might be hoping that Freeland’s luck navigating the Trump Administration on the new North American free trade deal might rub off with equally intractable adversaries in western Canada. Also, Freeland is now the only 10th person in Canadian history to be named Deputy Prime Minister.

François-Philippe Champagne will now serve as Minister of Foreign Affairs, while former Minister of the Environment and Climate Change Catherine McKenna takes over his old spot as Minister of Infrastructure and Communities. McKenna was the subject of many treats and negative comments online, and was given RCMP security earlier this year after an incident outside on Ottawa movie theatre while McKenna was with her children.

Jonathan Wilkenson moves from Minister of Fisheries, Oceans and the Canadian Coast Guard to take over for McKenna at Environment.

It terms of local representation in cabinet, Guelph MP Lloyd Longfield was not given a position (which is how he likes it), while Waterloo MP Badish Chagger will remain in Parliament in a new position, the Minister of Diversity and Inclusion and Youth, which is a new cabinet level position. Another new cabinet portfolio is Minister of Middle Class Prosperity, which will be lead by Ottawa-Vanier MP Mona Fortier.

Jim Carr, who’s presently fighting a cancer diagnosis, was not given a cabinet position, but he was named “special representative for the Prairies.” The Winnipeg MP will be tasked with ensuring that “the people of Alberta, Saskatchewan, and Manitoba have a strong voice in Ottawa.”

Pablo Rodriguez, who will serve in cabinet as Government House leader, will also be assuming the responsibility of Quebec Lieutenant.

“Today, I can introduce the strong, diverse, and experienced team that will work together to tackle the big issues that matter to people from coast to coast to coast,” said Trudeau in the media statement announcing the new cabinet. “Whether it’s making life more affordable for the middle class, taking action on climate change, or keeping our communities safe we will continue working tirelessly for all Canadians.”

The full list of new cabinet ministers and who they’re succeeding is below. Lines in pink denote ministers and positions that remain unchanged, and the names highlighted in green are the new members of cabinet. 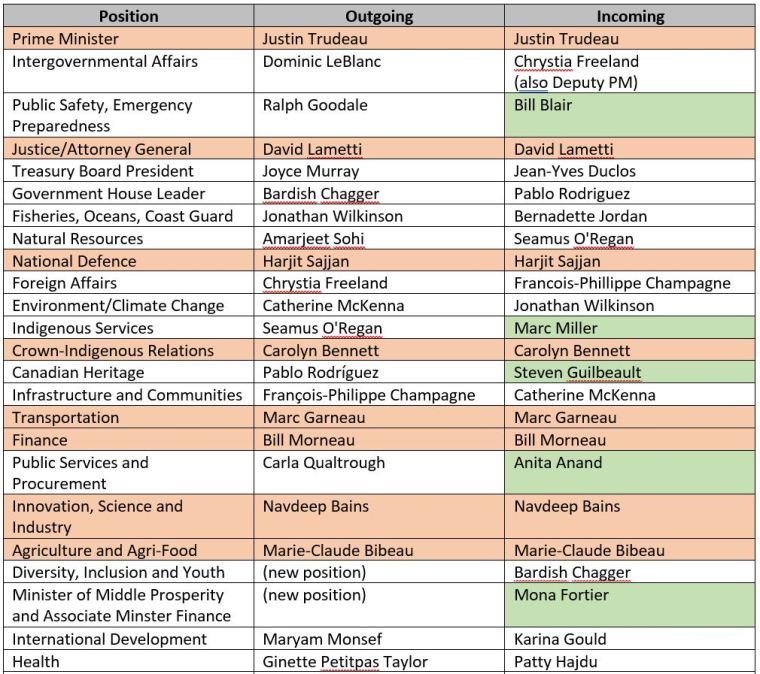 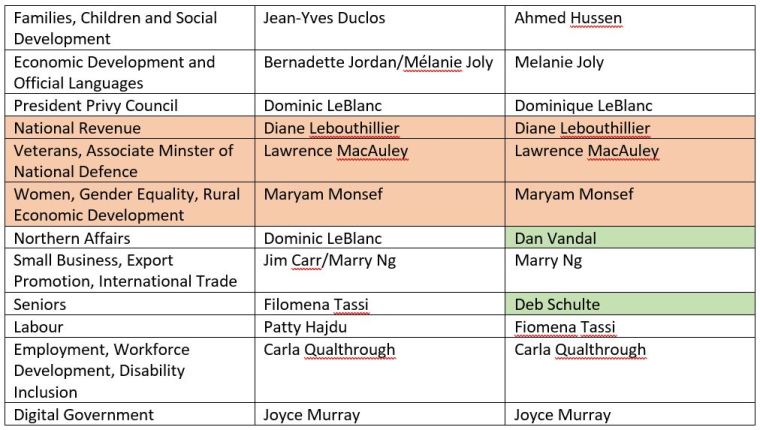