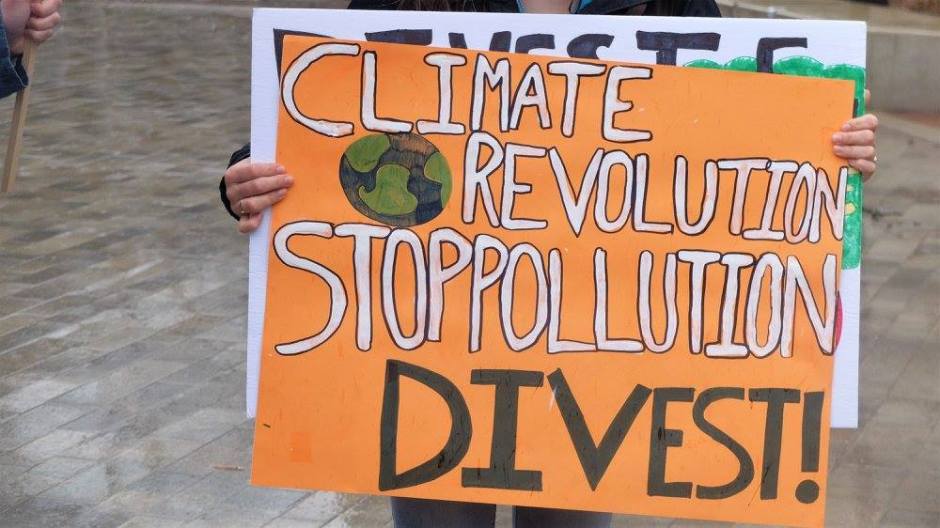 On Tuesday, the Board of Governors at the University of Guelph are meeting, as they regularly do. But there’s an item on the agenda this month that is quite irregular. The final report of an ad-hoc committee on Special Action Requests is bringing back the results of an investigation into whether or not the U of G should divest from fossil fuel companies, and the people that helped bring the request forward are not going to like the answer.
The report, which was released with the Board of Governors meeting agenda package, reached a conclusion that the Board of Governors should not “support undertaking broad‐based divestment from the fossil fuel sector,” although they also admit that “the university must continue to make a significant contribution to mitigating the risks associated with climate change and that there is a role for the endowment to play in this contribution.”

This is not satisfactory to the group that asked for the review in the first place.

“Without the actual divestment, I think they’re missing out on a big opportunity to show their green reputation” said Spencer McGregor, a spokesperson for Fossil Free Guelph. “It seems like everyone says one thing, but they’re reaching a different conclusion.”

A representative of the University of Guelph said it would be inappropriate to offer comment in advance of Tuesday’s meeting, and that they weren’t taking media requests for comments or interviews until after the vote.

Fossil Free Guelph’s submission dated April 6, 2017 asked the University of Guelph to freeze all investments in 55 companies that are part of the fossil fuel and energy extraction industries including Exxon-Mobil, Kinder Morgan, and Suncor Energy. Fossil Free Guelph requested that the U of G divest from current investments over a period of five years when the General Endowment Fund and the Heritage Fund are both reinvested in “ethical alternatives that are more in line with the University of Guelph’s purported values.”

“It’s not an unrealistic demand, we realize that you can’t snap your fingers and make this happen,” said McGregor.

The Board of Governors struck an Ad‐Hoc Committee on Special Action Requests in May 2017 to consider Fossil Free Guelph’s request. For Fossil Free Guelph, the wind was at their backs. They have the support of the Central Student Association, and, in a 2016 referendum question, 72 per cent of undergrads voted in favour of the university divesting.

In addition to this evidence of wide-spread campus support, the ad-hoc committee asked for its own feedback from students, faculty, staff, alumni and the general public. In all, 134 responses were received and “the majority of respondents favoured divestment,” according to the report. The reason? “Those respondents in favour of divestment most often cited the social injury caused by fossil fuel use, conflict with the university’s mission, and the desire for the university to demonstrate environmental leadership as their reasons for supporting divestment.”

And yes, there were some people in favour of the status quo.

“Those respondents in favour of maintaining the university’s current investment approach most often cited financial risk, environmental progress and effective regulation in the fossil fuel sector, and a lack of evidence supporting the use of divestment as a tool to reduce social injury in support of their views,” said the report.

It seems on that last point, the university is putting much of it’s justification for not moving forward with divestment.

“That whole situation with identifying 55 companies for divestment was actually based on old information from Freedom of Information request a few years, since then they might have changed their investments,” said McGregor. “But we added a clause in our official demand that any company not included should be assumed to be a part of the proposal, a fossil fuel industry-wide divestment.”

As for the committee’s argument that their investment is too small to make a difference, McGregor doesn’t buy it. “I think any amount for them to divest is a big deal,” he said, “and a large part of it may not be the financial aspect, but the point we are trying to make is that the University of Guelph, as an institution, should divest to show their an environmental leader.

If they really care about the issue of climate change and that they’re willing to act on it,” he added.

In the university’s mind though, they are acting on it, at least as much as higher levels of government are acting on it. “[T]his commitment to fighting climate change has not forestalled the approval of new fossil fuel extraction and transportation projects. Nor has it caused provincial governments to abandon the use of fossil fuels for electricity generation,” said the report. “[I]t is clear that their actions do not tend to favour complete disassociation or divestment from the fossil fuel sector.”

Aside from the footprint and (in)action of the government, the third reason to not divest is the fiduciary responsibility of the board to not risk the financial health of the funds with unacceptable risk. “The committee accepted that it is not possible to predict the impact of divestment on the university’s endowment portfolio with a reasonable degree of certainty,” the report said, adding elsewhere that, “in general, the university does not select the specific companies in which it is invested.”

McGregor doesn’t buy it. “It seems to me that they’re just taking the easier route,” he said. “In my mind, it’s an excuse because other institutions have divested, so there is a way to do it while managing any potential loses.”

It Can Happen Here

Divestment has become an important tool for environmental activists in combating climate change, and while much of the effort has been focused on universities, municipal corporation with endowments or pension funds have become part of the debate too. Just last week, New York City announced that it would be divesting to the tune of $5 billion, joining other American cities like San Francisco, Seattle, Ann Arbor, Washington D.C., and Madison, Wisconsin.

Here in Canada, Université Laval in Quebec City announced last February it’s intention to divest from fossil fuel companies, and re-invest in renewables, making it the first, and so far only, Canadian university to make the commitment. It’s not because the passion isn’t there. Numerous Fossil Free chapters are up and running on campuses across Canada, but they have not shared the success of the Laval group though it’s been close a couple of times.

The University of Ottawa announced in 2016 that they were “reducing the carbon footprint of our entire investment portfolio by at least 30 per cent by 2030 — in line with Canada’s national climate commitment.” That same year at the University of Toronto, an advisory committee to the Board of Governors recommended divestment, but U of T President Meric Gertler overrode the recommendation in favor of “a plan that is actually going to make a difference.”

Meanwhile, in the United States and around the world, dozens of post-secondary institutions have pledged to divest themselves from fossil fuels including Johns Hopkins University, King’s College London, and Stanford University. Harvard University voted last year to “pause” any further investment of their $36 billion endowment into fossil fuels.

“These are huge financial indications that divestment is possible and that fossil fuels are no longer a good investment,” added McGregor.

The End is the Beginning

So it will come down to the Board of Governors meeting, and how they vote on Tuesday afternoon.

Fossil Free Guelph will be holding a protest in the courtyard of the University Centre, and then lead a procession downstairs to Peter Clark Hall where the meeting is taking place. “I’m hoping that they recognize that public opinion is on the side of divestment, and that there is enough support that if they choose not to [divest], then there would be negative consequences for their green branding,” said McGregor. “Changing their mindset in one day can be difficult, but we’re hopeful.”

And in the unlikely event that the Board of Governors will not vote to overturn the status quo, McGregor said that the Fossil Fuel Guelph team is prepared for that too. “We definitely want to keep the pressure on because even though this is the final decision, we think we can still have an influence and show them there that this is really bad publicity for [the university].”

“It’s not done until we get divestment,” he added.