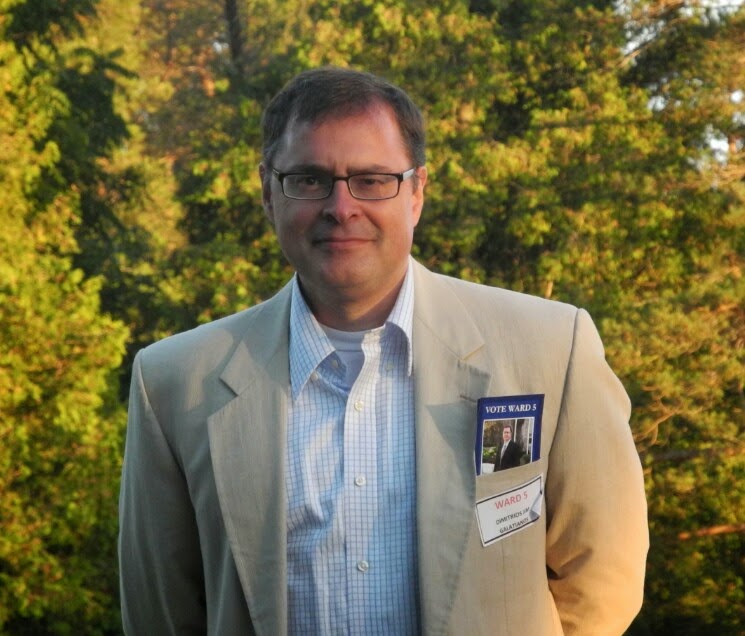 If Jim Galatianos can take pride in one thing, it’s that he managed to subvert the old adage, “You can’t beat city hall.” But that surely comes as cold comfort to the former city council candidate who spent nearly six years and thousands of dollars to get City of Guelph staff to admit that they overstepped their authority when they removed what they called “debris,” and added a charge to his tax bill for the privilege.

The City of Guelph has opted not to appeal a court ruling in Galatianos’ favour, a litigious clash that began on an October day in 2010 when two Property Inspection Officers from the city arrived at his home, and carried out a 75 minute inspection following a complaint from a neighbour that Galatianos was not told the specifics of.
“After 5 1/2 years and $17,000 in legal costs I thought I would be angry and resentful with the property standard officers but they are just following the policies that our elected representatives give them to enforce,” Galatianos said in an email.

“The case is not as black and white as Mr. Galatianos makes it out to be,” said Ward 5 Councillor Leanne Piper. The bylaw that Galatianos was found in violation of was brought to council by Piper in 2008.

“I would not characterized the outcome as a ‘win’ because his original claim was that the city had no right to enter to remove garbage from his property. He dropped that case when the Supreme Court upheld city’s right to enforce its bylaws in an unrelated case.”
According to Scott Worsfold, Deputy City Solicitor, the original case by Galatianos was based on the idea that city officials had no right to enter his property, but case law makes allowances for staff to enter private property for the purpose of bylaw enforcement. The trial, and subsequent judgment, eventually came down to compensation for items taken, specifically a fireplace, a tarp, and some pool parts.

“Ultimately the Guelph small claims court found that Mr. Galatianos was using the three items, and so found that the City should not have removed them as debris,” said Worsfold in an email forwarded to me by Piper. “The judgement was therefore against the City in the amount of $1796.63.”

In all, Galatianos will be getting a $3,800 cheque from the City, the value of the items taken from his property plus 15 per cent of his legal fees. Aside from still being $14,000 short on legal fees, Galatianos only has one grievance left after the process. “The only real issue I have is with City Hall,” he said.

How did all this get started? Galatianos was found in violation of the Yard Maintenance Bylaw, a measure passed in 2008 that requires homeowners to maintain their property in a “clean, clear and safe condition.” The two inspectors, Jason Lapierre and Stephen Jamieson, identified a deflated above-ground pool, wrapped tarpaulin meant for a backyard rink, an old wood stove, leaves meant for compost spread out in a garden, and an improperly stacked pile of wood as grounds for violation.

After several more visits,* the “offending” property was removed from Galatianos’ yard by the city, and he was given an invoice of $208.65 plus a $50 user fee. With no appeals process and no response from either of his city councillors, Galatianos decided that he had no other recourse than to obtain legal council and take the city to court.

*You can read the blow-by-blow as chronicled on Galatianos’ website on the matter.

“In particular I can only hope that Councillor Leanne Piper will now agree to modify her ‘Yard Maintenance By-law’ and put in place an appeal mechanism,” said Galatianos. “I can now only hope that she will keep to her campaign promise to listen to the residents of Guelph (her employer after all) and safe guard their rights to a fair and impartial hearing.”

“No one should have to go through this again,” Galatianos added.

Piper, for her part, agrees that residents should have the ability to appeal immediately once cited under the bylaw. “I do believe that our bylaws should have a local appeal mechanism,” she said. “Many of our bylaws do have an appeal process and this one does not, which I am open to reviewing. When public health or safety are at risk, ‎it is important that any appeal process is quick and expedient.”