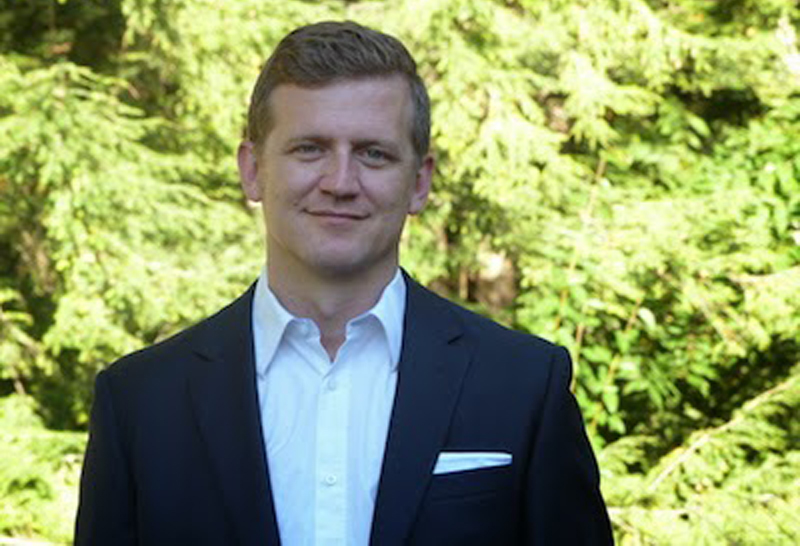 First time candidate Scott Butler joins an active and accomplished slate in Ward 5 as one of six candidates looking to represent the voters in and around the University of Guelph neighbourhood on city council.

Butler leads the Policy and Research Department at the Ontario Good Roads Association, one of Canada’s oldest and largest municipal organizations. In his job, he’s responsible for all government relations pertaining to municipally-owned and municipally-managed infrastructure. According to Butler, he’s been instrumental in negotiated with the provincial government around infrastructure funding, mandatory asset management and new revenue tools for municipalities, which would serve him well if he should be elected to city council.

In his spare time, Butler sits on the Board of Guelph Soccer and is a member of the fund development committee of Hospice Wellington. Now, Butler hopes to lend his skills and experience to the horseshoe in city hall, and he took some time to answer the Guelph Politico candidate questionnaire.

I’m running to represent Ward Five because for too long Guelph has had an ineffective council. I want to create positive change.

Our city is wonderful — and under pressure from many sides. Residential taxes are too high because council’s lack of vision and action has failed to stimulate economic development. Planning is not being done with strength and foresight and as a result, we are not setting the City up to succeed in the future. Guelph’s bureaucracy is complacent, so doing business here — or simply getting a building permit for an extension on your house — is usually a costly nightmare.

None of that should go on after this election. In fact, elections are designed to fix these very problems.

Diversity is Ward 5’s most defining and unique characteristic. Ward 5 is home to the University of Guelph, two developed commercial strips, an innovative and dynamic retirement community, long-established and relatively new neighbourhoods and a wealth of natural features. Both the federal and provincial governments have operations in Ward 5. As well, Ward 5 is home to the Ontario AgriCentre, the closest things that we currently have to an agri-food incubation centre. It is this diversity that makes Ward 5 ideally poised to find the solutions that will make Guelph more equitable, more inclusive, more prosperous and more open to the world.

As a parent I am always more concerned with the Learning Skills and Work Habits section of my children’s report cards. With a hat tip to the Ministry of Education’s report card template, here is my assessment of the current council’s skills and work habits. 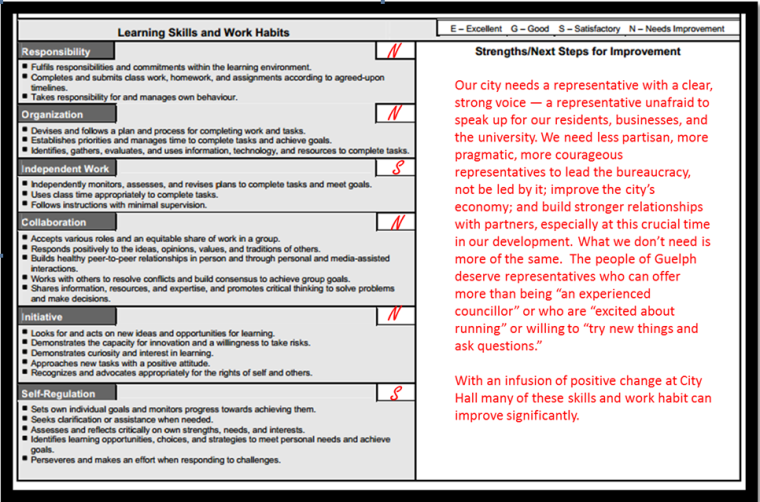 4) Some people say that Guelph is over-taxed, others believe that our taxes are inlinewith a community our size; where do you stand on taxation in Guelph?

Holding tax increases in line with inflation is my objective. However, our over-reliance on residential property taxes makes this difficult. Moreover, without knowing our infrastructure deficit, we can’t accurately and honestly measure our unfunded liabilities. Budgeting is about priorities. The state of our streets suggests we need to reprioritize. We must make sure our infrastructure is in top shape. Question all other costs thoughtfully.

No one disputes that there have been a number of questionable decisions made regarding the allocation of public dollars. The $8M Urbacon payout is the most glaring, but hardly the only, example. Anyone who claims that there is no need to rethink and critically question how the people of Guelph expect their money to be reinvested into the community is unworthy of your vote. But spending is only half of the problem. Like every other municipality in Ontario – with the notable exception of the City of Toronto – Guelph is hamstrung by a 19th legislative framework that sets out the parameters for governing an increasingly complex city in the 21st Century. We are overwhelmingly reliant on the residential tax base but have very few options for generating new types of revenue. In August, the Minister of Municipal Affairs and Housing committed to holding public consultations on providing municipalities with the legal power to generate new, more responsive sources of revenue. This is an opportunity for the next council to demonstrate ladership by being active in this process.

It would be irresponsible to start any new big-ticket projects before measuring our infrastructure deficit. You wouldn’t take a European vacation if your roof needed replacing. Once we know our infrastructure deficit, projects that grow the city’s tax base must be the priority. For example, public/private partnerships on Baker Street and the former penitentiary lands, done well, have the potential to improve both civic life and civic revenues.

7) How would you proposed to mend relations between the city and transit workers, and to improve the services of Guelph Transit?

Let’s start by making sure that when frontline staff requests a place to eat lunch and use the washroom that we listen. And accommodate. Not lock them out. We also need to make sure that we listen to the input of Guelph Transit employees. The need to fix the transit file is pressing. It would be preposterous to think that we can arrive at a solution without leveraging the experience and expertise of Guelph Transit employees.

As I have shown throughout this campaign, I will go and meet the people of Ward 5 face-to-face. At times I have felt a bit like Marco Polo, seemingly going to places no other candidate or councillor had gone before. For too long, too many of our neighbourhoods have been ignored by our representatives. I will bring integrity, honesty and decorum to all of my interactions with constituents. I won’t duck constituents when they are upset. And I won’t misrepresent myself on-line to advance partisan interests.

Anything that makes participation in the democratic process easier and more universal should be embraced. Online voting does this.

What’s missing in Ward 5 is a representative with a clear, strong voice — a representative unafraid to speak up for our residents, businesses, and the university. We need a less partisan, more pragmatic, more courageous representative to lead the bureaucracy, not be led by it; improve the city’s economy; and build stronger relationships with partners, especially at this crucial time in our development. What we don’t need is more of the same.

Local government should only be a force for good. Any initiative, program, policy or project that doesn’t satisfy this basic objective should not be pursued.