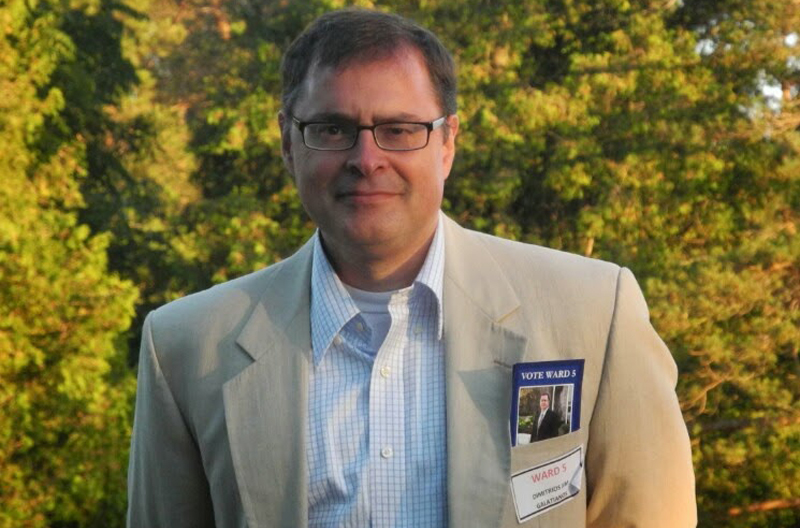 Dimitrios “Jim” Galatianos is running for city council in Ward 5, and to say that he has an axe to grind is something of an understatement. He’s been fighting a legal battle the last four years with the City of Guelph over by-law enforcement on his property, which Galatianos feels was excessive in its reach and reaction.

The son of Greek immigrants (“for me, My Great Big Fat Greek Wedding was a documentary,” he says), Galatianos got into politics early serving as President of the College Of Social Science at U of G, where he was one of the organizers of the original Magic Bus. He’s worked at Homewood Health Centre, one of the top mental health and addiction facilities in North America and a Guelph institution, for over 25 years. In 2007, Galatianos received his certificate as a Family Mediator, and as a member of the United Food and Commercial Workers union, he’s assisted in the negotiation of a few collective bargaining agreements.

Taxes going up at nearly twice the rate of wages, yet serves are constantly being reduced.

I want to help put an end to all these ego driven pet projects of this current council.

I want to focus on the infrastructure that needs to be fixed, that has been ignored for the past 8 years.

City hall has been used as a personal toy box for too long.

Ward 5 more than any other Ward has the issue of a high concentration of long term home owners and short term renters living next to each other. Two different groups using the same space for different purposes. Sometimes this creates friction and a less than perfect co-existence.

After many failed attempts to fix this problem, the current council thought re-inventing the wheel in the version of the “Nuisance By-law” was the solution.

They wanted to spend a million or so dollars, to create another layer of government approximately one-tenth the size of the Guelph Police force and maybe that will make things better.

It wasn’t until city staff told them it was a bad idea that the concept was dropped.

I know from personal experience that the City already has all the tools it needs and maybe a few it should not have. See http://www.fightguelphbylaw.com to get an idea of what the city really can and already does.

What is needed is a change in leadership that will focus on the issue of renters that do not respect a home owner’s right to enjoy their property in peace.

New energy that will engage all stake holders and new approaches that believes a bigger and bigger hammer is not always the answer.

This is from the Canadian Taxpayers Federations report card of Guelph; “Guelph punches below its weight in municipal management. Growth in salary spending is spiraling out of control and must be curbed.”

It is not just me, but an impartial third party, that gives the City a failing grade of “D”

We are over taxed.

But the reason a big change is coming to City Hall on Oct 27th is because of the never ending waste of those tax dollars.

What the City has lost fighting court case after court case it could have paid to maintain the stormwater system for the past eight years.

I know from personal experience that when I was in court against the City, Scott Worsfold, their lawyer only had instruction to proceed to trial. He did not have instruction to settle. And if they lost Mr. Worsfold made it known that the City would have to appeal; this even before a trial has even been held.

Please don’t sue me for saying this, but “I” believe that changing the mind set within City hall that my “Legal Department is bigger then your Legal Department” is needed.

I have made very clear and very firm my commitments on this issue.

Cancel the proposed Downtown Roundabout. It will cost millions and only serve to choke off traffic through the core at best, at worst it is an accident waiting to happen.

Even by the City’s own reports this area has been greatly underfunded.

Locking out staff while attempting to negotiate showed lack of respect for the collective bargaining process. It also showed a disregard for the residents who depend on the service.

As a long time Union member, I know how damaging this decisions was. We have the best front line workers, not just in transit but throughout the City.

They are our friends and our neighbours. They deserved better treatment them that.

I do not think we can move forward while the same people who caused the damage are still in control. On Oct 27th. they needed to be rewarded with the “Royal Order Of The Boot” (Sir. Winston Churchill)

Having scheduled set hours and meeting one to one.

As exhausting as campaigning is, the one on one meetings always leaves me energized.

Ward 5 also has the highest number of community groups and I will definitely take advantage of that fact.

I am very much in favour of increased voter participation.

Of course voter security is a concern.

Providing more serves to new arrivals to the country. The majority of the growth over the next 15 years will be through immigration and we do not have a strong enough safety net. We are not nearly ready to welcome our new neighbours.

Fix what they are supposed to fix.

Remember it is the Taxpayer who signs your pay cheque and without them the whole thing stops.

Give the City back to the tax payer; without the Taxpayer there would be no Guelph, yet the only time they are sure to be treat with respect is during election season. This will change.

Give the Tax payer value for their EVERY tax dollar; focus on Value driven projects that the Taxpayer needs and expects. Safe sidewalks, sewer systems that work, rain water running off, buses that run, etc.