March closes like a lamb after a very busy month around the horseshoe. The real horseshoe. From the neverending debate over council compensation, to a very controversial new development project, to the latest iteration of the Official Plan, there’s a lot of ground to cover from last month’s four meetings. The recap of March at city council is below.

Committee of the Whole Meeting– March 7

City council kicked off another month of meetings by holding its first true hybrid council meeting in the council chambers. The mayor, five councillors, the exec team and the media were all in the chamber while everyone else beamed in on the big screen.

In terms of the action at council, the first topic was the follow-up report about what went wrong with the decision making around the demolition of 797 Victoria Road North. Promises were made that this is a mistake that will not happen again as City staff pursue 14 recommendations to improve the processes and oversight on heritage, but Councillor Leanne Caron put forward a motion to get an interim report later this year on the improvements, and it was approved unanimously.

The next item was the recommendations of the Council Renumeration and Support Advisory Committee, and over the course of about two hours committee changed all those recommendations.

First, council undid the recommendation to cut the mayor’s salary to bring it inline with the request to have all salaries reflect the 55 percentile of the City’s non-union employees. Councillor Cathy Downer, who made the motion, said that it didn’t make sense to go backwards since there will be no commensurate cut to the mayor’s workload next term, and it was passed 8-5.

The next amendment deleted recommendation number two entirely, the one proposing that councillors be declared full-time positions. Committee decided that since the Municipal Act makes no mention about councillors being either part-time or full-time then City of Guelph policy shouldn’t either, which also launched another debate about whether or not the nature of the job is part-time or full-time. The motion was eventually passed 12-1.

Then, in the final adjustment to the Renumeration Committee’s recommendations, committee replaced the suggested $75,000 annual salary for councillors with the alternative recommendation for a little over $51,000. The amendment was passed 10-3, but a few councillors were skeptical of the criteria and information used to reach the $51,000 number, so an additional motion was passed asking staff for more information to be received for the regular meeting at the end of March.

Two additional motions were not as successful. A motion to bring council a recommendation for a constituency support staff worker for the 2023 budget process failed 5-8, and another motion to direct staff bring forward options for reviewing council compensation in-house was pulled after staff said they were already doing that work.

After a short break, committee heard two motions around Community Benefit Agreements. The first motion from Councillor Dominique O’Rourke asked for more rigorous reporting and accountability requirements for CBAs worth $200,000 and over. Some on council took issue with the wording and felt that it sounded overly punitive and ambiguous, especially after staff noted they already receive a lot of rigorous reporting from those groups, but they don’t necessarily share that with the public.

After some back and forth, the motion was wordsmithed to simply ask for more “enhanced reporting” for CBAs over $200,000. The vast majority of council was able to get behind the softer language that still answered O’Rourke’s desire to get more insight that the CBAs are accomplishing their statement goals, and the motion passed 12-1.

More contentiously was a motion from Councillor Dan Gibson to request that board members of groups receiving CBAs sign on to follow the City’s Code of Conduct, which presently applies to council, plus local boards and committees appointed by council. Gibson said the motion was designed to create public confidence for these public facing groups, and it creates a form of oversight for people who may have concerns about a Guelph group receiving City funds to administer programs.

Many on council were concerned because the motion could only invite groups holding CBAs to sign up, and even if they do, there’s still no formal oversight because those groups are not formally under the jurisdiction of the integrity commissioner like council and local boards. There was also a slippery slope argument, while Downer noted that groups like the Canadian Mental Health Association also have members from Waterloo Region and receive just $43,000 through a CBA out of their $42 million budget. Why should the City of Guelph’s Code of Conduct apply to them?

Even Gibson agreed that the motion perhaps bites off more than committee could chew at this meeting, and he withdrew it so that he could get some answers to the questions raised by his colleagues. 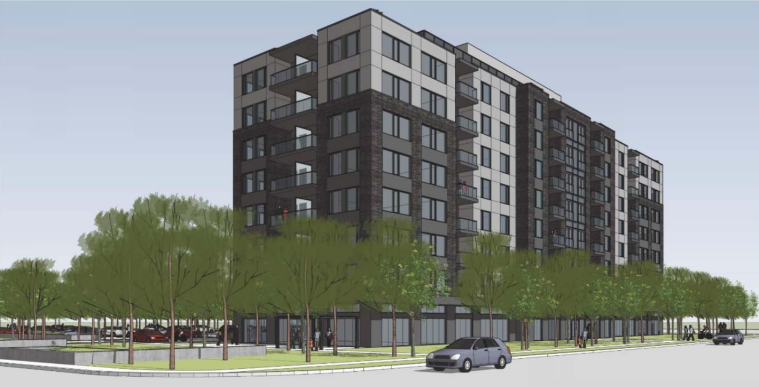 Council got back to business after March Break with the monthly planning meeting, and though there were only two items on the agenda, there was a lot of public interest in one specific project.

Before getting to that project, council heard another appeal from Jason Puterman, the owner of building on Woodlawn Road housing multiple dental practices. His latest sign bylaw variance request had been turned down by staff and he hoped that council might override, but council instead sided with staff’s determination that a sign on the “mechanical penthouse” of the building was a variance they also could not approve and unanimously endorsed the staff recommendation.

After that, it was on to the Statutory Public Meeting Report for 1373-1389 Gordon Street. Reid’s Heritage Properties want to build a nine-storey tower on the land with about 100 units, first floor retail and offices on the top floor. Nearly a dozen delegates came out to voice their concerns about the project and they all centred around some familiar themes.

On the environment, area residents are concerned about the impacts on wildlife in the area, and the loss of several older trees on the property, especially when you take into account that most of the property’s footprint will be taken up by a parking lot. On density, residents are worried that the project is too tall for the surrounding area and they’re especially worried about the additional pressure of more traffic along this stretch of Gordon, which is already so busy and without a crosswalk at Vaughan Street.

After the delegations, council noted that the delegates were very well informed and articulated their concerns very clearly. Attention was paid when the developer’s planner said that the owners are prepared to work with the community to address any and all concerns if the project has a hope of proceeding. Before voting to receive the report, Mayor Cam Guthrie explicitly told the developers that they’ve got a problem with this application.

On the surface, it looked like a pretty light city council meeting with mostly just the ratification of Committee of the Whole business on the agenda, but most of the meeting’s 90 minutes were taken up with debate around one very specific item.

That item was the City Council Remuneration and Support Advisory Committee Report, and as you may recall, council more or less threw out the entire recommendation from the outside committee empanelled to reach an impartial decision on council compensation next term. Not satisfied with the complete re-work of the recommendations done on March 7, council had a few more changes to make.

First, the council salary for the next term was further adjusted to $47,446, a 14.6 per cent increase over their current salary. The adjusted number comes from a staff memo prepared for the meeting and it apparently more closely reflects the 55th percentile figure the committee was aiming for.

Recommendation #4 was also amended, removing the intention to get another Council Renumeration and Support Advisory Committee together in 2026 and assigning their duties to staff. The justification from Councillor Cathy Downer was that this is twice that council didn’t enact the committee’s advice, so why would council put together a committee like this again. The motion passed 8-5.

Councillor Christine Billings brought forward a motion to add a line to recommendation #1 that the mayor’s salary for next term came with a zero per cent increase. That one passed, but her subsequent motion to note that council’s salary is going up 14.6 per cent was voted down 5-8. Some councillors felt this was coming dangerously close to politicizing council salaries.

In terms of additional motions, Councillor Leanne Caron asked staff to look at getting council connected with OMERS, which is the Canadian public pension plan fund. Guelph is one of the few among its comparator group to *not* buy-in to OMERS. The motion passed 11-2 and a report should come back sometime before the end of term. Council also approved a motion from Councillor Dominique O’Rourke to do a total compensation analysis for the mayor’s salary before the next review.

Finally, Councillors Allt, Caron, Goller, and MacKinnon, plus Mayor Guthrie, volunteered to sit on the business license appeals committee to hear the appeal of the City’s refusal to issue a business license. That appeal is coming up on Wednesday April 6 at 4 pm.

After laying out all the changes, council heard from eight delegates on the matter, and there was some widespread concern about environmental protections, opens spaces, park development, and safeguarding natural heritage systems. A couple of delegates from the Rolling Hills area also expressed concerns about that area’s redevelopment while other delegates wanted some assurance that the real cost of growth was accurately reflected in the amendment.

Questions from council dealt with many of those same points of conversation. There was some anxiety about heritage properties and making sure that there’s protection for buildings on the Couling list until staff are finished their review. Many councillors looked at development issues in their area, like Councillor Dan Gibson’s double check about the allowance of residential in the mixed-use node at York and Victoria, or Councillor Dominique O’Rourke’s concern about increasing density along Gordon Street.

There were also some questions about protecting the wildlife corridor on Gordon near Arkell, the effects of the late breaking announcement of Bill 109 at Queen’s Park (see below), and whether there was wiggle room on height limits in some places if it means that buildings don’t have to go as high in other places.

The report was received unanimously, and now goes back to staff for further refinement before coming back to council for final passage this July. If you have any thoughts on the subject, you can share them on Have Your Say (haveyoursay.guelph.ca) anytime until April 20.