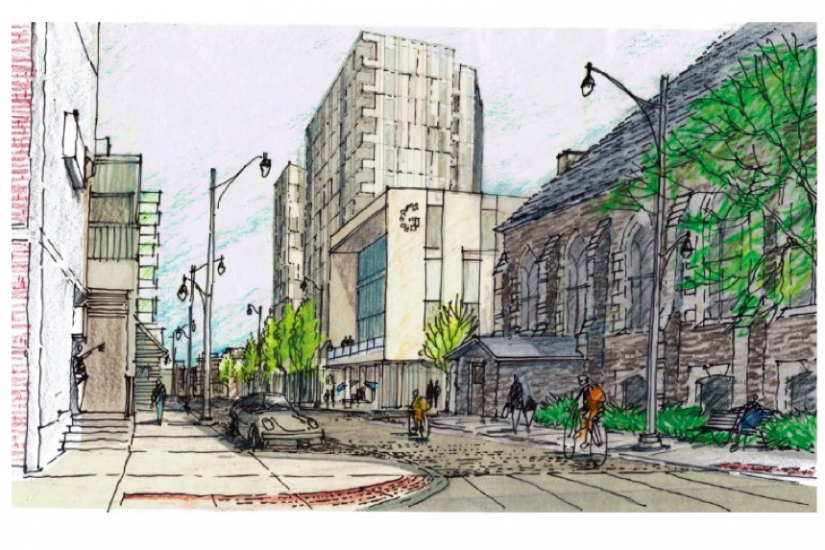 In what might be described as a delegation in advance of next week’s two meetings about the Baker District Development, some 500 people signed up to take part in a virtual open house on the proposed new main library. The presentation was the first chance that the public had to see what the library might look like in its proposed new home in its own separate building at the south end of the Baker District site.

“We have a keen interest in the success of this project, and of the downtown core, and this project represents a catalyst,” said Duncan Bates, an architect with Diamond Schmitt, who is leading the design of the library portion of the development. Bates noted that this is not the final layout design, but since the location of the library has shifted in recent months, he had to “ensure that the program and design elements would work in this alternate scenario, and there was only one way to do that: draw it.”

Below, these are the designs represents the first pass of the alternative library design: 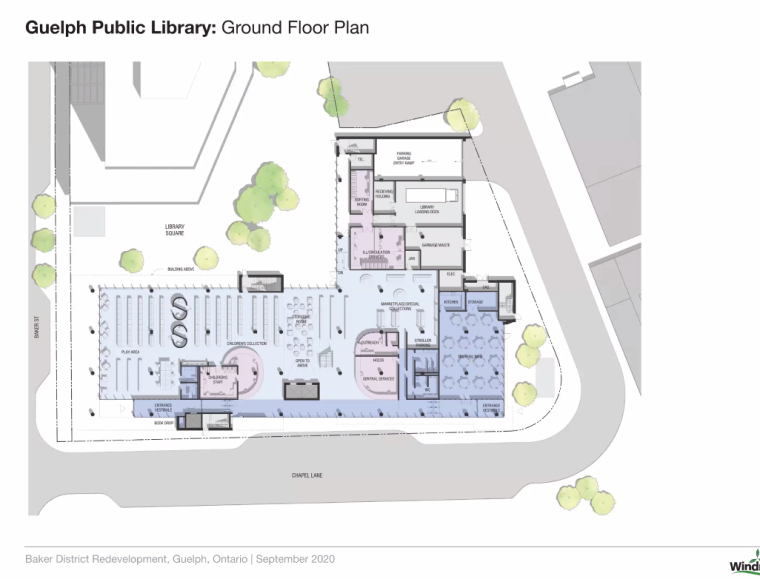 On the ground floor, the biggest component will be the children’s library. According to Bates, the intention is make the bottom floor of the library lively with the colour and activity of the children’s library, which is currently sequestered on the second floor of the current main library. The biggest meeting room in the building will also be on the bottom floor, and it will be accessible after the regular library hours if groups want to use it late. There will also be direct access into the library via an elevator from the underground parking below. 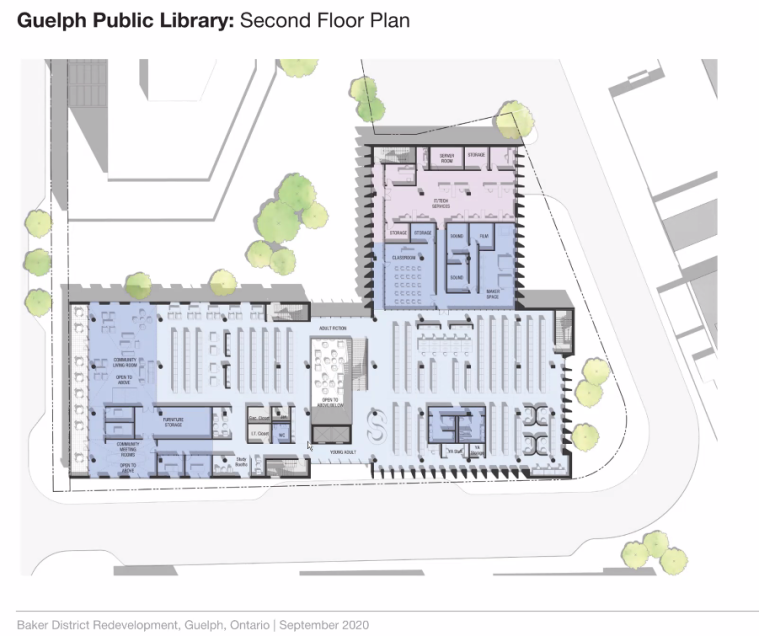 Adult fiction, and young adult fiction will be accessible on the second floor, and when you’re there, you will notice the atrium that will span all four floors of the library; it will bring light from the roof into the bottom floors, and it will raise the noise from the children’s library to make the whole building feel more lively. There will also be a “community living room” where people will be able to sit and enjoy books or periodicals, and there will also be an outdoor area where people can sit in the nicer weather. There will also be some smaller meeting rooms and a making space with a 24-person classroom.

The third floor will contain the non-fiction section, and it will be where the library’s formal quiet space begins. The bulk of the library’s administrative functions will be on the third floor, which will also feature a number of windows that will offer great views of the downtown core in the southern and easterly directions since the third floor puts the library above the height of many of the buildings on Quebec and north Wyndham Streets. 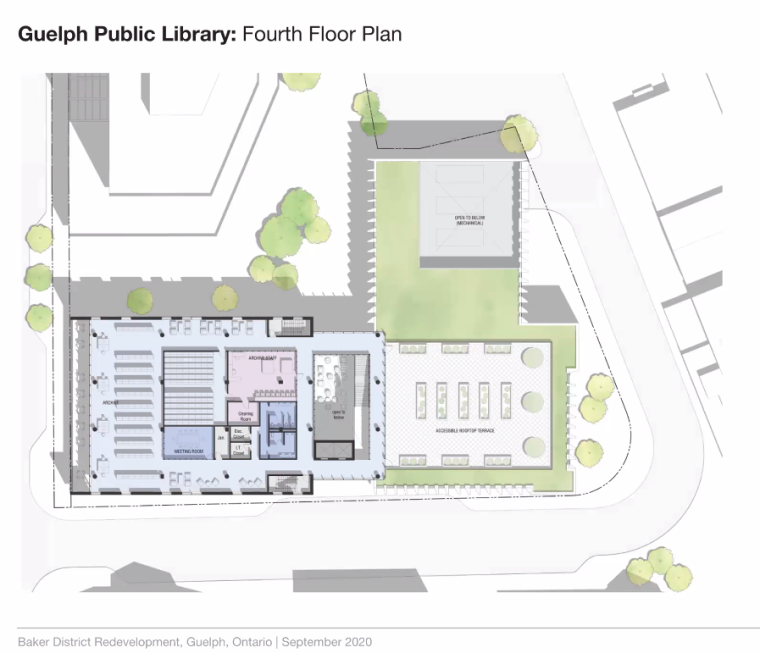 Bates called the fourth floor the “crown jewel” of the building. It will be where the library’s vast archives will be housed, and it will offer access to a terrace on the roof of the third floor that will overlook St. Geroge’s Square. Bates said that this view will provide Guelph the “Instagram moment it needs” downtown, a vista that will draw visitors and promote the area. 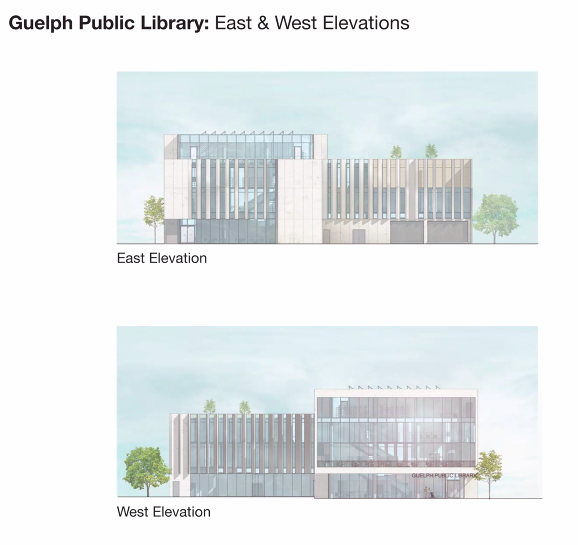 The external look of the library will be a combination of limestone and raw, unfinished metals. The look is meant to play off the general aesthetic of Downtown Guelph, which Bates said is “unpolished”, which is to say that Guelph has a “natural beauty” that comes from having a variety of different building designs in the core.

Bates was joined in the presentation by Guelph Public Library CEO Steve Kraft, and Library Board Chair Scott Butler. Kraft said that this is a “really good project and it needs to proceed,” while Butler noted that business leaders, when they look at the livability of a city and if its future ready, look at parks, bike lanes and libraries. “We can’t come up short if we want to maintain and enhance the quality of life and prosperity [in Guelph].”

On the outside of the library, the presenters also promised that the project would beautify the immediate area along Baker, Chapel Lane, and the walkway between Baker and St. George’s Square. Megan Torza, an architect with DTAH who is leading the design of the rest of the Baker District, said that the idea is to “bring it alive and make it a safe and comfortable place to be.” Comparisons were made to both the Distillery District in Toronto, and to Carden Street here in Guelph in terms of creating an unconventional streetscape that is about more than moving traffic.

There are a number of details that are still in flux. It’s unlikely that a coffee shop or cafe will be a part of the new library, but there might be a coffee cart of sorts that can make the rounds in the building. The customer service details are still being worked out, and so are the placement of the computer workstations, which will probably be spaced out around the library as opposed to being centrally located. The library will also have to work out how they’ll manage their archives and special collections, which Kraft conceded has not been “done efficiently” in the past.

Despite the excitement of those taking part – both the hosts and the audience – the library project is far from a done deal. Butler asked people to get in touch with the mayor and their city councillors to voice their endorsement of the project, and to write a correspondence or sign up to delegate at one of next week’s meetings on the subject.

If you would like to have your say at next weeks Committee of the Whole, and/or the special meeting of council, you have until Friday at 10 to get in touch with the clerks office.