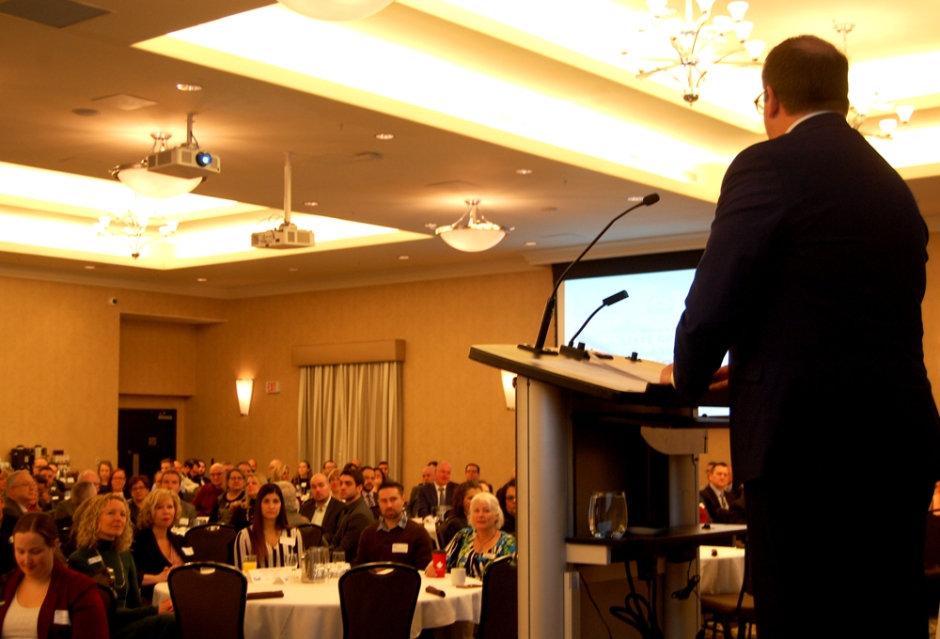 As we’re entering this third calendar month under a state of quarantine, we’re starting to  feel that it still might be a long time until we get back to what we consider normalcy. It might be a long time before we can sit comfortably again in a room filled with a few hundred people to hear the city’s mayor talk about a grand ambition for Guelph that has nothing to do with responding to a global pandemic.

So let us pause this week to remember what we’re fighting to get back to, let us a take a minute to reorient ourselves to a world without fear of COVID-19. This week on the podcast, we’re going to replay the 2020 State of the City address from Mayor Cam Guthrie, which was delivered on February 7 at the Delta Hotel and Conference Centre on Stone Road in an annual event hosted by the Guelph Chamber of Commerce.

The State of the City is part update about current events at city hall, and it’s part wishlist on the part of the mayor as he or she talks about what they want to do for the next year. It’s a victory lap, and a declaration of intent, but there’s also the breakfast event around it, which gives city leaders a chance to meet, chat and network. It’s a perfectly innocuous little event, but because it involves a political speech by the mayor, we give it a lot of attention in the media, and in the community.

So let’s once again hear the mayor’s pre-pandemic vision for the city, which includes keeping operating fees under control, creating a free transit option for young people, and starting an initiative to create car-free downtown. You will also hear about what the mayor calls a message of hope, and what the City has done to try and address the growing gap in inequality between the haves and have nots. Mayor Guthrie also talked about the clashes between cities and the Province, the tricky balancing act with the budget, and then he answered a few questions from the crowd.

Let’s go back to a pre-COVID-19 world and the State of the City on this week’s Guelph Politicast!

City council will be returning to some kind of regular order in the next few weeks; the agenda for May 11’s special meeting will be published later this week. You can also revisit Guelph Politico’s original coverage of this year’s State of the City here.

Look who was back in #Guelph today: Ontario Liberal leader @stevendelduca. He has beef with the Ford government, and an article will be coming soon to Guelph Politico. Stay tuned.
Happening soon: @mayorcamguthrie and @wdgpublichealth officials will discuss the conversion of this hockey pad in the West End Rec Centre into a vaccination clinic with the media.
So a quick update about the anti-mask event in #downtownguelph today: half the announced speakers were no shows, but Death stopped by for a minute. Local angle saw the mayor and the CAO get accused of being pawns of the UN, but it was as all par for the course. Working on a Politico post about it all.
Happening now: an anti-mask gathering is warming with shouts about hugs and smiles in downtown Guelph. Stay tuned for more.
Looking for a good cause this #givingtuesday, why not local journalism? https://guelphpolitico.ca/2020/12/01/please-support-local-news-and-journalism/
Happening now: #Guelph high school students are setting up rows of empty shoes to protest (the lack of) climate action at Guelph City Hall.