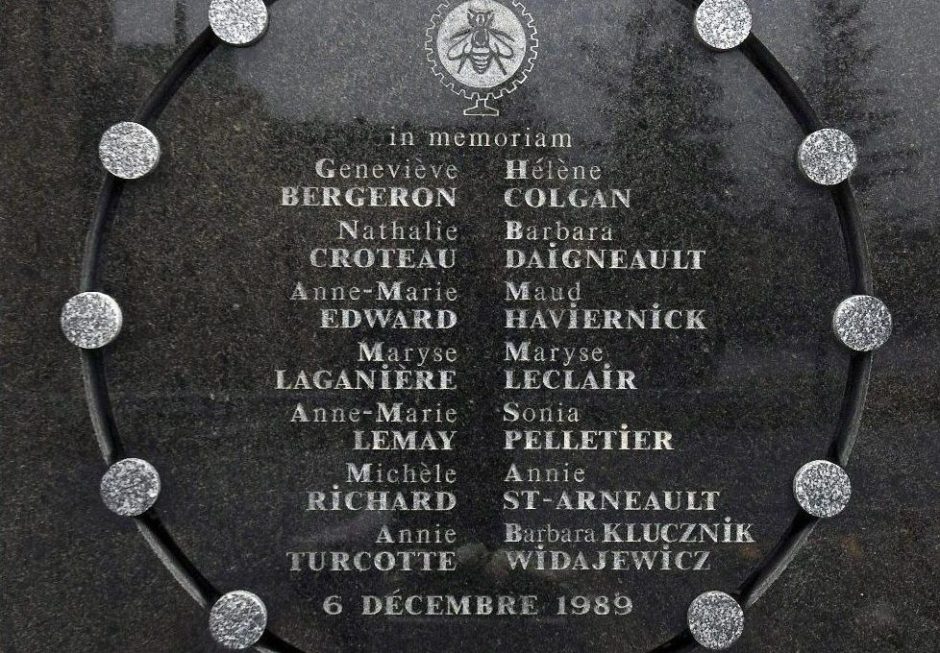 At Guelph-Wellington Women in Crisis, they deal with issues of violence against women all year round, but for everyone else, at least one day of year makes us all stop and think about femicide and gender-based violence. It’s the anniversary of the worst mass shooting in Canadian history, and it was all directed at women because the perpetrator, in his own words, was “fighting feminism” when he killed 14 and injured 10 others at L’École Polytechnique on December 6, 1989.

Before listening to the podcast, take a minute to read the names and remember them: Geneviève Bergeron, Hélène Colgan, Nathalie Croteau, Barbara Daigneault, Anne-Marie Edward, Maud Haviernick, Maryse Laganière, Maryse Leclair, Anne-Marie Lemay, Sonia Pelletier, Michèle Richard, Annie St-Arneault, Annie Turcotte, and Barbara Klucznik-Widajewicz. Most of them were at school to become engineers, and for whatever reason some angry misogynist thought that was bad. It’s the worst case scenario of gender-based violence, but it is far from the only scenario.

According to the Canadian Femicide Observatory for Justice and Accountability at the University of Guelph, a woman or girl is killed every two-and-a-half days in Canada, and these are not deaths by strangers. Nearly half, 47.7 per cent, are killed by a spouse or intimate partner, and another 30.5 per cent are killed by a parent or other family member.  Only 3.4 per cent of murdered women are killed by a stranger in the commission of a crime, which says that, statistically, women are in more danger at home than any other place.

You wonder what Guelph-Wellington Women in Crisis deal with on a daily business, and these numbers are a brief glimpse into that “day in the life of…” Like what happened at L’École Polytechnique three decades ago, the source of the struggle is the same: misogyny, inequality, control, possession, and hatred. Gender-based violence is real, and it’s daily, but it doesn’t have to be that way.

On this week’s edition of the podcast, we’re joined by Sly Castaldi and Jessica St. Peter, the executive director and public educator, respectively, of Guelph-Wellington Women in Crisis. With them, we’ll talk about what they think about every 6th of December, how the discourse around gender-based violence has changed over the last three decades, and recent social movements like #MeToo. We also talk about the role of education in eliminating gender-based violence, and the role that men need to play reaching that goal including a segment where the host must answer the questions.

So let’s talk about the issue of gender-based violence nearly 30 years after its worst case scenario on this week’s edition of the Guelph Politicast!

If you would like to get involved as a donor or a volunteer with Guelph-Wellington Women in Crisis, you can find those links readily available at their website. There are two local commemorations for the National Day of Remembrance and Action on Violence Against Women this Friday, one at the Thornbrough Building at the University of Guelph campus at 3:30 pm, and the other at Gilbert MacIntyre & Son Funeral Home and Chapel at 1099 Gordon Street at 6 pm.