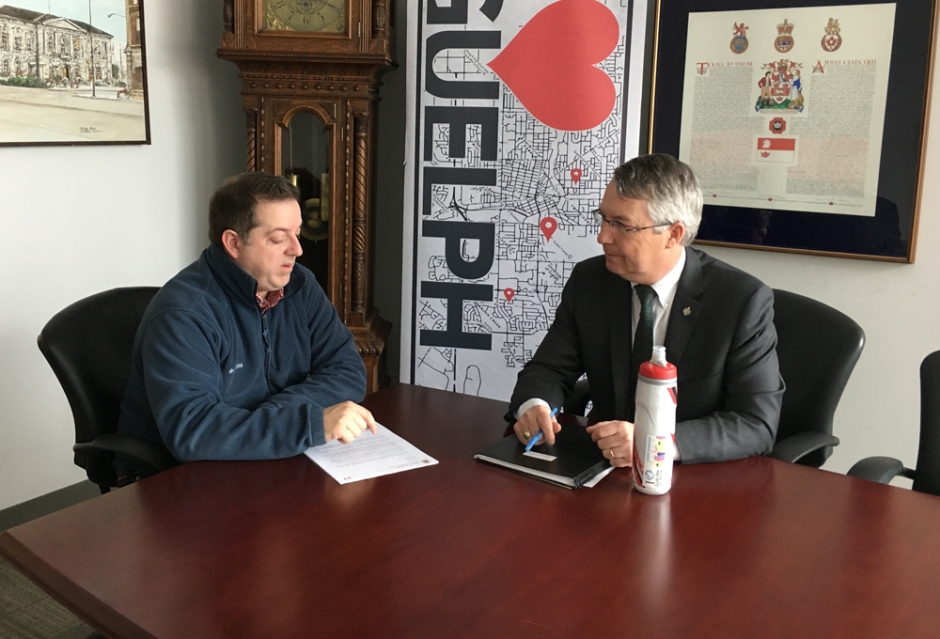 Guelph MP Lloyd Longfield works a ways from the Royal City, but he’s still working for the people in his riding. So what has he been up to lately? This is “This Week in Lloyd.”

Everyone agrees that we need more money for infrastructure, but are we getting it fast enough in the Royal City? That seems to be a concern that Longfield has, and he and Mayor Cam Guthrie met to discuss it recently according to a media release sent Thursday.

“The current Bilateral Agreement for investments requires the Province of Ontario to intake projects for funding,” the statement read. “While the Province opened rural intake this week [we’re] very concerned that the delay in opening the transit, green, community culture and recreation streams will not allow the City of Guelph to proceed with projects that are vital to the economic development of our City.”

Guthrie previously addressed this issue last month after a meeting of the Large Urban Mayors’ Caucus of Ontario (LUMCO) at City Hall. “Infrastructure and transit, and the way those [funding] mechanisms are in place to trickle down to the municipalities. This is money that’s there, and it’s just not coming,” he said.

In a letter sent to Guthrie, and shared with the media, Longfield said, “In the year since the Government of Canada and the Province of Ontario signed the Integrated Bilateral Agreement for investing in Canada Infrastructure Program (ICIP), there has been no urgency from Ontario to open intake for all of the funding streams through the Program.”

He added, “While the Province opening intake for rural infrastructure this week and public transit to open shortly is progress, I am concerned that the slow intake will cause us to lose another construction season and that good proposals from the City of Guelph and community organizations will be left languishing.”

The Ontario government announced earlier this week “new” infrastructure funding* starting with the Rural and Northern stream, which is open to cities and Indigenous communities with populations under 100,000.

In all, 500 of these communities will have eight weeks beginning March 18 to nominate road and bridge projects. The ICIP is worth $30 billion in all, and is a 10-year infrastructure program cost-shared between federal, provincial and municipal governments. The Rural and Northern stream is the first stream, and will be followed by Public Transit, Green Infrastructure, and Community, Culture and Recreation.

Last year, it was announced that Guelph will receive over $58 million in federal funding and over $48 million in provincial funding to build new urban transit networks and service extensions. A total of $20.1 billion will be spent on public transit under the ICIP.

Back in his letter, Longfield asks for Guthrie’s help to convince the Province to open the other funding streams. “After several meetings between the Minister of Infrastructures & Communities and his counterparts in Ontario, it is clear to me that the Province of Ontario is not open for business,” he wrote. “A slow and limited intake is not putting the jobs and the infrastructure the City of Guelph needs, first.”

The Federal Budget is being delivered next week in the House of Commons, and if you have some thoughts about what Finance Minister Bill Morneau delivers, then Longfield wants to hear them. Our MP will be holding a town hall on Wednesday March 27 from 6:30 to 8 pm at the Italian Canadian Club called, “Let’s talk Budget 2019.” If you, or someone you know, has a question about the 2019 Budget, then you should come. You do have to RSVP though, so call Longfield’s constituency office at 519-837-8276 or email Lloyd.longfield@parl.gc.ca if you want to attend.

The National Press has been discussing ongoing developments with the SNC Lavalin scandal, but the issue has now trickled down to the local level as even backbench MPs like Longfield are having to comment on it.

“We need to see our public institutions working, including the separation of judicial and political processes,” Longfield said in a statement posted on his website. “I appreciate what the Honourable Jody Wilson-Raybould and the Honourable Jane Philpott brought to any table of discussion, and was really disappointed that they were not able to find a way forward to continue to be Cabinet members. I know they did not make their decisions without a lot of thought and reflection.”

“I have confidence that the Prime Minister and his Cabinet will continue to reflect on what has been occurring, and work openly with Members of Parliament and our constituents to do what is best for Canada,” he added. “We have done incredibly good work on behalf of Canadians, and I am sure this will continue.”

In a follow-up interview with Guelph Today, Longfield clarified his comments saying, “[The federal government] had no intention to break the law or get around the law.”

“At what point is it interference and at what point is it just following the normal course of business of advocating for your constituents?” he told the site. “Linamar has 9,000 employees and if Linamar was under challenge, and the most recent one was the shutting down of the Oshawa facility, I was on the phone the next day asking ‘what’s the impact and what can we do to support you?’”

Regardless of the specifics, Longfield added the he understands why his constituents are concerned about the situation. “I think in the short term there’s a lot of anxiety, which isn’t good. It’s not what happens to you, it’s how you react to what happens to you that determines the outcome,” he said.

“People are rightly concerned about that because everybody should be equal under the law, including businesses.”

One thought on “This Week in Lloyd: Infrastructure, Town Hall, and SNC Lavalin”