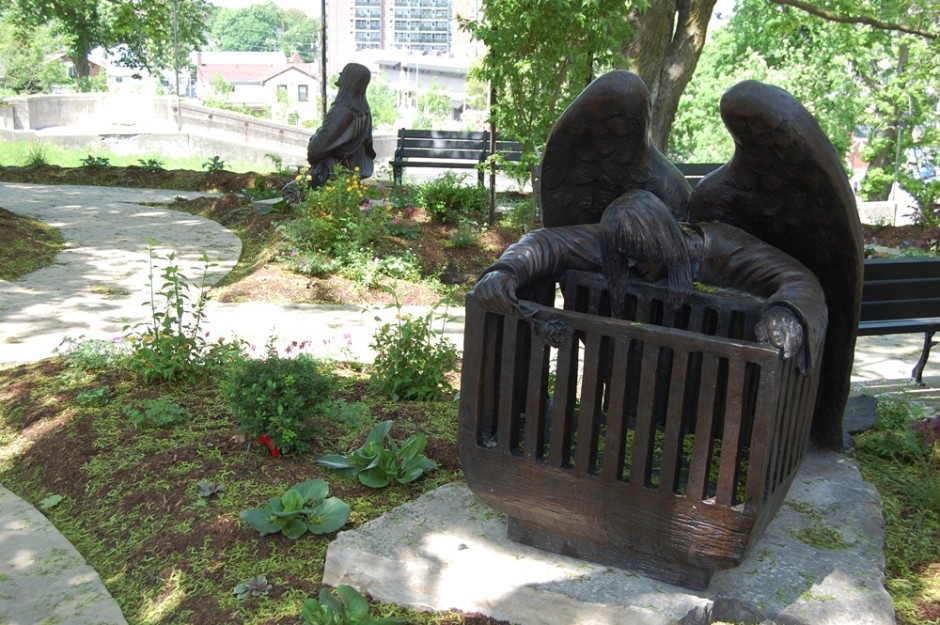 Jakki Jeffs was sweeping grass and dirt off the stone path in the Garden of Grace. Alone. Today was supposed to be the official unveiling of the Garden of Grace, a memorial park on the lands of the Basilica of Our Lady meant for people mourning the loss of a child to abortion or miscarriage, but with a group of over a dozen people demonstrating on the street below, Jeffs cancelled the opening event. Why? The matter’s gotten too political.

“We had planned the opening of [the garden] for this afternoon at two ‘o’ clock, but I wanted – if there was to be any media, I wasn’t sure – that it was about the space and not about the reaction to it,” Jeffs told members of the press at the garden today. “It was the same last time, it was about those that don’t agree with it, and then people putting into our heads why we do this: ‘They don’t care about people, they just want to make them ashamed.'”

One of the protest’s organizers agrees. “It brings shame to those that shouldn’t have to feel ashamed or shameful for their choices,” said Sarafina Bortolon-Vettor. “We have reproductive rights. No one should feel ashamed or fearful for doing something they feel is best for themselves, and we’re very fortunate to live in a country where we have access to abortion.”

Unintentionally, Bortolon-Vettor highlighted Jeff’s reason for why the garden was made. “The polarization around abortion is to stop the discussion, and I think that’s what happens when we have screaming and shouting and not sitting down to talk,” she explained. “But this garden is supposed to mark the reality that there’s been a loss, whether you chose it to happen or you didn’t, it’s a loss.”

“Is a public garden really the best place to grieve? A public space?” asked Bortolon-Vettor several minutes later back on the Norfolk St sidewalk. “Also the church doors are locked all of the time. That is supposed to be a place of sanctuary. I was raised Roman Catholic and I can’t even go into the church any day to not even pray, but maybe reflect. So I don’t understand why there was nearly $100,000 spent on a garden and why they couldn’t have helped women who have had their babies.”

Jeffs’ said Right to Life does both, that her group supports organizations like Michael House, which provides shelter and support for pregnant and parenting young women in the area. “You may not like my stance on abortion, but it comes from a long history of helping women and listening to women,” Jeffs explained. “All you hear about is ‘there’s that miserable woman saying that abortion is wrong again.'” 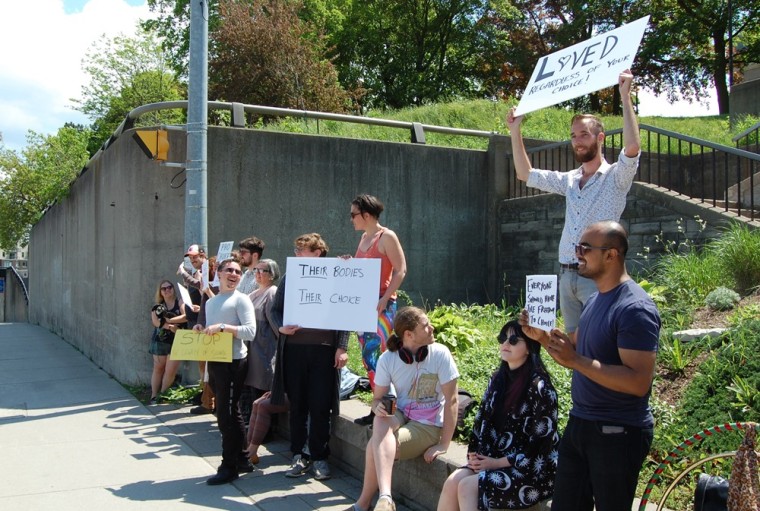 So I had a proposition: would Jeffs like to meet one of the organizers of the protest right then and there to talk about their respective issues? “Yeah of course, but it would be private in my office. They are always welcome, they have always been welcome,” Jeffs said. “If you are struggling with what we’re doing then why not come and talk about it? We’ve always been able to talk. But once again, all these years, it’s never been about discussing our position, it’s about yelling at us about we believe.”

So I asked Bortolon-Vettor later, would she meet with Jeffs on this day? “Yeah, absolutely. Maybe not right now because we’re doing our protest, but at any point in time I would love to talk with Jakki,” she said adding that they had reached out to Right to Life in the past. “One of our friends sent a message to Right to Life, but there was no response.”

So Rome wasn’t built in a day… Of course, with the differences of opinion between these two women, we shouldn’t be holding out for hope of any detente on abortion in Guelph anytime soon.

“To direct the intentional killing of a child through abortion is never a medical necessity. Not ever,” said Jeffs when asked about the lack of abortion facilities in Guelph aside from Guelph General Hospital. “A life and death situation does not mean the intentional killing of a child. You can remove it and with the technology that we have, we can try and make that baby live. It’s not medically indicated for anything, it’s all about economics, or choice, or whatever.”

For the record, medical professionals cite a number of reasons for a medically prescribed abortion including severe infections, heart failure and severe cases of preeclampsia, a condition in which a woman develops very high blood pressure and is at risk for stroke. That was from Erika Levi, a obstetrician and gynecologist at the University of North Carolina, Chapel Hill, who told USA Today, “There are certain cases where ending the pregnancy is the only option, cases where it would be putting the mother’s life at risk to continue the pregnancy.”

Back on the street, Bortolon-Vettor said that the message of Right to Life on their website differs from some of the comments she’s heard from Jeffs on the idea behind the Garden of Grace. “I would be open to chatting with her, but I don’t really see what the end result will be because my stance is pretty firm towards the statue that vilifies people who’ve had abortions,” she said referring to a statue of an angel mourning over an empty crib. “It’s very morbid.”

For now, Jeffs said that Right to Life will wait and see about holding some kind of official dedication, but notes that there’s already been heavy traffic through the garden. She was told by one of the Basilica’s priests that “swarms of people” have visited the site.

In the meantime, Bortolon-Vettor said that her group will be watching and waiting to hit the streets outside the Basilica again. “We’ll keep our eyes peeled. We’ll be here at every single date and time that they say they’re going to have their grand opening.”