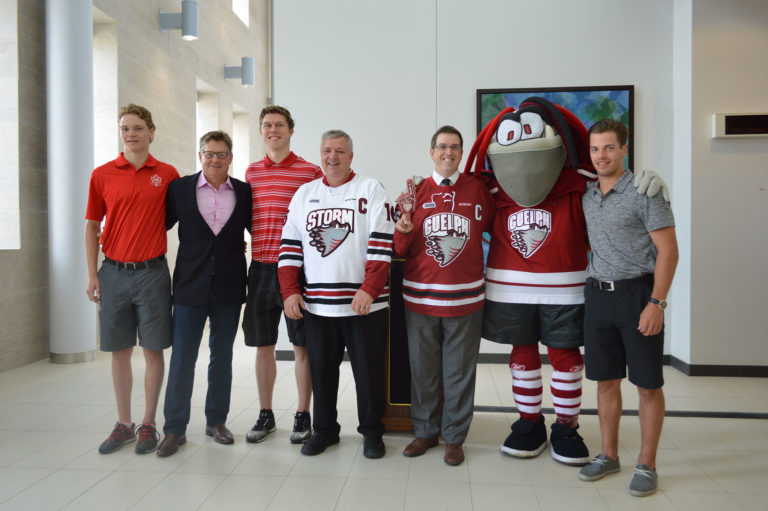 At City Hall this morning, in the heat of midsummer, the City of Guelph announced that Guelph Storm hockey will be sticking around in the Royal City for the next decade. That’s good news since the Storm is the anchor tenant for the Sleeman Centre, but it still leaves a substantial hole in the City’s bottom line.

First, the good news. “The Ontario Hockey League market is an increasingly competitive place, and cities across Ontario are knocking on the doors of successful teams like the Guelph Storm in hopes of hosting a team, because they too know of the immense benefits it can bring,” said Mayor Cam Guthrie in the press release. “The last thing I wanted was for Guelph to lose the Storm to another community. In today’s competitive market, that’s always a very real possibility, and my kids would have killed me!”

Buried in that release though is that news that net impact of the agreement on the city’s operating budget is $500,000. That’s not a hard and fast figure, of course, the impact could come down depending on how well the games sell-out and how long the Storm season lasts (meaning should they make the play-offs).

Numbers are hard to come by, but the Guelph Mercury last fall posted that the Sleeman Centre had made $2,609,969 in 2015 with expenses costing $2,879,646, meaning that the centre had a negative variance of $269,677. That’s before the estimated $100,000 in parking revenue, but without it, the money made from all events at the Sleeman Centre in 2015 couldn’t cover a quarter of a million dollar gap, and keep in mind that most of those events were Storm games, and this was a year in which they made it to the second round of the play-offs.

On the City’s website, the Sleeman Centre is billed as a “modern, well equipped 5,000-seat facility is an ideal choice for sporting and family events, trade shows, conferences and large-scale concerts and public ceremonial events,” along with a list of events its hosted in the past. But think of this: when was the last time you attended something at Sleeman that wasn’t a Storm game?

The question of whether or not facilities like Sleeman have been a net asset to the City has lingered many years now. In 2012, then-Ward 1 Councillor Jim Furfaro wondered if Guelph was better off financially without Sleeman, or the River Run Centre. “I think we need to take a look at whether those facilities would be attractive to private ownership,” Furfaro told the Guelph Mercury. “They’re costing us money every year … and they’re not generating a lot for us. […] Possibly private enterprise could make those facilities profitable and we could generate some revenue we could put to better use elsewhere in the city.”

Furfaro’s successor on council, Dan Gibson, spoke about that possibility as well earlier this year on Open Sources Guelph. “These are the types of honest questions constituents expect from their councillors,” Gibson said. “Part of the Sleeman Centre question is ‘Why? Why are we missing out on events?’ I have heard various reasons why, parking being an impediment, the fact we can use an upgrade to our sound or our stage equipment… Unless the act is big enough, they don’t bring that type of equipment on the road with them, they expect us to have it for them.”

Today though, this is a good news story. “The Guelph Storm are a vibrant part of our city in so many ways, economically, socially, wonderful entertainment and perhaps most of all, a great source of civic pride,” said Storm Governor Rick Gaetz. We are thrilled to have extended our relationship for at least another decade as our gifted young men attempt to bring another championship to our great city.”

At least cheering on the Storm is something we can all get behind.