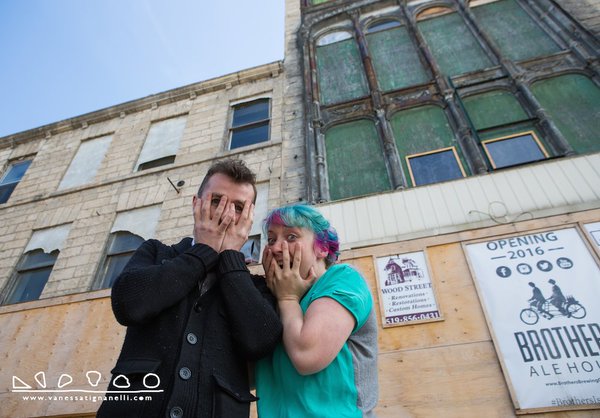 Comedy is big business in Guelph. Who woulda thunk it? Guelph has been long known as a destination for artistic works, unique music festivals, and accomplishments in filmmaking and media art, and now the Royal City is staking a claim to comedy. If there is a comedy revolution in Guelph, then the Making-Box is ground zero, and this week, the Guelph Politicast goes inside with the two people behind the wave.

Meet Hayley Kellett, who describes herself as an improviser, writer, actor and puppeteer. Amongst her accolades are a Canadian Comedy Award for Best Female Improviser (2015), being named NOW Magazine’s Best Female Improviser of 2015, and kissing Colin Mochrie on the mouth. She’s an instructor at the Second City Training Centre and The Making-Box, and she brings a wealth of comedy and improv experience to the table as she helps the Making-Box grow through both its educational and performing programs.

Working by Kellett’s side is Jay Reid. Fresh off hosting the Guelph Chamber of Commerce’s Awards of Excellence, he was recently named one of Guelph’s Top 40 under 40, and is the co-founder of The Making-Box. Reid also has the titles of Regional Director and National Trainer of the Canadian Improv Games (CIG). Reid is the face of the Making Box, at once its driving force on the business side and its smiling, excited face of promotion.

Way back in October 2014, the Making-Box was supposed to be around for a month. It was an experiment of sorts, testing the waters to see if Guelph had an appetite for what Reid and Co. were offering, and boy, were they. In less than two years, the Making-Box has established itself as the preeminent name in comedy in Guelph, and, through word of mouth, their improv programs have become enjoyable endeavours for individuals looking to improve themselves and businesses* looking to team build. The Making-Box, in return, has been built up, and is now ready to move from what was once its temporary home at 40 Baker Street to a new made to order facility in the Petrie Building complex.

*Full confession: I participated in an improv workshop when CFRU had their annual general meeting last fall at the Making Box.

So for this edition of the Guelph Politicast, I talked to Kellett and Reid about the rapid evolution of the Making-Box, how big they want to get (watch out Second City), and why so many people have come through their doors to say “Yes and…” It’s almost trite to say “If you build it, they will come…” but in the case of the Making-Box, they really did build it, and Guelphites have come and continue to come.

So let’s head to the Making Box for some serious talk about comedy!

Learn more about the Making Box at its website, and its social media platforms on Facebook, Twitter, and Instagram. If you’re interested, you can also contribute to the Making Box’s Kickstarter, which is now over 75 per cent funded with a little more than two weeks to go.