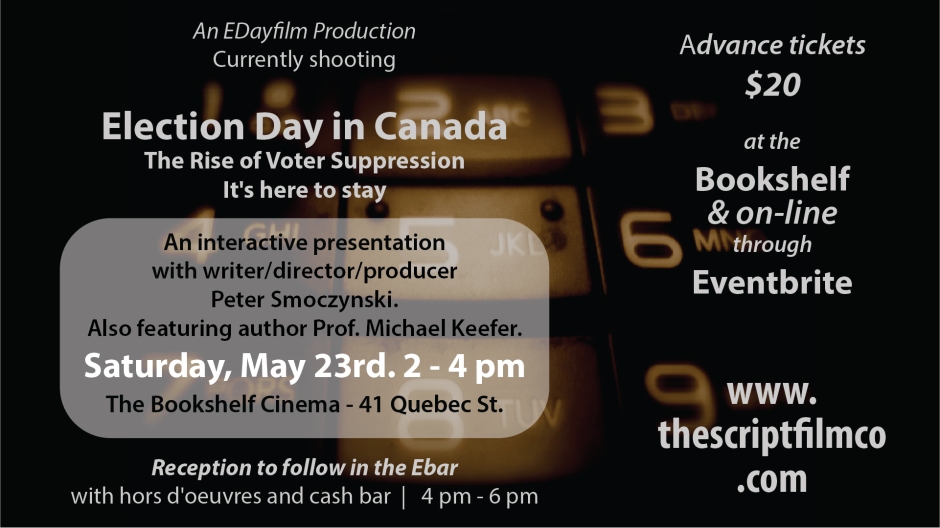 If you’re still concerned about the events of the 2011 Federal Election, and the robocall scandal that attempted to disenfranchise thousands of Guelph voters, then you’re going to enjoy this night out at the movies. Ottawa filmmaker Peter Smoczynski is bringing his new documentary to Election Day in Canada: The Rise of Voter Suppression to the region in a couple of weeks for screenings in Guelph and Waterloo. It seems that the project is still unfinished, so this is more of a preview screening, but the closer we get to this fall’s Federal Election it seems the more that people are piling on with remembrances in various media of just what happened back in May 2011.

Fair Vote Guelph and the local chapter of the Council of Canadians are revisiting the Robocall Scandal and the 2011 Voter Suppression this month with a week-long visit from documentary filmmaker Peter Smoczynski.

Ottawa-based Smoczynski is in production on a documentary: Election Day in Canada: The Rise of Voter Suppression. His visit to Guelph will mark the launch of a cross-country expedition for the final leg of shooting and fundraising for this independent film.

Fair Vote Guelph, the local Chapter of the Council of Canadians and Fair Vote Waterloo Region will be hosting three different events:

Thursday, May 21st 7:00 – 9:00 pm.
The Board Room, Heuther Hotel, 59 King St. N in Waterloo. Hosted by Fair Vote Waterloo. Free admission and pass the hat donations for the film.

Saturday, May 23rd, 2:00 – 4:00 pm.
This event in The Bookshelf Cinema will mark the official launch of Smoczynski’s cross-country tour. University of Guelph Professor Emeritus, Michael Keefer, will join the filmmaker for this presentation. Professor Keefer is working on a book on the 2011 Vote Suppression. Admission is $20 and includes a reception in the E-Bar with hors d’oeuvres and cash bar.

Each presentation will include compelling interview footage completed to date, as well as highlights from research underpinning the film. Interview subjects include MP Irwin Cotler, former Chief Electoral Officer Jean-Pierre Kingsley, investigative journalists Stephen Maher and Glen MacGregor and figures from the Council of Canadians legal challenge, lawyer Steven Shrybman and pollster Frank Graves. The audience will have an opportunity for a Q &A interaction with the filmmaker.

During the week Mr. Smoczynski will be shooting additional interviews here in Guelph – the epicentre of the 2011 Robocall Scandal.

If you were a recipient of one of the fraudulent Elections Canada calls, or know someone who was, please get in touch with Fair Vote Guelph at guelph@fairvote.ca

Tickets for the Bookshelf event, Saturday, May 23rd will go on sale Friday, May 8th at the Bookshelf and on-line through Eventbrite.

In case you haven’t yet, you can listed to Open Sources/RadiOPIRG’s interview with Party of One author Michael Harris, who addresses the robocall scandal over three chapters in that tome.